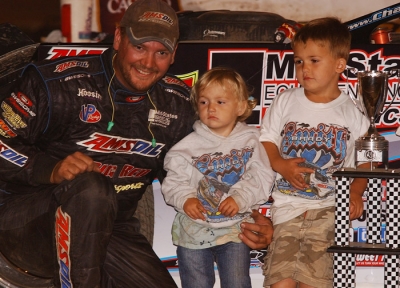 NEW RICHMOND, Wis. (Aug. 1) — Polesitter Brady Smith of Solon Springs, Wis., won a lengthy duel with Ashley Anderson of Eau Claire, Wis., for a $5,000 WDRL victory in the makeup of a June rainout at Cedar Lake Speedway. Smith lost the lead to Anderson on the 23rd of 50 laps, then fought back following a lap-28 caution to go back out front on lap 32. | Slideshow

"I can't say enough about what a great job Ashley did," Smith said. "He raced his butt off. We raced our butt off — luckily things went our way."

Smith built a comfortable lead over the next 15 laps, but Anderson got close enough at the finish to make it interesting. Smith held on by a length to win his seventh career WDRL event and first since last September. The 10th-starting Anderson was denied his first WDRL victory in finish second ahead of Jimmy Mars of Menomonie, Wis., 18th-starting Scott Gilbert of Sand Creek, Wis., and 16th-starting Nick Anvelink of Navarino, Wis. Justin Fegers of Mound, Minn., started outside the front row and led the first five laps, but he pulled pitside after a frontstretch tangle with the slower car of Paul Hipsag.