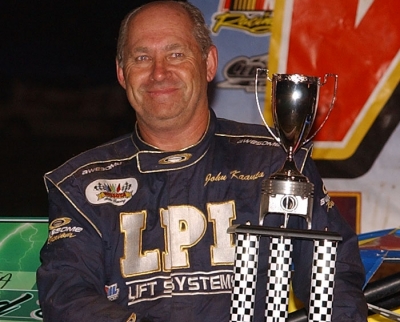 NEW RICHMOND, Wis. (July 31) — Although he's leading the World Dirt Racing League points, John Kaanta of Elk Mound, Wis., doesn't get caught up in studying the numbers. If it was up to the 54-year-old retired sheriff, he wouldn't even know he was in a points chase at all. | Slideshow

"People tell me, but I don't look at 'em myself," the 2007 WDRL rookie of the year said. "Like I've always said, one race at a time and the points take care of themselves."

The points are definitely taken care of when Kaanta runs as strong as he did in a weeknight show at Cedar Lake Speedway. Starting third in a feature that served as a tuneup for Cedar Lake's huge USA Nationals weekend, Kaanta slipped past polesitter Adam Hensel on the 11th lap and wasn't challenged the rest of the way en route to his third WDRL victory in the last five series events.

"The car was really good. (Son) Tony (Kaanta) did a good job of getting it going," said Kaanta, who faced an impressive field of 50 cars as many top traveling racers prepped for the weekend's $50,000-to-win event. "With the field of cars tonight, I don't even know if I believe it myself. It was great."

Hensel, a dirt-turned-asphalt racer returning to his original surface, was in control through the early laps, but Kaanta was stalking him after a half-dozen laps and made the winning move on the inside groove on the 11th lap and began scooting away. He built a half-straightaway margin before traffic slowed his progress near the midpoint, and the field was bunched on lap 26 when Kevin Weaver slowed in turn four to bring out the first of two cautions. Jack Sullivan of Greenbrier, Ark., making his first appearance at Cedar Lake, held the second spot on the restart with Darren Miller of Milledgeville, Ill., Ashley Anderson of Eau Claire, Wis., and 11th-starting Jimmy Mars of Menomonie, Wis., filling the top five.

Kaanta edged comfortably away after a few laps as Sullivan's car tightened up. Mars, who quickly jumped into third shortly after the midway restart, took second from Sullivan on lap 33 and kept Kaanta in his sights. Mars was 10 lengths behind when a lap-42 caution waved for a Justin Fegers-Jeremy Grady collision in turn four.

Mars sized Kaanta up on the restart, but Kaanta eased away without a challenge and won by nearly a half-straightaway at the 3/8-mile western Wisconsin oval. Mars was second followed by Miller, Anderson and Sullivan. Hensel, using a WISSOTA spec engine in a field where open-competition powerplants dominated, faded to finish ninth.

Adam Hensel topped the six-lap dash to earn the pole for the 50-lap feature. He dueled side-by-side with fellow front-row starter Ashley Anderson for the first two laps before Anderson pulled to the infield. Fourth-starting Denny Eckrich disposed of third-starting John Kaanta and tried to close in on Hensel, but he couldn't make a serious challenge for the lead.

Polesitter Brian Birkhofer cruised to an easy 12-lap victory to transfer to the feature event as he won by more than a full straightaway in a dominating runaway. A tight battle developed behind him for the second spot with Will Vaught and Chris Simpson running side-by-side for several laps. Vaught, driving Bill Frye's No. 66, edged ahead in the closing laps to finish ahead of Simpson while Matt Miller and Wendell Wallace were also in the mix.

Third-starting Justin Fegers got rolling on the high side in midway through the race and overtook race-long leader Frank Heckenast Jr. on the ninth of 12 laps. Heckenast, who started on the pole, held on for second while Chris Wall got the third and final transfer spot. Former USA Nationals winner Billy Moyer (who started 10th) and Scott Bloomquist (who started near the tail) were among drivers failing to transfer. Nearly half the field was involved in a turn-three scramble on the second lap that jumbled the field. Bryan Wennen was scheduled to start on the pole but elected to start on the tail.

Seventh-starting Denny Eckrich worked around race-long leader and polesitter James Ward with just two laps remaining to win the final heat race. Ward held on to finish second in the caution-free event while Scott Gilberts, the night's overall fast qualifier, held on for third against a tail-starting Jack Sullivan in the final laps.

Jake Redetke outduele polesitter and fellow front-row starter Joey Jensen over the first few laps and edged away for a 10-lap victory in the caution-free prelim. Jensen held on to finish second while fifth-starting Jimmy Mars, who tried the high and low grooves in trying to catch the frontrunners was third, just ahead of third-starting Brian Birkhofer.

Third-starting Ashley Anderson slipped under race-long leader Jeff Provinzino on the sixth lap and cruised to a victory in the low groove. Keith Foss took advantage of a late restart to move up to second while Provizino was third ahead of Kevin Weaver. The race's lone caution appeared on the final lap when polesitter Nick Anvelink, who slipped back in the early laps, spun in turn four.

Brady Smith started outside the front row and raced to a relatively smooth victory in a race marred by several early skirmishes. Smith outran runner-up Curt Martin, who started fifth, by a half-straightaway at the checkered flag. Darren Miller was just behind Martin in third while Frank Heckenast Jr. ran a distant fourth. Cautions slowed the action early. Steve Hucovski did a 360-degree spin exiting turn four on the first lap but kept it going. Chad Simpson got into the turn-two wall on the second lap and departed with right-front suspension damage. Andrew McKay spun in turn four on an early restart. On another early restart, polesitter Matt Furman got up against the backstretch wall and Justin Fegers briefly climbed onto the left rear of Furman's machine before disconnecting the cars.

Fourth-starting Adam Hensel got rolling on the high side midway through the 10-lapper, built a comfortable lead, then held off a last-ditch charge from seventh-starting John Kaanta for a victory. Polesitter Will Vaught led early but faded midway through the race to finish fourth behind Hensel, Kaanta and Jeremy Grady, who lost the second spot to Kaanta late in the race. Scott Bloomquist's race ended on the second lap when he slid into the infield and flames began shooting up from the engine compartment. Officials swarmed the car the keep the fire in check and heavy smoke arose as Bloomquist climbed from the car with his helmet on. He wasn't injured.

Gilberts was the only driver to crack the 14-second mark with a 13.975-second lap. Unofficially, the rest of the top five in qualifying: Eric Pember of Pittsville, Wis. (14.044); Chris Simpson of Oxford, Iowa (14.072); Justin Fegers of Mound, Minn. (14.080); and Adam Hensel of Barron, Wis. (14.082). They'll each start fourth in each of the five heat races. The top 18 in passing points from the heat races will be locked into the feature with the top eight running a six-lap dash to set the first four rows of the 50-lap feature. Consolation race transferrees and provisional starters will fill the remainder of the 26-car field. The 50-lap feature pays $5,000 to the winner but has no effect on the USA Nationals action set for Friday and Saturday.

The June 14 WDRL rainout, originally scheduled for tonight, will be run Friday night. The feature field is set for that $5,000-to-win event. ... Super stocks are the support class for Thursday's action. ... Bill Frye protege Will Vaught of Crane, Mo., is driving Frye's car in Friday's action. Frye, who was lured to Cedar Lake by a grassroots push to fund a driver's trip to Cedar Lake, will run the car in the USA Nationals. ... Among first-time drivers at Cedar Lake are Louisiana drivers Chris Wall and James Ward. ... Kevin Weaver of Gibson City, Ill., a regular at the USA Nationals through most of the 1990s, made his first trip to Cedar Lake in eight years. Weaver has won his last two starts during a week-long stretch of racing in Illinois as he took the points title on the Monster Midwest Tour. ... Among other drivers on hand: last year's USA Nationals winner Brian Birkhofer, multitime USA Nationals winner Scott Bloomquist, Darren Miller, Matt Miller, Pat Doar and Jimmy Mars along with most of the WDRL regulars. ... Some drivers on hand aren't in competition tonight, including Michigan's Jeep Van Wormer.