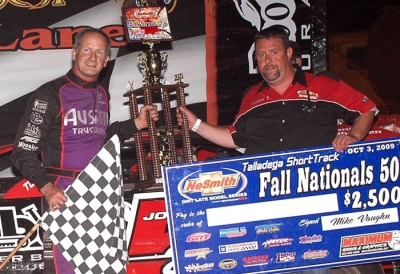 EASTABOGA, Ala. (Oct. 3) — Ronnie Johnson of Chattanooga, Tenn., took the point from race-long leader Derrick Rainey of Powder Springs, Ga., on the 21st lap and led the rest of the Fall Nationals 50 at Talladega Short Track. Johnson earned $2,500 for his third victory of the season on the NeSmith Chevrolet Dirt Late Model Series.

Johnson, who started fifth and used the outside groove to work his way to the front of the pack. The victory was the 11th series career win for Hall of Famer driving the Miller Bros. Coal Warrior.

“Just love this racetrack because it’s always racy, like it was tonight, and I also love the fans here,” Johnson said. “The car worked great on the outside, but I had to get to the bottom to work through lapped traffic, and it was also good down there."

While Johnson pulled away from the rest of the field, Danny People of Margaret, Ala., topped an exciting four-car battle at the end of the race to take the second spot. Rookie Ben McCreary of Baldwyn, Miss., was third followed by Todd Morrow of East Ridge, Tenn., and Tim Busha of Boaz, Ala. Rainey, the fastest among 56 qualifiers, ended up seventh.

After Oct. 16-17 series events at South Mississippi Speedway near Pass Christian, the tour returns to Talladega on Oct. 22-24 for a non-points series event, the $10,000-to-win Red Top Auto Auctions Dega 100.