Nightmares over, Dream No. 7 salves Bloomquist 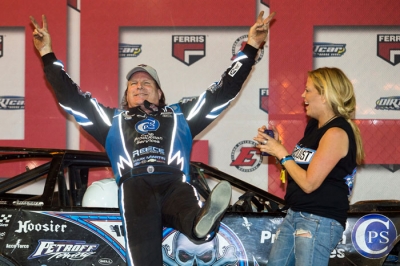 ROSSBURG, Ohio (June 10) — Everyone should have known it was pure madness to pick against Scott Bloomquist in Saturday night’s Dream XXIII presented by Ferris Mowers at Eldora Speedway. | Complete Dream coverage

With the Hall of Fame driver back in action at the famed half-mile oval after missing last September’s World 100 while serving a DIRTcar Racing suspension stemming from a tire-related infraction during the Dream three months earlier, the stage was perfectly set for him to add to his Eldora legend. Unsurprisingly, Bloomquist delivered.

Bloomquist, 53, of Mooresburg, Tenn., ran away with his unprecedented seventh career $100,000 Dream victory, proving once again his sublime powers behind the wheel of a Dirt Late Model. He punctuated the triumph with Crotch Chop 3.0, his now-famous postrace gesture that provides visual evidence of just how meaningful a moment is to him.

“Somebody said to me, ‘You gonna do that (crotch chop) when they introduce you out there (before the feature)?’” Bloomquist related while talking with press members in Eldora’s infield media center following his victory lane celebration. “I said, ‘No.’ Then after the race I thought it was all right.

“It was a little bit sweet,” he continued, describing the significance of winning in his return to the Big E. “Not revenge, but a little bit of sweet satisfaction to be able to come back and win.”

Bloomquist’s Eldora tribulations of 2016 — and, to some extent, ’15 as well — certainly provided the incentive that a competitor of his vast talent uses as a motivator. At the ’15 Dream, of course, he lost an apparent victory in the 100-lap finale because his car weighed in light following the race. One year later, he didn’t qualify for the Dream feature and had insult added to injury shortly thereafter when he learned he was one of five drivers disqualified from all their weekend results for using a tire that lab tests determined did not meet the manufacturer baseline. The penalties that accompanied the tire DQ included fines and a 90-day suspension from DIRTcar- and World of Outlaws Craftsman Late Model Series events, knocking Bloomquist out of the World 100 field for the first time since the year before he won the 1988 edition of the race in his first visit to Eldora.

While Bloomquist stayed busy during last year’s World 100 by entering a $40,000-to-win open-wheel modified event at Mississippi Thunder Speedway in Fountain City, Wis. (he earned $20,000 for finishing second), he conceded when questioned that he had the happenings in Rossburg, Ohio, at least somewhat on his mind.

“Oh, yeah, I did,” Bloomquist said. “I guess what made it a little easier, though, was me thinking that the tire rule (Eldora debuted a new mandate at last year’s World 100 that prohibited teams from siping and grooving tires) was gonna be a huge mistake and that the race was gonna be messed up because of it. I thought it was gonna be just a tire catastrophe.”

But, after Bloomquist “heard (the tire rule) wasn’t that bad,” he began to miss racing at Eldora a bit more than he initially had. His desire to return for this year’s Dream served as perhaps the primary factor in his April decision to fulfill the obligations necessary for him to regain his eligibility to compete in DIRTcar and WoO events, which remained indefinitely off limits to him even after his suspension period expired because Bloomquist joined the other drivers and teams suspended at the Dream to sue DIRTcar’s parent company, the World Racing Group, and Eldora for a combined $16 million in an effort to overturn the disqualifications. While the lawsuit was dropped without prejudice in the fall, Bloomquist had to pay his fine for the tire DQ and sign a waiver pledging he would not file any further legal action against WRG and Eldora in order to race again in DIRTcar and WoO shows.

Bloomquist maintains his innocence in the tire controversy — as well as his ’15 Dream weigh-in DQ that he included in the original lawsuit — but he acknowledged during his meeting with the media on Saturday night that the time to put the legal proceedings aside had come.

“That’s the thing with all the talk about the lawsuit and different things,” Bloomquist said. “You know, it’s not anything anyone really wanted to be a part of or wanted to do. Nobody likes people who sue people. It was just so frustrating to go through that and know where you stood in the right and wrong, but just not … (to continue pursuing the situation) was really just gonna be such a downer for fans, such a downer for myself. I’ve got way better things to do than go to court and sit and listen.

“It’s not about money. It was more about trying to prove that people make mistakes — and we still are real confident that the lab made mistakes on that one.”

Bloomquist determined that he simply had to be back at Eldora for this year’s Dream.

“This place is the place you want to do it,” he commented. “The crowd, the competition, the racetrack — there’s very little racetracks like this. Knoxville, Iowa, we love racing there, but other than that racetrack, this is it.

“We just thought about it, and it wouldn’t have been right if we wouldn’t have come here. I’m not saying I don’t have a lot of years left (as a driver), but I’m definitely in my winter years, not my summer years. We’re wanting to be a part of this place and all the other major events and finish our career out as best we can.”

Bloomquist needed all of his trademark laser-focus to make a success of his Big E return. He came back to a decidedly different landscape with the Dream using the same no-siping/no-grooving rule for all four tires on the car that had been instituted for the World 100. While Bloomquist has been racing all this season under the Lucas Oil Late Model Dirt Series tire rule that doesn’t allow siping and grooving of the right-rear tire, the Dream was his first experience using untouched (except for “light buffing”) Hoosier LM 20-compound tires on three corners and an LM 40-compound tire on the right-rear.

“I was very concerned with the tire rule,” Bloomquist said. “I’ve never run with three 20s and a 40, so I didn’t know what it was gonna do. We ran 25-lap races (preliminary features on Thursday and Friday) that gave me kind of a hint. Everything seemed fairly well, but you just don’t know. There’s a whole lot of people who don’t know. You go out there and light up and you’ll take off and somebody will just go, and then just instantly they take a run to the back. That’s what you’ve got to be careful of, and that’s what I think I’ve had a good feel for every time I’ve come for. In the past you had to look out for that even when you had hard tires … you overcharge the corner, you start pushing and sliding too much, and your tires are gonna talk back to you — and not in a good way. You gotta know when to slow down, not be worried about letting a lapped car get back out ahead of you a little ways — just get your tires back under you, make another run at him.

“Whatever they’ve done to the dirt (surface) here, it amazes me that three 20s can run 100 laps here and still steer the car and the car still work. With the old dirt that they had here, you could run three 40s and one 20 and your front end just started shoving terribly. All the races we won we usually had three 40s on and at least a 30 on the left front — and sometimes even the 30 would quit with 30 to go.

“With the past surfaces that have been on the racetrack, (the tire rule) would’ve been a disaster,” he added. “The track just stayed right there where it was slow and slick enough. It just polishes up, it doesn’t get abrasive. I’m still in amazement that the tires still steered and ran all night for that many laps. I mean, I just looked at the right-front and I just thought, I’m amazed that there’s that much rubber left on it.”

Bloomquist expertly handled the conditions in the Dream feature, calmly stalking leader Brandon Overton of Evans, Ga., until bolting ahead for good on lap 56. He pulled away with ease to take the checkered flag about a full straightaway ahead of New Berlin, Ill.’s Brandon Sheppard, the 24-year-old Rocket Chassis house car driver, and the 26-year-old Overton.

After Bloomquist completed the distance, he had a little fun. Well aware of the raucous postrace scene that broke out following the 2015 Dream when he received the thumbs-down from officials for weighing in light, he crawled slowly onto the scales this time, keeping the red light on long enough to get the crowd roaring before it turned green and he headed for the winner’s stage.

“Well,” he said with a sly smile, “we just wanted to sit there and make everybody think about it.”

Bloomquist wasn’t worried about a reprise of his crushing ’15 DQ.

“I had no doubt,” he said. “We loaded up (on weight). Before the race, I discussed (weight) with (crewman) Cody (Mallory). He had it all figured out on paper and I said, ‘Forty (pounds) more. We’re not even gonna get close tonight.’ I think we were 60 over.”

Bloomquist unabashedly reveled in the deafening mix of cheers and jeers that he received from the huge Dream crowd, which clearly enjoyed having him back.

“It’s something that doesn’t have an affect on the outcome of the race, I believe, but it takes both (supporters and detractors reacting) to make that much noise,” said Bloomquist, who registered his 11th Dream podium finish (he also has two runner-up and two third-place finishes) in 20 career feature starts. “It makes me smile that that so many people have some kind of emotion toward us.”

He paused, and then concluded with a laugh, “They say if you hate someone you obviously have enough emotion about ‘em, so you might be able to love ‘em.”

“We just thought about it, and it wouldn’t have been right if we wouldn’t have come here. I’m not saying I don’t have a lot of years left (as a driver), but I’m definitely in my winter years, not my summer years. We’re wanting to be a part of this place and all the other major events and finish our career out as best we can.”