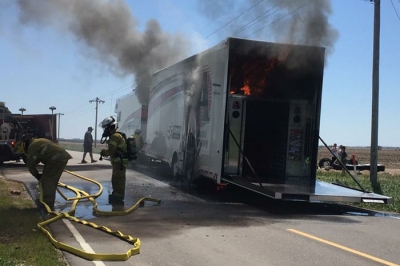 With his race-car trailer ablaze Friday afternoon alongside the highway moments after leaving his Marquette, Neb., race shop, it wasn’t long before Kyle Berck came to the grim realization that he and his crew faced the impossible task of saving his race car.

“In reality, you’re making decisions as fast as you could,” the 47-year-old Berck said the morning after the devastating fire. “But, behind the scenes, knowing in my heart there was nothing we were going to be able to do.”

The fire on state highway 41D just north of Hampton, Neb., triggered by the race trailer’s overheating brakes left the trailer a total loss along with Berck’s Missile Chassis — “the most perfectly detailed car, the Cadillac of race cars,” Berck said — and nearly ended the five-time Malvern Bank Late Model Series champion’s season before it began.

While no one was injured and team members returned home in the team’s truck, Berck was disconsolate with the Malvern Bank tour’s season opener starting later that evening at Crawford County Speedway in Denison, Iowa.

“I was ready to just come home and be done,” Berck said. “I was pouting. I was emotionally spent. I had no sleep in the last 30-plus hours (from putting the finishing touches on the car). I was more prepared than any year I can remember. And all of it’s gone, plus hundreds, pushing 1,000, hours (of work) is gone. I was just ready to go home and be done with it.”

The team wouldn’t hear of it.

Berck’s sister Belinda, a long-time key cog in his racing program, began making calls, and the team eventually connected with Hall of Fame racer Steve Kosiski, whose son Brian competes on the Nebraska-based tour. The elder Kosiski made arrangements for crew members to bring the team’s backup car from Omaha, and Berck headed toward Iowa in a pickup with his salvaged, smoke-smelling helmet in hand.

Arriving just in time to compete, the tour’s all-time winningest driver posted a 10th-place finish at Crawford County and plans to field Kosiski’s car again Saturday at Junction Motor Speedway in McCool Junction, Neb. After that he’ll go back to work on a bare-frame Missile Chassis in his shop to prepare for Memorial Day weekend action.

“It’s just a hard pill to swallow. But it is just stuff. It’s the time and money. We’ll overcome that,” Berck said in a phone interview. “Somebody said, ‘In a few months, this’ll all seem like nothing.’ But I said, ‘Well, this one might take a year or so.’ ”

A beautiful, sunny Friday started with the team spray-waxing his orange-and-white No. 14 Late Model, rolling it out in front of the shop for a few pictures, then hitting the road for the three-and-a-half hour ride to Iowa.

Berck’s father was driving and Kyle was trying to get some rest before the race when shaking and vibration of the trailer signaled the first hint of a problem. When Berck climbed out of the track, he realized it was major trouble.

“I got out and, holy moley, the left side of the trailer, it was already a slight little flame and I could hear it sizzling,” he said.

Berck scrambled to get two jugs of water, but the flames were even higher when he returned to the fire. Other tires began blowing out because of the heat, and throwing water on the tires did little but “sizzle like I was frying eggs on ‘em,” Berck said, with the hubs and grease feeding the fire.

They called 9-1-1 and did what they could with the water they had — “you might as well as peed on it,” Berck cracked — when he realized that the trailer was likely lost but there was still an opportunity to get the race car out.

But when they raised the liftgate up to bring the car down, the liftgate nearly immediately malfunctioned because the liftgate's electronic controls were at the heart of the fire. Still awaiting the arrival of fire trucks from Hampton, the crew’s efforts weren’t going to be enough.

The team unhooked the truck and got as many items out of the trailer as possible before the smoke was too thick, and the volunteer fire crews arrived and doused the devastating fire. If they’d have arrived five minutes later, the fire would’ve been completely out of control, Berck estimated.

The rolling flames were so hot in the trailer that it “literally melted the interior deck out of the car,” Berck said.

While components, items and tires closest to the fire were damaged or destroyed, Berck said many things in the trailer's closed cabinets were afforded enough protection to be salvaged, including his helmet, power tools and even a six-pack of orange Sunkist the team later drank at the track.

In hindsight, Berck realizes the insurmountable task they faced from the outset. “If I had a garden hose in my hand when I got out” out of the truck for the first time, “I don’t think I could’ve (stopped) it,” he said.

While Berck talked on the phone Saturday morning, he stared out the window at the burned trailer that was later hauled back to his farm. In the race shop were supporters that came out of the woodwork to help prepare Kosiski’s backup car for action.

“It’s overwhelming, all the support,” Berck said. “People are offering trailers, cars. Some of my fiercest competitors are offering a car if I needed it. It’s really neat. Behind the scenes, we’re all so competitive,” but the offers to help pour in.

Thinking of how racers try to outrun each other, but then rush to a competitor’s aid in times of distress, Berck laughed. “It’s kind of like a dysfunctional family.”

Berck hopes to post another respectable finish at Junction Motor Speedway after making some changes to Kosiski’s Rocket Chassis, including refitting the seat. Because Kosiski is about 6-foot-2 and Berck barely 5-foot-8, he couldn’t even reach the accelerator initially without adding all kinds of stuffing to the seat.

Nebraska’s winningest Late Model driver over the past dozen years, Berck knows he doesn’t have anything to prove, but even with his disastrous start to the season, he’d like to take a run at his fifth straight title on the Malvern Bank Series, where he says “the competition level has really stepped up” in 2017.

Getting back on track will take more long hours of work, not only in preparing a new race car but working his 1,100-acre farm of corn, popcorn and soybeans. He’s running behind on planting during a rainy spring and faces that task before going to work on his race car and continuing the development and dealership of the Missile Race Cars he produces with the help of chassis builder Audie Swartz.

“If I don’t farm, I probably won’t be able to afford to race,” Berck said. “I was jammed up. Now I’m over-the-top jammed up. It’s life. We’ll get through it."