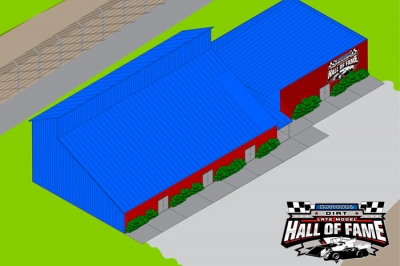 A mockup of plans for the new Hall of Fame building.

As the 2016 racing season comes to a close and the Dirt Late Model world starts looking ahead to 2017, the National Dirt Late Model Hall of Fame is hopeful that the coming year will be the one in which it is finally able to begin construction on a new building, with plans to remain at its current location at Florence Speedway in Union, Ky.

Established more than a decade ago, the NDLMHOF, has continued to outgrow its current space over the past several years, with its metal building filled wall-to-wall with memorabilia and other Dirt Late Model items. Plans for a new, larger building will allow space for offices, restrooms, a multi-purpose room and more.

“We built the building in 2001 and that building has hit mass capacity,” Hall of Fame president Gerald Newton said. “We’ve had a concrete slab beside that building forever. We just need a bigger building altogether … one that has suites on top, a multi-functional room, etc.

Founded in 2001 by former motorsports journalist Bill Holder, the NDLMHOF was originally designed as a means of preserving the sport’s history. With its memorabilia ranging from door panels to the full-sized cars of some of the sport’s biggest stars, the Hall of Fame museum is overflowing from its current space, so much so that some of its items are unable to be displayed regularly.

“We had a temporary building up there, sort of tent-type structure, and it lasted about three years and got blown down,” Holder said of the original structure that has been replaced by the current building. “Finally we just couldn’t even fix it anymore. Six of our race cars are out in storage in various places in the Florence area because we don’t have a place to put them. We do really need help.”

While the members of the Hall of Fame board have put together various fundraisers, including an auction that takes place at the North-South 100 each year, funding and donations for the new building have been slow to come by.

“The (National) Sprint Car Hall of Fame (in Knoxville, Iowa) has got unlimited money because they’re on a county fairground,” Holder said. “They get state money and grants and stuff. We have to collect through auctions and things like that and it’s very difficult. People are out of work and you just can’t get money, so that’s kind of a sad situation.”

But the Hall of Fame anticipates that it will be able to start construction on the new building in 2017.

“We really want to start it this year,” Newton said. “We’ve got quite a bit of money put away in a building fund. It’s just a matter of meeting with the architect and the builder and getting the actual layout of where it’s going to be sitting set in stone. Then we’ll go from there.”

Holder is hopeful that the new building will give Dirt Late Model fans a chance to see what others already have — that the museum preserves the sport’s history just as it was.

“Everything in there is the real thing,” Holder said. “A lot of museums, they’re very perfect. If somebody brings in a door that’s caved in, we’ll take it. That’s part of the sport. The inductees seem very impressed and happy. A lot of them are amazed that people really come to see this. We have a very good crowd when we have our induction ceremonies.”

While the Hall of Fame hopes to continue to grow and expand in the future, Newton stressed that none of this would be possible without Holder’s efforts.

Donate to the National Dirt Late Model Hall of Fame

The Hall of Fame has a page at gofundme.com/ndlmhof. Because it is a 501(c)(3) not-for-profit organization, any contributions are tax-deductible.