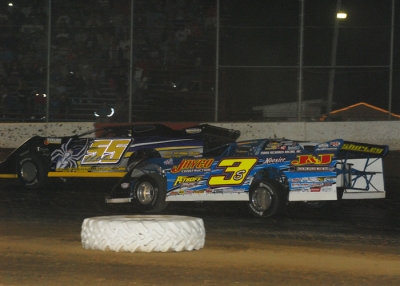 Van Wormer led by as much as a full straightaway and avoided the top-five position-swapping going on behind him on a track that allowing passing despite a narrow fast groove. Eighth-starting Brian Shirley worked his way into second place on the 16th lap and cut Van Wormer's straightaway lead to nothing by the midway point, but he couldn't find a way past.

Van Wormer got bottled up behind traffic with 11 laps remaining, but he lapped Jason Feger and then Terry English to gain a cushion on Shirley as well as Will Vaught and Dennis Erb Jr., who had made it a four-car breakaway in the second half of the race.

Shirley, the series points leader, settled for second with Vaught, Erb and Bull rounding out the top five.

The race was slowed by two cautions. Donny Walden spun in turn two on the eighth lap, and Dewayne Kiefer spun between turns one and two shortly after the first restart.

Derek Fisher and Brandon Sheppard grabbed C-Main victories to advance to the B-Main. The top two finishers from each transferred.

Polesitter Jeep Van Wormer cruised to an easy victory, taking the checkered flag several lengths in front of fourth-starting Brian Shirley. Shirley took the second spot from third-starting Wes Stiedinger in the early laps but never could track down the winner. Steidinger was third while sixth-starting Ryan Unzicker advanced two spots to finish fourth. Front-row starter Frank Heckenast Jr. was fifth. The heat's initial start was marred but a pileup in turns one and two when Steidinger went around, triggering an accident that also involved Jordan Bland, Kerry Mathew and Jim Moon. It took a few minutes to disconnect the cars of Moon and Mathew; both cars were towed off the track.

Overall fast qualifier Dennis Erb Jr. cruised to a heat race victory, beating fellow front-row starter Terry Casey by more than a half-straightaway. Casey, who fell to third behind Jason Feger early, regained the second spot and transferred to the feature along with Feger, who finished a few lengths in front of fourth-place finisher Terry English. The race ran caution-free.

Outside front-row starter Randy Korte repelled charges from fifth-starting Will Vaught (low groove) and fourth-starting Kevin Claycomb (high groove) to win the second heat. Vaught nearly got past Korte before an early caution, but Korte dropped lower on the track and maintained the top spot the rest of the way. Claycomb edged ahead of Vaught on the white-flag lap but ended up third. Polesitter Ryan Dauber was fourth. Jason McBride spun on the third lap to bring out the race's lone caution.

Third-starting Scott Bull got the jump at the outset, lost the lead briefly to a high-running Steve Sheppard Jr., then edged away the final two laps for a victory. Sheppard was second and polesitter Joe Harland got the third and final transfer spot but never contended up front. The race was slowed by an early caution when Richie Hedrick spun on the third lap after contact with Derek Fisher exiting turn four. Hedrick's left-rear tire was flattened and before pulling off the track, he registered his displeasure with Fisher by crinkling Fisher's rear quarterpanel. Tim Lance failed to start the race as flames came up from his engine compartment that required a dousing by track safety workers.

Dennis Erb Jr. of Carpentersville, Ill., was fastest among 43 qualifiers in the eighth leg of the UMP DIRTcar Summernationals at Vermilion County Speedway. Erb will start on the pole of the third heat race for tonight's $6,000-to-win event. Other heat race polesitters after group qualifying: Joe Harlan of El Paso, Ill., Ryan Dauber of Tonica, Ill., Jeep Van Wormer of Pinconning, Mich. The top three finishers in each heat advance to the 40-lap feature, while finishers 4-6 go to the B-Main. The others will go to the C-Main.

At least four drivers in the pits are coming off Saturday night victories: Jeep Van Wormer (Fairbury), Jason Feger (Kamp), Brian Diveley (Spoon River) and Tim Lance (Peoria). ... After running the Riggs Motorsports No. 81 since breaking an engine in the series opener, Terry English is back in his own No. 96. He's won two of four starts in the four-bar suspension Rayburn. ... Kevin Claycomb forgot his driver's suit, so he borrowed a backup from Illinois driver B.J. McCammon, It's not a bad fit. ... Among newcomers to the series at Danville: Richie Hedrick, Sam Epling, Cory Rolfe, Jayme Zidar, Justin Shaw and leading Lucas Oil Late Model Dirt Series rookie Terry Casey of New London, Wis, who ran several Summernationals events last season.