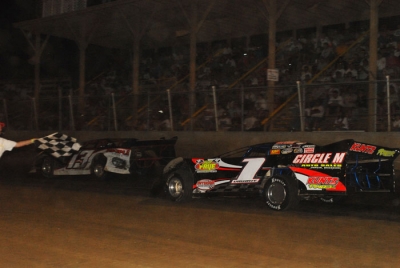 Will Vaught takes the checkered flag at Belleville. (erikgrigsbyphotos.com)

BELLEVILLE, Ill. (June 18) — Series rookie Will Vaught made some noise in a few early races on the UMP DIRTcar Summernationals tour. His biggest bang came in the fifth leg of the 26-race tour at tiny Belle-Clair Speedway as Vaught led all 40 laps to earn a career-high $6,000 payday. | Slideshow | Series recap and points | DirtonDirt.com Summernationals index

Vaught started outside the front row, got the jump on polesitter Brent Kreke and kept his black No. 1 GRT Race Car glued to the bottom to win the richest race in the history of fifth-mile Belle-Clair, which hosted the Summernationals for the first time.

“It feels good,” Vaught said after his first Summernationals victory. “We’ve worked our butts off the last few nights on this car. I think we’re applying what we’re learning every night.”

Kreke, of nearby O'Fallon, Ill., finished second for his best career Summernationals finish, surviving a few bumps from sixth-starting Wes Steidinger of Fairbury, Ill. Fourth was fifth-starting Michael Kloos of Trenton, Ill., part of the top four that pulled far away from the rest of the field. Summernationals points leader Brian Shirley of Chatham, Ill., overtook Jason Feger with just over two laps to go to grab the fifth spot.

Vaught edged away from the outset and was firmly in control when the first caution appeared on the 14th lap for third-running Rodney Melvin, who slowed with a flat left-rear tire. While the yellow erased Vaught's straightaway advantage, it gave him clear racetrack and he pulled away again from Kreke before a lap-20 caution for Dave Thornton's turn-three spin.

On the restart, Vaught again led the low-groove parade and pulled away from Kreke, who was hotly pursued by Steidinger. Steidinger climbed Kreke's left-rear tire twice, first on the 21st lap in turn three, then again more severely on lap 25 in turn one. Kreke's quarterpanel was dented in, but his tire showed no harm as he continued with Steidinger and Kloos close behind.

Vaught built another straightaway lead with 10 laps remaining, but lapped traffic — also in the low groove — forced Vaught to slow his leading pace. Soon enough Kreke, Steidinger and Kloos were stacked up behind Vaught, who was hampered by the slower car of provisional starter Dewayne Kiefer. With fellow driver Mark Voigt signalling him from the infield to stay on the bottom, Vaught didn't dare try to go around Kiefer and held on for the victory.

The 21-year-old Vaught is new to the Summernationals, but the protege of former Summernationals star Bill Frye of Greenbrier, Ark., has been among southwest Missouri's up-and-coming drivers the past five seasons. He won two series events last season on UMP's sister series, the MARS DIRTcar tour, and finished third in series points. On his first Summernationals tour, he's finished third or better in three of five events and is among the early title contenders for the series scheduled to visit 26 tracks in 31 days.

Polesitter Darren Miller led a two-car breakaway and won the B-Main over Dennis Erb Jr. Things got a little dicey for the leaders on the final lap when Miller had to slow for Jordan Bland, who was pulling into the infield between turns three and four, and then when third-starting Ryan Unzicker slowed on the frontstretch and caused the on-track flagger to retreat from his usual position. Behind Miller and Erb, Rick Standridge ran a steady third to transfer to the feature along with track points leader Mike Hammerle, Tim Lance and Dave Thornton. Kevin Weaver was the seventh driver and failed to make the feature for the second straight night. Terry English, last night's series winner at Highland, also missed the main event.

Patrick Sheltra started outside the front row and raced to victory. He advanced to the B-Main along with Brian Heizer, Mark Voigt and Mike Schulte. The worst of several cautions came on the second lap when Schulte turned polesitter Vince Grondzki in turn one, triggering a pileup that included nearly half the 16-car field.

Fourth-starting Rodney Melvin's last-lap move in the low groove overcame high-running Brian Shirley for a victory in the final heat. Shirley, the series points leader, battled low-running polesitter Jeep Van Wormer through the first half of the race before pulling ahead. Van Wormer eventually moved high and he clinched the third and final transfer spot. Far behind was Dennis Erb Jr., who had his hands full with track points leader Mike Hammerle. Melvin also won a heat last night at Highland but driving his No. 27 instead of the No. 59 he's piloting at Belle-Clair. Terry English, Highland's feature winner, never got in the mix for a transfer spot.

Restored to the second spot after a turn-one tangle with Steve Sheppard Jr., fourth-starting Will Vaught ran a tight low groove to win the third heat over a high-running Ed Dixon, who led the first half of the race. Mark Faust nearly caught Dixon at the checkers to finish in the third and final transfer spot over a distant Ryan Unzicker. The polesitting Sheppard ran up front early, but Vaught squeezed underneath. On the next lap, the cars came together in turn one, and officials charged Sheppard with the caution after both spun. Sheppard and Vaught also battled — on and off the track — in a June 1 event at Macon, Ill.

After following polesitter Wes Steidinger all race long, fellow front-row starter made his winning pass heading for the checkered flag to win the second heat. Steidinger settled for second with Randy Korte getting the third and final transfer spot in the wreckless event. Kreke rebounded from breaking an engine in Tuesday's time trials at Highland (Ill.) Speedway.

Sixth-starting Jason Feger proved the wall-scraping high side could work as he swept past polesitter Brian Diveley at the halfway point and won the 10-lap first heat. Diveley fell to third behind Michael Kloos in the closing laps while Darren Miller's high-side attempt to grab third on the last lap failed in the caution-free prelim.

After struggles with wrecks and mechanical problems early in the UMP DIRTcar Summernationals, Brian Diveley of Springfield, Ill., turned it around at least briefly at Belle-Clair Speedway by setting fast time among 41 cars. Diveley turned a lap on the fifth-mile oval of 12.781 seconds and will start on the pole of the first heat. Other heat polesitters: Wes Steidinger of Fairbury, Ill., Steve Sheppard Jr. of New Berlin, Ill., and Jeep Van Wormer of Pinconning, Mich. The top three finishers from each of four heat races will transfer to the feature, with finishers 4-6 in heat going to the B-Main. Everyone else will run a C-Main.

It was announced just before hot laps that Saturday's Summernationals event at I-55 Raceway in Pevely, Mo., has been cancelled because the road leading to the track is flooded. That will give drivers a day off before Sunday's event at Vermilion County Speedway in Danville, Ill. ... Among newcomers to the series at Belle-Clair is track regular Ed Dixon of Washington, Mo., a five-time Summernationals winner. Dixon's last series victory came in 2002 at Peoria (Ill.) Speedway.