By Alli Collis and Kevin Kovac 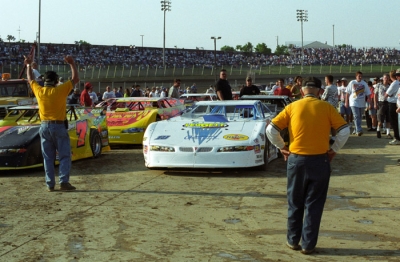 Earl Baltes looks over cars in the infield. (rickschwalliephotos.com)

When Earl Baltes built Eldora Speedway in 1954, he had a dream. And 17 years later, that vision became a reality as the racetrack hosted the inaugural World 100. Over time, Eldora has continued to grow and flourish as the home of some of dirt racing’s biggest events, including the Dirt Late Model Dream and Kings Royal. | More on Earl Baltes

Each year, drivers and fans return to the Ohio oval for a single reason — there is no other place like it. No doubt, when Baltes built Eldora more than 60 years ago, he created something special. Its atmosphere both indescribable and unparalleled, Eldora will always remain a favorite among the racing community, perhaps even more so with Monday's death of Baltes. To put it simply, it’s a magical place.

“As long as I live, I’ll never forget him,” three-time World 100 winner Jeff Purvis of Clarksville, Tenn., said of the late Eldora founder. “When you pulled up and saw Earl, it was almost like a fairy tale.”

Capturing his most recent World 100 victory last season and first in 1988, Scott Bloomquist of Mooresburg, Tenn., has been attending events at the 1/2-mile oval for many years. For the Hall of Famer, no other racetrack is comparable.

“From the first time we went there, it’s just a place like no other,” Bloomquist said. “I’ve always stated that you’ve never really seen a dirt race until you’ve been there. The crowd, the energy, the racetrack itself, the history … that first one, I got to hear the story and everybody thought he was nuts when he put up that kind of money. He told me all about it. He had a vision.

“That last World 100 (in 2014), I would’ve never dreamed that would be the last one that (long-time Bloomquist sponsor) Bob Miller and Earl Baltes would get to see. I hope they’re both up there talking about it right now.”

Eldora Million and four-time World 100 winner Donnie Moran of Dresden, Ohio, remembered Baltes as the “best promoter of all times.” His vision for Eldora set the framework for what Dirt Late Model racing has become, shaping the lives of those who followed him.

“His dream of the racetrack and the type of facility that he had and the starting of the World 100 as the biggest race for Late Models, and then what he did for sprint cars with the big races …there’s nobody else who did that,” Moran said. "To me, it seemed like he had more of a far dream of where he wanted to take racing than anybody else did from a promoter’s standpoint.

“He meant a lot of things to a lot of people. He changed so many people’s lives in racing because of Eldora Speedway, I don’t know if anybody will ever be able to duplicate that.”

Despite the sports other major races paying bigger purses, Eldora’s World 100 continues to be Dirt Late Model racing’s most prestigious event, designed by Baltes to pay $1,000 more to the winner each year.

“The World 100 will always be the granddaddy, the one that started it all,” former race winner Steve Francis of Ashland, Ky., said. “It always will be. There’s not a doubt about that. I’m one of the fortunate ones to have my name on that trophy. It’s just a neat place, the whole atmosphere that place has — it’s second to none.”

Among regulars at Eldora, 2005 Dream winner Matt Miller of Waterville, Ohio, reflected on the significance of success at the racetrack known as the “Big E.” Winning a race there was no easy task, and Baltes always made sure fans saw a good show.

“Being from Ohio, there isn’t a bigger influence,” Miller said. “When I was starting to race, Eldora was the track that everything kind of centered around, and really today it still does. For me personally, it’s kind of put me in the spotlight when I was younger and trying to make a name in the sport. Winning races there does more for your career than anywhere else.

“When I first started, back in the early ‘90s, he was hands-on everything. You showed up there, you knew he was around. I’ve never seen somebody who worked a racetrack harder than him. You went to a big race, in the middle of the night when you went to bed and when you got up early in the morning, he was still out there working on the racetrack.”

Former UMP Fall Nationals winner Jeep Van Wormer of Pinconning, Mich., counts Eldora as one of his favorite racetracks. Just there is no other place quite like Eldora, there is no promoter quite like Earl Baltes.

“Earl’s probably the greatest promoter I’ve ever seen,” Van Wormer said. “He went out there taking chances on races and he pulled it off. I’m glad that I got to race with him and race at the track that he prepared. There’s so many people that will never get to meet him from this point on, and he’s a legend for sure.

“I love Eldora. That’s the track that I enjoy the most, and it’s because of what he created there. Just the atmosphere. You get there and it’s a different atmosphere than any other racetrack we go to.”

Though Baltes sold Eldora to NASCAR driver Tony Stewart in 2004, business has continued as usual at the Ohio oval, with crowds packing the stands at all major events.

“And the good thing is, when he sold the track, he sold it to Tony,” Rocket Chassis co-founder and long-time team owner Mark Richards said. “And Tony loves racing, and even though there’s a few things that have changed, it’s still Eldora. Other people could have got ahold of the place and probably not respected it as much as Tony has. Tony’s done a great job of not taking away, or destroying, that World 100 weekend or Dream weekend or the Kings Royal — any of the big weekends that track is noted for. Tony kept those races intact, and if anything, they’re as successful today as they’ve ever been

“It’s still Eldora … and Tony has never really stepped up to say, ‘Hey, this is me.’ He’s kept it looking like it’s still Earl’s. Tony hasn’t tried to take that away. If it would’ve been taken over by somebody else who had some kind of ego or agenda, we may not have Eldora the way it is right now.”

“I love Eldora. That’s the track that I enjoy the most, and it’s because of what he created there. Just the atmosphere. You get there and it’s a different atmosphere than any other racetrack we go to.”