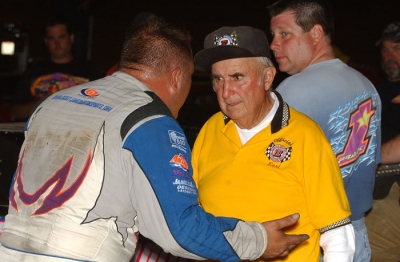 Scott James appeals to Earl Baltes at the 2004 World 100. (rickschwalliephotos.com)

At Eldora Speedway, drivers played by the rules of Earl Baltes, or they didn’t play at all. That’s what many drivers remember about the legendary track founder who died Monday at age 93.

A few remember Baltes mellowing in his later years, but plenty of others recall facing his wrath at a track with a reputation for making drivers toe the line whether they were a local driver 10 miles away or a superstar journeying 500 miles to the track carved out of a Rossburg, Ohio, cornfield. | More on Earl Baltes

While Baltes often quipped with a twinkle in his eye, wearing his flipped-bill cap slightly askew, he was all business in running American’s best-known dirt track, making a lasting impression on young drivers.

Ohio driver Donnie Moran, who would go on to win the Eldora Million among his major-race victories at Eldora, learned as a teenager not to cross Baltes or his track crew. A team had position a car incorrectly near Moran’s pit area, and Baltes straightened them out.

“Earl saw that and raised holy heck with them,” Moran recalled. “That was the first impression I got when I saw him as a kid there to race, and I was like, Holy cow, you don’t want to make this guy mad!”

Steve Francis of Ashland, Ky., a frequent competitor at Eldora for more than 25 years and former World 100 winner, recalled his first contact with Baltes, too.

“I was there in ‘80s with (Hall of Fame driver Charlie) Swartz when he won it, and the first memories I have of Earl are him being this kind of guy who ran the show with an iron fist, so to speak. He was a guy who in charge of what was going on there, in every aspect. You knew that immediately. If he told you to load up and leave, then you were loading up and leaving. It didn’t matter if you were Charlie Swartz or Billy Moyer or Scott Bloomquist or the guy who ran there every Saturday night. If you done something to make Earl mad, you were leaving.

“The first driver’s meeting I was ever at there, Earl got up there after whoever was doing the meeting was done, and he said, ‘Now boys, if you guys fight in the pit area, it’s a $500 fine and you’re barred. But if you guys fight on the racetrack, it’s a $500 bonus.’ That was kind of the best description of Earl Baltes — he always had some kind of comment to make at the drivers’ meeting that would let you know he was dead serious about everything, but make you laugh at the same time.”

Most drivers and teams learned the best way to stay out of trouble was to follow track rules to the letter at Eldora, which Baltes operated from 1954-2004.

“You had to go by his rules, and if you didn’t, you was out of there. That’s the way every promoter ought to be,” said Hall of Fame driver Freddy Smith, a two-time Dream winner. “I never had no run-ins with in. I always tried to do what he wanted you to do because I seen what he did with other guys. One time there was this guy working on his car in the parking lot right where you go in the main gate, and Earl come by and told him, ‘What are you doing working on your car here at the gate? When I come back through here, I want that car gone. If it ain’t gone, I’m gonna take the dozer and push it out.’

“This guy, well, he got in a real hurry … he got that dang thing loaded up and moved out from where he was at. Earl was always real serious. If he told you something, he was gonna do it.”

Chub Frank, whose World 100 victory in 2004 was the last one under Baltes before he sold the track to NASCAR driver Tony Stewart, kept track of what he should and shouldn’t be doing.

“What I remember from back when we first went there was how he controlled everything, from how fast you were on your four-wheeler. It was something. I think it was the year we won the World 100, he put a rule in that you weren’t allowed to swerve and heat your tires up on the racetrack,” Frank said. “He was a different bird when it came to how things worked, but that’s the way I like it. That’s the way it should be done. I’m not so sure that’s the way any place is anymore.

Baltes earned the respect of Frank and other competitors.

“That’s one thing about Earl: it was his way or the highway. But I had a lot of respect for that. I had to problem with that. You knew what you had when you got there and you knew you didn’t have to worry about somebody getting the favoritism that you still see once in a while at some other tracks,” Frank said. “Earl and I never had any issues. Never got thrown out, never really scolded — well, maybe except for riding the four-wheeler a little too fast.”

“What I always admired about him, he ran that place like Sgt. Carter, I always say,” Moyer said. “He threw me out once when we went up there way back in the day. When I didn’t have reverse in my car, back before we had rules on a lot of that stuff. Really, at the end of the day, I was really in the right, because the rules, I wanted to run the rules and done the right thing. We was just ahead of everybody, but it was his way or the highway — so I hit the highway, I guess.”

Jerry Bowersock of Wapakoneta, Ohio, has turned thousands of laps at Eldora in many divisions, including four Late Model starts in the World 100. He got a few tongue-lashings from Baltes over the years.

“Racing there from the time I was 18, he was pretty stern in how he enforced rules, but he treated everybody fair. It didn’t matter if you were Scott Bloomquist or me, you got the same respect and got treated the same. It was a pleasure to be around the guy. He was quite a character,” Bowersock said. “You had to take the good with the bad. If you were on his bad side, he’d be mad at you for a while. But if you won a race and done something good, he was the first to congratulate you.”

Former Dream winner Jimmy Mars of Menomonie, Wis., knew Baltes as a nice man, “but if you got his temper going just a little bit he could turn hard-nosed in a hurry. I think everybody respected him just because of that.”

“I never had a run-in with him. I always made sure that I didn’t have a run-in with him. He was always very nice to me, but at the same time, you always had it in the back of your mind that you didn’t want to go and do anything that would piss him off. He didn’t care who you were — he’d send you home in a hurry if you did something wrong. I think that’s why everybody respected him so much. Whether you’re a person who just showed up the first time just to be there or a seasoned veteran, he’d treat everybody the same.”

Mark Richards, co-founder of Rocket Chassis and a long-time team owner who has competed at Eldora, once found himself summoned to see Baltes after what seemed like an innocent incident in Eldora's infield pits.

After pit stewards helped Richards park his hauler, he noticed the trailer was a bit crooked and jutting out on the concrete pad — the area used to line up the starting grids for races — so he jumped back in the truck to remedy the issues. Suddenly, track security was on the scene.

“They said, ‘Who moved this truck?’ I said, ‘I moved it to get the tail of it off the concrete.’ They said, ‘Well, you gotta come with me. You may not be racing here this weekend.’ I’m like, ‘OK,’ so we walk across the track and up through the grandstands to the tower, and there’s Earl, sitting on a chair in the scorer’s booth where he’s looking over everything,” Richards recalled.

“He said, ‘Who moved that truck?’ I said, ‘I moved it.’ He said, ‘Well, why did you move it?’ I said, ‘Because the back end of it was out in the road, Earl, and I knew you’d come by there with the water truck and I knew that could be a problem.’

“I felt like I was on trial, and that’s what it looked like — here he is, sitting in his chair, asking me questions and looking me over. Then he said again, ‘Why did you move?’ So I told him again, ‘Because I knew you couldn’t have nothing touching the concrete.’ So he says, ‘Nobody moves a truck here unless I OK it.’ I said, ‘OK, I’m sorry I moved the truck. I don’t want to have any trouble.’ Then he says, ‘I’m glad you moved it, but you’re lucky I’m letting you race.’ And that was the end of it. Out of there I went, and basically it was clear that he was in charge of everything — your property and his as soon as you pulled on his grounds.”

Despite the incident, Richards knows Baltes was operating a special racetrack with his methods.

“I think there’s been a lot of promoters who have tried to duplicate a lot of Earl’s philosophy or Earl’s way of running a racetrack, but truthfully he’s the only one who’s been that successful at it. You knew when you went there you were at Earl’s Place. It was like, there was a different law at Earl’s Place and he was sheriff,” he said. “He was a really, really down-to-earth promoter that didn’t care who you were. He didn’t take no crap from nobody.

Francis agreed that’s among the things that set Baltes apart from the legions of track owners at dirt tracks across the country who couldn’t match his promoting success.

“When you left the drivers’ meeting at Eldora, you knew who was in control of the show in every aspect,” Francis said. “If you done something to make him mad, if you went here when he told you to go there, you was gonna leave. It didn’t matter who it was. You knew how you were gonna be treated. There was no special privileges and no manipulation of anything.”

“That’s one thing about Earl: it was his way or the highway. But I had a lot of respect for that. I had to problem with that. You knew what you had when you got there and you knew you didn’t have to worry about somebody getting the favoritism that you still see once in a while at some other tracks.”