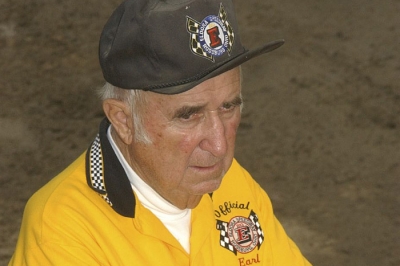 Monday’s death of Earl Baltes send the Twitter world on its ear for a few hours with hundreds of race fans showing and outpouring of love for the legendary Eldora promoter. Some of the best (more on Baltes):

@roushyatesparts It is with great sadness that we say good-bye to a legend in Earl Baltes, former owner of @eldoraspeedway. You will be missed by all.

@colemccubbin @TonyStewart Earl Baltes Memorial needs to happen! First year, $1 million. Then $50,000 from there out. There would be 400 cars there.

@DaveArgabright Great idea @RogerSlack - Dinner tonight will be a Budweiser and a hot dog in honor of Earl Baltes. He would love it

@TylerReddick Hate to hear about the passing of Earl Baltes. He did so much for the dirt racing community. We will never forget what he has done.God speed

@ChrisDolack Earl Baltes is bigger than 140 characters so I'll just say he was a great man and will be missed, glad I had a chance to talk with him.

@JasonBritton15 Hate to hear about the passing of Earl Baltes. Never met the man but certainly knew his legacy. Definitely an #Innovator #EarlBaltes

@JeffGordonWeb Just heard the sad news of the passing of Earl Baltes. His contribution to dirt track racing will forever be remembered. Thank you Earl!

@ChrisWilke11 As a promoter I always reminded myself that Earl Baltes could get 1000's of fans to a track in the middle of nowhere. Nothing was impossible

@AshleyStremme One of the greatest men in the dirt track world has passed. Earl Baltes, you were an innovator that was ahead of the times. #EldoraSpeedway

@RyanDavisR2 RIP to the godfather of Eldora Earl Baltes, a true pioneer in track owning and promoting the sport we love.

@BradSweet49 Just read we lost the Eldora legend Earl Baltes. I was fortunate enough to meet him after my kings royal win he was a neat man RIP

@RossWece Turn them hat bills up today, folks. There'll never be another quite like Earl Baltes.

@Kenny_Wallace Sorry to hear of the Original Owner of @EldoraSpeedway "Earl Baltes" passing, The first promoter in American history to pay 1 Million to WIN

@rooroo12 RIP Earl Baltes, there will never a better promoter or racetrack than what you put out there. You helped create many of my best memories.

@devinmoran99 A very sad day for the whole racing community, thanks Earl for everything you've done for my dad and all of racing!

@seannanderson Arrived to work and saw Earl Baltes passed away. In the world of dirt racing, Earl stood taller than most. #legend @EldoraSpeedway

@jskotnicki Very sad hearing the passing of Earl Baltes, one of the true pioneers of short track racing. A "Dream", a ballroom and a 1/2-mile.

@Ernernst Tears in my eyes as i hear that Earl Baltes died. The man built my favorite place in the world (Eldora). RIP Earl and Thank You.

@mikevleone The fact that Earl Baltes has been trending all day shows the impact he had in racing. Interesting though Earl did it all w/out social media

@ClintBowyer Sad to hear of the passing of Earl Baltes. Worked hard, took chances, absolutely no ----, and built the best dirt track EVER! @EldoraSpeedway