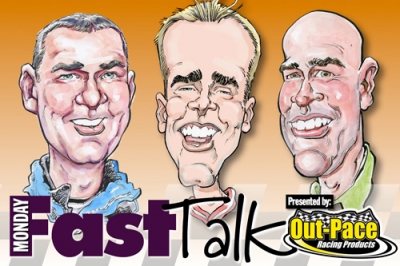 Todd Turner: Hearts are heavy in Dirt Late Model racing today with news that legendary Eldora Speedway founder Earl Baltes passed away this morning. While the Ohio track has been in the capable hands of owner Tony Stewart the last 11 years, things won’t ever be quite the same at the Big E again, will they?

Michael Rigsby: No. And I'm not sure that anything more than that two-letter response is required. Obviously Tony, Roger, and everyone at Eldora do a tremendous job there, but Earl was Eldora. You've seen no doubt the outpouring of response today in the racing world and on social media (The name Earl Baltes even trending on Twitter). It's just a man that cannot be replaced. He may not have been running Eldora any more, but his spirit, and his sheer presence in that press box carried a ton of weight. I had a lot of personal interactions with him over the years, and my heart is heavy today. He will forever be an icon, and Dirt Late Model racing will never quite be the same.

TT: This is one of those times were you don't worry about tossing around words like "legend" and "icon" ... his accomplishments and contributions to short-track racing really can't be exaggerated. Eldora was a special place because Earl created it ... but also because when Earl was there, it made it all the more special to the throngs that loved him.

Kevin Kovac: It certainly is a sad day for Dirt Late Model racing specifically and motorsports in general. Like you said, Todd, Tony Stewart might have purchased Eldora from Earl Baltes back in 2004, but everyone – including Stewart, I'm sure — still considered it Earl's track. Even though Earl was no longer prowling the pit area for the past decade, there was sort of a comfortable feeling knowing that every time you went to a race there, sitting up in the lower tower watching all the action would be Earl and his wife Berneice. It was like he was giving his stamp of approval for everything going on simply by being there, so how can a race at Eldora ever be the same?

TT: Obviously we’re planning tons of coverage in tribute to one of the most influential figures in our sport — and in auto racing overall — but let’s kick if off here while we’re putting all the interviews together. Here’s a crazy consideration: If Earl Baltes would’ve stuck with operating the Eldora Ballroom and never built the most famous dirt track, what would the sport’s landscape look like now? What would we be missing?

I don't think it can be overstated that if he and his family don't go out on a limb, and put major Dirt Late Model racing on the map, things are wildly different. Many drivers have told me today "I wouldn't be racing for money today if he hadn't started the World 100 so many years ago. This is an icon. Someone we simply can't pay enough respect to.

KK: Man, that's a thought that I would rather not imagine. I mean, no matter what you think about Eldora Speedway, there is no doubt that it is the most famous dirt track in the country. I've often noted how going to a race at Eldora just feels different, feels special — from that first glimpse you get of that high-banked track sunken into the ground to the electricity that permeates through the air. You don't just replicate that anywhere, and it's given dirt-track racing huge events that the sport can hang its hat on. I still get excited every time I go to Eldora for the World 100 or the Dream, and if you don't ... well, get yourself checked out.

TT: Just taking the World 100 alone, can you imagine our sport not having that institution? It's really the event by which all others are measured, and while drivers might have favorite tracks and big money might be on the line across the country, a driver isn't considered one of the very best until he's holding up a globe trophy. It's still the pinnacle.

MR: People always call me a World 100 homer … and for good reason. Because I am. It is like you said Todd, the event which all other events are measured by. And for good reason. I thought Tony nailed it on the head with his release when he said Earl didn’t do it with TV money, big sponsors, a fair board or anything. It was only the Baltes family and a dream. Think about that. That's staggering really. He put his neck on the line with that first World 100, and changed our sport forever. That one idea made everything that followed possible.

TT: Beyond his contributions to racing, one thing that always struck me is how beloved Earl was among fans. He was like a rock star when spectators spotted his flipped-up cap bill, gathering around to pose for a photo. There aren't many personalities like that in the promoting world, is there?

MR: Honestly he might be the only one. In a sport where the stars are almost always the drivers, he was the only non-competitor who really captured our imaginations and was beloved everywhere he went. When he walked through the grandstands at Eldora, people simply stopped. He was that kind of figure. Still hard to believe that he's gone.

KK: I was talking with Steve Francis about this very topic during an interview earlier today. Just consider this: fans want to get a picture taken with a promoter! These days the main thing fans want to do to a promoter is rip them up on the Internet or whatever, but Earl, while being tough as nails with his competitors, just had that down-home look and feel to him that endeared him to the fans.

He wasn't buttoned-up or stiff ... he seemed real to everybody watching the races, and every time he cracked a joke to a fan he became even more popular. I will never forget how fans would knock on the tower window and wave to Earl all night long, and he'd satisfy them with a little wave back and a twinkle in his eye.

TT: Will there ever be another Earl Baltes?

MR: No. Never. Not even close.

KK: I really can't imagine it. There will be other great promoters in the future, but no one can spin together all the qualities that Earl had. He wasn't a legend for nothing.

TT: Let’s wrap up with a few questions about action on the track, as the weather relented enough for the busiest weekend of the season. Jonathan Davenport (at Ohio’s Atomic Speedway) and Earl Pearson Jr. (at Indiana’s Brownstown Speedway) opened the post-Speedweeks Lucas Oil Late Model Dirt Series season with victories, and Davenport’s position atop the series points (with Pearson second) has him considering a full-season run on the Lucas Oil Series.

Kevin wrote about that in a story appearing earlier today at DirtonDirt.com. What do you all think of the tour potentially adding Davenport? And the likelihood that he’ll be in close enough contention at his Show-Me 100 evaluation date to tackle the full schedule?

MR: J.D. is one of those “free agents," if you will, that any tour would love to have. He's a guy that typically runs an independent schedule that you look at and go, “Oh man he'd be a huge addition". Not only because he's a good driver, but because the style in which he drives. To. The. Wall. I think he'll definitely be in the mix until the Show-Me and then have a decision to make after that.

KK: What a pickup Davenport would be for the Lucas Oil Series. With his great talent — he's a proven winner and seemingly drives a car as hard as a car can be driven — I would rate him right at the top of the list of, as Michael says, free agents not affiliated with a national tour. What is so interesting is that there wasn't really any public talk before the season started of Davenport possibly following the series, so all the Lucas Oil attention was focused on the usual O'Neal-Owens-Bloomquist trio. He certainly has the goods to shake things up on that circuit in a big way.

TT: Anything else jump out at you over the weekend? Tony Jackson Jr. winning the MARS opener? Chris Ferguson taking the Carolina Clash opener? Randy Weaver’s victory at Boyd’s in a race where Dale McDowell spun trying to regain the lead? The array of Longhorn Chassis drivers in victory lane? Or something else?

MR: Yeah the Longhorn thing popped to me right away. They're definitely gaining some traction, and it was hard not to notice that. Good for Fergy getting a win in a race that I know means a lot to him, and Randy Weaver, I predict, is on his way to having a sneaky good season again. Which reminds me Top 25 voters ... don't overlook those regional guys!

TT: I’ll give a shout out to Ronnie Johnson coming from 23rd to win the Chevy Series race at 411 Motor Speedway. There's nothing more satisfying than a winner rallying from deep in the field.

KK: You have to feel good for Ferguson, who just last month was so down in the dumps when motor trouble forced him to depart Golden Isles Speedway after he flashed some serious speed at the start of the Lucas Oil Series opener. His victory was a great comeback and proved that he's carrying over the strides he made last year.

And Weaver really seems to be locked in. He enjoyed a great season in 2014 despite racing while his father battled cancer; with his father now in a better place after passing, Weaver said he's more focused than ever to win races in his dad's memory. He looks to be doing just that.