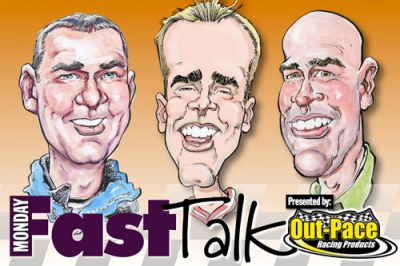 Todd Turner: First, we welcome Kevin Kovac as a staff member today. Readers will be seeing the former World of Outlaws publicist here at Fast Talk and elsewhere on the website, primarily through his reporting and feature stories.

It wasn’t an easy one for Madden as he rubbed past Jonathan Davenport to take the lead, then saw hometown upstart Terrance Nowell take command before fuel pickup problems forced Nowell out with 20 laps remaining. Madden kept Davenport in check down the stretch for the victory. Along with his Lucas Oil victory last month at Georgia’s Golden Isles Speedway, Madden has two victories by March 1 for the first time in his career. Is a career-best season in the works?

Michael Rigsby: It looks that way, and what I find even more interesting is that, in a year where some guys are looking away from Bloomquist Race Cars, Chris Madden is rolling along better than ever in his car. It's no secret that out of everyone in the Team Zero camp, Madden is one of Bloomquist's closest friends-drivers, so it's not shocking that he's sticking with Scott, and like you said, appearing to be ready for a breakout year. The wins have come at places he's really good, so let's see what happens. But no doubt, Madden is on point.

TT: Speaking of the Madden-Bloomquist relationship, contributing photographer Marty Bingham had a tremendous photo of the two leaning in close to talk this weekend in the East Alabama pits.

MR: Yeah, it's obvious that's a tight fraternity between the two.

Kevin Kovac: Madden certainly looks primed for a big year. And I have no doubt that he's capable of putting together a career season — I've always thought that Madden might be the best driver out there who's never run a full season on a national tour. He just has never quite had the program, the proper backing, to truly showcase his talents all across the country. If he can keep his deal purring this year — and as he'll admit, that's always a challenge for him — then I would expect his success to continue.

TT: On Sunday at South Carolina’s Cherokee Speedway, Jonathan Davenport earned $10,000 at March Madness XXII as he, too, continues a strong start to the season that includes a Golden Isles victory opening Georgia-Florida Speedweeks. He’s clearly taking a liking to his new Longhorn Chassis in his second stint with Lee Roy and Kevin Rumley. Will we see in 2014 the same Jonathan Davenport who excelled as the Barry Wright house car driver a few years back?

MR: When Davenport is good, he has that raw aggressiveness and explosiveness that you just notice. You say, “Whoa, J.D. looks fast!” and he's had that so far this year. If he carries it through, it'll be a vintage Davenport season.

KK: So far Davenport seems like he's found that comfort zone he had with Barry Wright, and that bodes well for his prospects. Of course, he got off to a pretty strong start last year as well and didn't carry it through the full season — and this year he's planning to travel more with the NDRL tour, so he'll be hitting tracks away from his native Southeast. It'll be interesting to see how his season plays out.

TT: Despite Davenport’s NDRL plans (he also chased Lucas Oil points with Clint Bowyer Racing in 2012), he and Madden — besides being rivals who have competed at many of the same tracks in recent seasons — fit that mold of drivers slightly outside the mainstream of national touring regulars, as Kevin previously mentioned.

They often race selectively, can free up time for the two-week Schaeffer Oil Southern Nationals at mid-summer, typically run Eldora’s biggest races and hit the richest races at their favorite home tracks. There aren’t a lot of top-notch drivers who can pull it off, but Jimmy Mars and Brian Birkhofer are among others who have shown it can be an attractive way to compete. Is that style always advantageous?

MR: You hear two pretty distinct arguments when it comes to this. The guys that feel the structure and consistent racing of a points battle makes them better, and those that feel focusing mainly on bigger events and racing "when they want" keeps them sharper in the long-run. Both sides have shown to work the past decade. Madden and Davenport certainly fall into that category, as do Birky, Mars, and in the past, Billy Moyer. It can go either way, but for J.D. the "pick and pop" seems to be better.

TT: I guess most obviously, the drivers who pass on following a national tour can't look forward to a postseason points payout, and that can sometimes be a big boost heading to the off-season. On the other hand, they're not beating the highways for faraway races they absolutely must attend. Instead the run a personal schedule that can be tailored better to geography and other concerns. You can argue it both ways.

KK: It’s a great plan — if you're running well, that is. A driver absolutely must run up front consistently — I'm talking plenty of top-three finishes, with at least one or two high-dollar victories included — to make it really work. If a guy starts struggling, there's no insurance, i.e., guaranteed travel money afforded a regular on a national series, to help them along. Pick-and-choosers can't go to any race guaranteed that they'll make a certain amount of money. If they don't qualify, there's no provisional and tow money to help sooth the wound. They have to be on top of their game.

TT: Speaking of Birkhofer, he’s perhaps the biggest-name driver who hasn’t competed this season, and there’s interest in his 2014 racing with a switch to Rocket Chassis. Any other drivers who haven’t competed that you’re eager to see?

MR: I think there's a group of Midwestern drivers that haven't rolled out yet that everyone is excited to see in Brian Birkhofer, Shannon Babb and Jason Feger. All guys who have taken cracks at Speedweeks in recent years but chose to save the money and sit it out this year. Babb also making the switch to Rocket, while Feger is looking to capitalize on a good season last year too.

KK: I’m interested in seeing Shannon Babb hit the track. He has some new Rocket cars this year, and it sure would be great for the sport if the move would help him return to his mid-2000s form — you know, that stretch when every time Shannon Babb pulled into a pit area, pretty much no matter what the track, everyone there was wondering how in the heck he could possibly be defeated. He’s had his moments since then, like his relentless drive to victory in last year’s Prairie Dirt Classic at Fairbury American Legion Speedway, but there haven’t been enough of them. Every fan should want to see a Shannon Babb consistently performing at the top of his game, and perhaps we'll see that this year.

MR: I like Kevin already ... we're already agreeing on everything!

KK: Getting on the same reporter's wavelength as you, Michael.

TT: Dirt racing isn’t always wise to follow NASCAR’s lead — straightup starts based on time trials comes to mind — but stock racing’s biggest organization switched up its playoff format in the off-season with radical changes that emphasize winning while winnowing the title contenders to four by the final race.

The Carolina Clash adopted a chase-style system, but Dirt Late Model’s national tours have stuck with the standard season-long points chases, seemingly without complaint. Do you ever see the national tours exploring differing options to determine a champion?

MR: I've never been a big fan of the playoff-style deal. It just doesn't fit in my opinion. And while in NASCAR (in the old format) the chases would long be decided, that's not the case in Dirt Late Model racing. Who can forget Rick Eckert's dramatic World Finals win two years ago? How about "What time does the bus leave for K-C?" from James Essex as a Lucas Oil points-leading Scott Bloomquist explodes a motor at Rome? Our sport typically goes down to the wire anyways, so who needs a playoff chase?

KK: I hope the powers-that-be of Dirt Late Model racing’s national tours never give a fleeting thought to the rejiggered playoff format that NASCAR has instituted for 2014. Call me old-fashioned, but a motorsports champion is supposed to the driver who has performed the best for an entire season. That concoction NASCAR will use to crown a Sprint Cup titlist this year is just the latest sign of a series that is desperate to generate some sort of interest and excitement. Stay away from that contrived stuff, Dirt Late Model tours. Crown a real champion.

TT: Before we sign off, let’s briefly look ahead to NDRL’s Tennessee Tipoff Classic coming up this weekend at Smoky Mountain Speedway in Maryville. That’s a track where local drivers and those who race there frequently tend to match up well against invading drivers. Give fans a few things to look for this weekend.

MR: I think first off you'll probably see fans in east Tennessee itchy to race after a winter that seems miserable and never-ending. Smoky Mountain to me is one of those crossroads tracks that drivers from so many different areas seem to hit. And as you mentioned Todd, the east Tennessee bunch is one of those local hotspots that still represent well, so we'll see how they stack up against Moyer, Bloomquist, Francis, O'Neal, etc. The track has also taken on a bit different shape, etc., banking wise as well and it's seemed to make the racing better there. I look forward to that, too.

KK: How about another early-season Chris Madden-Jonathan Davenport showdown? From Davenport's postrace comments at East Alabama, he wasn't exactly thrilled with Madden’s pass in the Bama Bash. What will happen if one of the races boils down to a battle between the two hottest drivers in the Southeast?

MR: And can I just say Todd ... I already like Kevin as a Fast Talker better than you. He agrees with all my points and realizes that I'm typically right about everything!