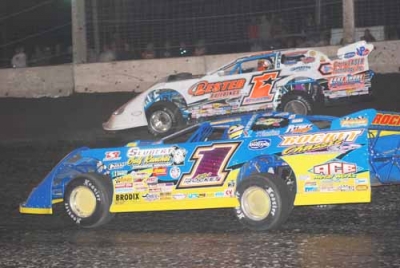 LINCOLN, Ill. (May 18) — Turnabout is fair play. Chub Frank got the better of Josh Richards at Lincoln Speedway, holding off the 20-year-old sensation to capture the Land of Lincoln 40 before a standing-room-only crowd. It was the first World of Outlaws Late Model Series victory of 2008 for Bear Lake, Pa.’s Frank, who two nights earlier watched Richards pass him in the final laps of a 50-lapper at Attica (Ohio) Raceway Park. | Postrace notebook | Slideshow

“I wasn’t giving up the top this time,” said a smiling Frank, recalling Richards’s high-side pass at Attica. “Losing two nights in a row would’ve been real tough to take.” Frank, 46, led the race from flag-to-flag after starting from the outside pole in the Lester Buildings Rocket car he calls Old Faithful – the same 2006-vintage machine that he flipped last month in Concord, N.C., and has since repaired. He survived an early-race scrape with Dennis Erb Jr. of Carpentersville, Ill., and heavy pressure from Richards to pocket the top prize of $7,150. “I’m happy to have it back,” Frank said of his favorite car. “It’s still gonna need a little work — it’s not quite the same as it was before — but it got the job done.”

Richards settled for second place in his Seubert Calf Ranches Rocket, crossing the finish line a couple car lengths behind Frank. Defending WoO champion Steve Francis of Ashland, Ky., finished third in Dale Beitler’s Rocket after starting sixth, driving what he called “probably the third-best car on the track.” He maintained his tour points lead with the run. Darrell Lanigan of Union, Ky., finished fourth in the gottarace.com Rocket, salvaging what started off as a miserable night. He was involved in a heat-race accident that forced him to the pit area with a bent spindle, but he returned and rallied from the rear of the field to qualify through the prelim and then charged forward from the 14th starting spot to claim his third consecutive top-five finish. Rick Eckert of York, Pa., completed the top five in Raye Vest’s GRT mount.

The battle for the win boiled down to a virtual replay of the event at Attica, with Frank setting the pace from the initial green flag and Richards stalking him as the race wound down. Richards reached second when he passed polesitter Shane Clanton of Locust Grove, Ga., on a lap-14 restart.

“It was almost like deja vu again from Friday night,” said Richards, who started fourth. “Chub was up top, and I was underneath him, underneath him, trying to pass him.”

Frank actually didn’t feel very confident about his chances of repelling Richards. “He was faster than I was,” Frank said of Richards. “I figured I had a bad car even before they dropped the green. When I was trying to warm the tires up, it didn’t feel good. I thought (Richards) was just gonna drive around me on the outside of (turns) one and two because I was so slow down there. But everybody was slow down there because it was so slick, so I was better off than I had expected to be.”

Richards made several strong bids for the lead, including one run off turn four on lap 30 that saw him fall inches short of nipping Frank at the start-finish line. But Frank had too much momentum off the outside and maintained command.

“The top had a rough spot (in turn four) where you could just gas it up hard and come off the corner hard, but it was a handful to drive,” said Frank. “It would shoot the thing up in the air, but it was fast. I just kept it up there and kept my speed up.”

"I felt like my car was real maneuverable, but I couldn’t quite clear him,” said Richards. “One time I thought I had him. I was clear up beside him, and I think if I was just another 6 inches farther ahead, I could’ve beat him down into one. But there was just enough room where he could still come down and keep me behind him.”

The outcome might have been decided in Frank’s favor when the race’s second and final caution flag flew on lap 36, for last year’s Lincoln winner Brian Shirley of Chatham, Ill., who was running fourth when he terminally damaged his car’s nosepiece by clipping an inside marker tire in turns one and two. The slowdown kept Frank out of heavy lapped traffic — and left Richards with a restart he didn’t want

“I knew he was a little bit softer tire on the left-rear (tire) and he fired a little bit better on the restart,” said Richards. “I probably would’ve been better off without it.” Nevertheless, a runner-up finish at the tight, quarter-mile oval put a smile on Richards’s face. “I feel like I won it,” said Richards. “A track like this normally isn’t my kind of deal. I was just hoping for at least a top 10 tonight.”

Frank’s first-ever triumph in the state of Illinois didn’t come without a dose of controversy. He was involved in an incident on lap 14 that sent Erb spinning into the infield entering turn one. Erb, who won the UMP Summernationals title and two WoO events in 2008, had caught Frank and was making a bid for the lead when the contact occurred. He nosed underneath Frank just past the starter’s stand and went sideways a split second later.

A caution flag flew and Erb restarted at the rear of the field. He pulled alongside Frank during the caution period to make known his displeasure with the turn of events. “I never seen him,” Frank said of the tangle with Erb. “He said I should’ve seen him, but he has to understand a few things: my car was rocking up, plus I was off the edge of the banking. And I wear a head-and-neck restraint, so I’m not real mobile turning my head.”

Ironically, Frank’s 14th career WoO victory came exactly one year to the day since he captured his first win of the 2007 season, at I-96 Speedway in Lake Odessa, Mich. He went on to win a series-best six features last season. Frank also moved into a tie for second in the WoO points standings with Lanigan, just six points behind Francis. He was the runner-up in last year’s points race.

Daren Friedman of Forest, Ill., rode out the night’s roughest accident, rolling his car once on the homestretch after tangling with Nick Bauman of New Berlin, Ill., during the third heat. He emerged from his car uninjured.