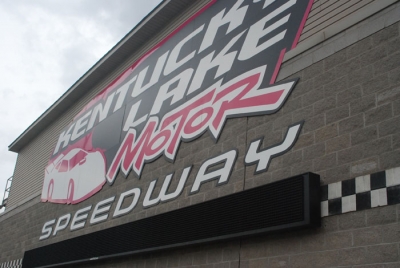 Ronnie Jones long ago was involved in drag racing, and his sons have dabbled in oval racing. But the 65-year-old trucking company owner from Hopkinsville, Ky., realizes he’s about the jump into auto racing with both feet after winning Thursday’s auction to purchase Kentucky Lake Motor Speedway.

“We’ve never been this deep into it, let’s put it like that,” the new track owner said in a phone interview. “This is getting into it.”

Jones and partner James Hale, 66, also of Hopkinsville, signed a contract to pay $990,000 for the 3/8-mile oval and adjoining 317 acres of property in Thursday’s absolute auction hosted by J.P. King Auction Company. The track was sold by Sherri Heckenast and her husband Shayn McMartin; Heckenast purchased the Dwight Greer-built track for $1.62 million at a 2004 auction and promoted special events before closing the track in 2009.

Jones and Hail haven’t operated a dirt track before, and Jones admitted it was on somewhat of a whim upon seeing the auction sign and becoming one of 11 registered bidders for the racetrack that originally opened in 1997.

“We definitely plan on bringing it back as a racetrack,” Jones said of the attractive property at the junction of Interstate 24 and the four-lane Purchase Parkway that many in the racing community were worried might draw a non-racing buyer. The partners “happened to run across this by chance,” Jones said. “We didn’t think we had a snowball’s chance, to be honest with you, but we ended up on the good end of it. And we’re going to make a go of it.”

“We’re going to try to do it right,” Jones added. “Obviously, it’s going to be an adventure.”

Pleased with the auction, McMartin was glad to hear the property, a total of 468 acres that includes concrete-based aluminum grandstands, 14 VIP suites, a restaurant and concession areas, will continue to host racing events.

“It gave me goosebumps when I found out it was going to remain a racetrack,” McMartin told auctioning company publicist Caley Newberry. “We’ve been involved in motorsports for a long time and have friends that are involved in it as well, and we know how important it is to this community. We’re looking forward to kids and families still being able to come here and grow up with the experience the Kentucky Lake Motor Speedway offers.”

Few details of the track’s operation have been decided, said Jones, who took a phone call at a bank upon returning to Hopkinsville following the auction at the racetrack, less than an hour’s drive away. Those details should firm up in the coming weeks, including consideration of who will promote and manage KLMS.

Jones said he and Hale would be “hands on,” but that “we have a couple of guys we already talked to in advance and they have a lot of experience, not only running tracks, but with NASCAR connections and stuff like that.”

The partners made two or three visits to the track before the auction, and Jones said he was surprised the long-closed facility was in such good shape with clean bathrooms, concessions and virtually ready-to-race. He said they’d likely replace the frontstretch catchfence, paint many surfaces and repair broken billboards, but otherwise everything — including a racing surface that was often inconsistent — appears to be in good shape.

With just those few improvements, “we could go racing tomorrow,” Jones said, although it will certainly be later in the year at the earliest. “It’s fabulous for a dirt track. They kept calling it the Taj Mahal. I don’t know if it’s the Taj Mahal, but it’s darn sure a Cadillac compared to most places you go.”

Jones, who operates Jones Brothers Towing & Trucking, and Hale, who operates Randolph-Hale Electronics, believe they can successfully operate the track “even though times are tough” economically, Jones said. “Once the economy gets better, I think you’ll see racing of all kinds get better.”

A self-described gearhead, “I’ve always been around (racing),” Jones said. “Like they say, once it gets in your blood, you can’t get rid of it.”

And while he was surprised to find himself the co-owner of a racetrack Thursday, Jones is ready to give it a go.

“I thought it would (auction) for quite a bit more than what it went for,” Jones said. “People are pretty scarce right now as far as spending money. It was a big gamble for us, but we thought it was worth it, so we’re going to try it.”