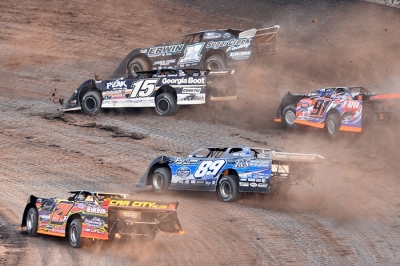 ROSSBURG, Ohio (June 8) — During Saturday’s preliminaries at Eldora, driver Jimmy Owens watched the Warrior Race Cars house car team repair the battered car of Scott James, who was leading the third heat when the rugged track surface got the best of him. | Complete Dream XIX coverage

While drivers praised the track surface during Thursday and Friday’s preliminary nights, and additional work helped smooth things out before the 100-lapper Dream XIX presented by Ferris Commercial Mowers, Saturday's six heat races provided a brutal challenge for drivers trying to keep their cars pointed in the right direction, to keep their sheetmetal connected to the car’s frame and to avoid chunks of mud coming off the track.

The surface threw a curveball at the weekend’s fastest qualifiers, the top six of whom started in the third row after the six-car inversion. Just one — Dennis Erb Jr. — overcame the inversion to earn one of three transfer spots as he finished third in the fifth heat.

After the third heat, the track crew spent a half-hour reworking the surface, making it somewhat more manageable for the final three heats. But that was too late for Jon Henry, who finished fourth in the third heat in a No. 15 that appeared as it had hit the wall. But Henry’s damage came from losing battles with the developing cushion of mud that battered cars in the early heats.

"I've never been kicked in the ass as hard as I was just now,” Henry said after climbing from his car. “It’s freaking crazy.”

The entire right side of Henry's car was barely hanging on, and even the right side of the roof and the air breather cover were bent after his 15-lap heat.

Dale McDowell, who finished second in the fifth heat said it appeared the track surface "just didn’t bond when they were grading it or whatever. The past couple of nights it’s been good. It was coming up in chunks, and that clay, once it rolls up and it comes in a roll and starts separating, and it’s like bricks.

“It seemed like it was spotty wet ... I don’t know what went wrong. I know they didn’t do it purposefully, but it made for some interesting events out there. It was the longest it’s ever taken to run heat races here, I’d say.”

Steve Francis made an eighth-to-third charge in his heat race, but his nosepiece was partly folded under, making his car even more than a handful and contributing to overheating problems that cooked his engine.

“There’s chunks coming out of the racetrack ... if you went up there in (turn) one you could see 'em all laying out against the wall,” Francis said. “And those things weigh 10, 15 pounds. When they hit you they knock you out, knock the noses off the cars. There’s been more stuff torn up here tonight than I think I’ve ever seen at Eldora.”

One of those chunks apparently struck the helmet of Jacob Hawkins of Fairmont, W.Va., in the fourth heat, sending him to the hospital with shattered nose. He was treated and released and will undergo plastic surgery when the swelling goes down, his brother Jared said.

Maneuvering through trouble required luck — and the chance to be out front and avoid the trickiest parts of the track, said third heat winner Eddie Carrier Jr.

Leading the race, "I could run my line to try to miss that stuff, and I’d kind of go in low and let it drift up off (the corner). Then (in turns three and four) I’d kind of run the middle and around the cushion,” the Salt Rock, W.Va., driver said. “It helped me when I got out front, because I could, you know, use the whole racetrack to be where I needed to be an miss that stuff.”

McDowell said the key "is to not to up in (the cushion) hard enough where you have to use a lot of brake.

“The unfortunate part of it is anywhere there’s holes, there’s traction, the racetrack’s soft and that’s why it’s beaten out, so there’s traction there. ... You need to be in it or around it to have a little traction, but you try to pick out a line you can go across it without” losing control.

McDowell credited the track crew for trying to improve conditions.