Drivers give thumbs up to reconfigured WVMS 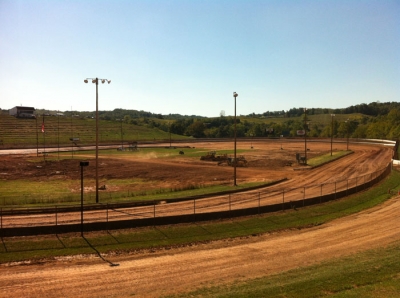 After a reconfiguration process that lasted nearly a year and a half longer than expected, drivers finally made their first competitive laps around a shortened West Virginia Motor Speedway during Sunday’s Buzzy Topless Classic.

Shortened from a 5/8-mile oval to a 4/10-mile, the Mineral Wells, W.Va., dirt track battled dust issues during its first race since hosting the 2010 Dirt Track World Championship, but otherwise drivers seemed pleased with the track’s new look as it reopened with a late afternoon event for topless Late Models. | Moran wins WVMS reopening

“It was a little bit more dusty than you would like to see, but for the first time out, starting early and the lack of rain this summer, I thought it was pretty good,” said winner Donnie Moran, who led every lap of Sunday’s feature for a $3,000 victory in the American Dirt Racing Association event. “It was definitely shorter and not as hard on the car as what it used to be. I think it really turned out fine.”

Construction work to transform the sprawling oval into a more fan- and competitor-friendly layout began in April of 2011. But multiple delays and setbacks drug out the reconfiguration process as crews hired by Mountain State Motorsports Promotions worked to shorten the track’s straightaways by relocating turns three and four closer to turns one and two.

The final product is indeed much shorter than the track’s previous footprint. But the new positioning of turns three and four left the track with a different shape than what drives are accustomed to, as Sunday’s runner-up finisher Eddie Carrier Jr. of Salt Rock, W.Va., pointed out.

“It’s different. It’s not a perfect oval, so getting into (turn) three’s a little tricky,” said Carrier, who was a frequent competitor on the track’s old configuration. “I like it better, but it was slick yesterday, too. That kinda made it better.”

Besides the hope of producing better racing, one of the biggest reasons for shortening the track was to reduce the amount of wear on engines by decreasing cars’ speeds and momentum. According to Carrier, track promoters achieved that goal.

“It wasn’t no motor track,” Carrier said. “It was slick and slower. And it was smooth, too. The way it is now, it makes you have to let off, where used to we’d just run wide open around there.”

Moran remembers well that the larger WVMS took a heavy toll on engines. Just the threat of that trend continuing with the new configuration was enough to keep the Dresden, Ohio, driver's son Devin from competing Sunday.

Down to one engine for the remainder of the season, the younger Moran didn’t want to take the chance of hurting his only powerplant until he was sure the track would be less abusive.

“That’s one reason Devin didn’t go. He’s down to one motor right now and didn’t want to take that chance,” Donnie Moran said. “Now that we saw the configuration of the track ... I’d let him go next time in a heartbeat. Even with the one motor he has, I don’t think it’ll be a problem. I just don’t think it’ll be the motor-eater like what it used to be.”

Moran also noted that even though the track was easier on engines, drivers still need quality motors to be competitive.

“You still need a good motor anywhere you go nowadays. Maybe not on a local basis, but anybody that runs bigger races today has a pretty decent motor,” Moran said.ï¿½ “But it definitely didn’t need as much motor as it did before. ... It still took some motor, but you don’t keep going down the straightaway like you did before.”

While third-place finisher Jared Hawkins joined Moran and Carrier in applauding the new configuration, the Fairmont, W.Va., driver noted that the track isn’t all too different than it was with its previous layout.

“It’s just like the big one, only a little smaller. It feels like it’s just as fast, but you just don’t keep that speed up for so long,“ Hawkins said. “I think it helped some. There’s no more of that five-minute pull down the backstretch.

“It kinda got dusty and one-laned, but if they keep working on it where we can get out farther into one and two and where the bottom will stay good in three and four, I think that place will be pretty racy.”

Like Moran, Hawkins remembers how tough the track used to be on engines, especially on smaller engines like the one he ran in his family-owned team a few years ago.

Now racing in quality equipment from Bobby Lake Motorsports, Hawkins doesn’t have to worry about not having a motor strong enough to compete at larger tracks. Even so, Hawkins is confident the new configuration will be better for teams with lesser engines.

“We never had any motor to really compete down there back then. We had a smaller motor and the tongue on that thing was always hanging out after just a few laps,” Hawkins said. “Feature time, I guarantee none of us were wide open. I know I wasn’t, and I doubt Moran and Carrier were.

“I was looking at the rundown; some of those guys were keeping up really well, and I know what motors they’re running. And the way time trials were, everybody was right there around the same lap times really.”

A sample size of just one event may be a bit small to judge the overall success of the track’s reconfiguration, but Moran is among the drivers no longer skeptical. The veteran driver firmly believes the track is ready to once again host major Dirt Late Model events.

“The facility’s still the same,” Moran said. “They could’ve shortened to a quarter-mile, and with the facility they have, they still could have the biggest race of the year there. The track’s going to be fine with the new configuration and all, so I don’t see why it can’t host more big races like it has before.”