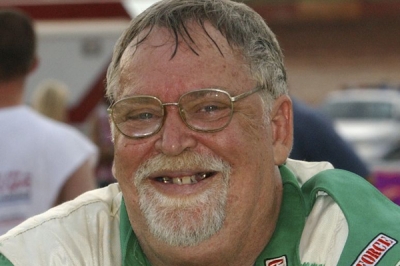 Georgia Hall of Famer Buck Simmons in the final years of his career. (latemodelillustrated.com)

While racing as a teammate to Buck Simmons on the National Dirt Racing Association more than 30 years ago, Larry Moore discovered he was a bit more mechanically inclined than the bearded Baldwin, Ga., driver.

Moore frequently found himself helping with the setup of the fellow future Hall of Famer’s race cars, and he wondered how Simmons had become such a good driver without better learning the craft of setting up race cars. | David Allio photo | Slideshow | Obituary

“He was so versatile. I’d watch him when I made changes; he’d go into the first corner the first time and push. He’d come in and I’d say ‘Well, what’d you think of that?’ He said ‘Pretty good.’ I’d ask how come he pushed in the first corner and he always said ‘I just wasn’t driving it right.’ I’ve never ever seen a driver that way.

“He didn’t say much anyway, but he never complained about his car. He could always adjust his driving to fit however the car was, and just make it fast.”

And over the span of more than four decades, Simmons was always fast, so fast he racked up a whopping 1,024 feature victories in dirt and asphalt competition before hanging up his helmet eight years ago. The winningest driver in NDRA history and dirt racing pioneer died Sunday afternoon. He was 66.

His long and lustrous career earned him the nickname “the Living Legend,” and fans and fellow drivers alike remembered him not only as one of the sport’s winningest drivers but also as a racing icon. Richard Pearson, a long-time track reporter and Southeastern racing historian, called Simmons a “folk hero” who inspired others to race.

“Buck was one of the greatest dirt racers and really did a lot for dirt racing,” Pearson said. “There was a lot of people that got into racing because they wanted to be like Buck Simmons. Kids would go watch him and they’d say ‘That’s what I wanna do when I get grown.’ He was a big inspiration for a lot of race car drivers.”

Moore, who raced out of Dayton, Ohio, spent time as a teammate to Simmons in Jim Erp-owned machines sponsored by Tri-City Aluminum during the heyday of the NDRA series in the late '70s through the mid-'80s. The two drivers frequently raced each other up front, with Simmons setting the national tour’s all-time win mark at 23 victories followed by Moore’s 19.

Moore was among the drivers Simmons topped for his only NDRA championship in 1981.

“He was one of the very best drivers in the country,” Moore said of his teammate. “Every race I went to he was the guy I had to outrun. He was my teammate and my biggest competitor.”

Moore first met Simmons on the first year of the NDRA circuit in 1978, but it wasn’t until the two drivers’ first year of racing as teammates in 1981 that he really got to know the quiet Georgian. Along with appreciating the ability of Simmons to adapt to nearly any setup, Moore recalled his clean style of racing.

“He would never wreck, and he would never tear anything up,” Moore said. “We never had to put a fender on his car or nothing. He was just a tremendous driver. I learned a lot from him.”

“We’d be racing through traffic for the lead and I’d pinch him off on a lap car and wouldn’t give him enough room where we could both go through,” Moore said. “I thought for sure he’d have to shut her down, and I’d think ‘I’ve got some breathing room now.’ But I’d look up and, just like that, there he was again.

“After the race I’d say something like ‘Sorry Buck, I didn’t mean to cut you off on the lapped car’ and he’d say ‘That’s all right; it just made the race a lot more interesting.’ ”

Simmons’ sustained success on the racetrack made him a shoo-in for the National Dirt Late Model Hall of Fame when it was established in 2001. Bob Markos of the Hall of Fame considered Simmons an easy pick for the Hall’s inaugural induction class.

“Seeing Buck inducted into the very first class, that was quite a class and there was no doubt that he belonged there,” Markos said. “He was one of the greatest race drivers. And that’s not just based on what I saw. If you talked to any of the other drivers ... they all agreed that Buck was one of the greatest drivers they ever raced against. He was just a natural talent.”

Current racers also remember Simmons as a great driver. Fellow Georgian Clint Smith, a regular on the World of Outlaws Late Model Series, first witnessed Simmons’ talent as a fan, then later as a competitor.

“In his day, he was one of the best drivers in dirt racing, especially in the NDRA days of the '70s and '80s,” said Smith, who outpointed Simmons to win the inaugural Hav-A-Tampa Dirt Racing Series championship in 1993. “When I was growing up as a fan before I started as a driver, you’d always heard about Buck Simmons. He really was an icon.

“When I got to racing and ran Hav-A-Tampa, me and him was running for championship and I actually passed him in the points. I had to race with him each and every week, and he was just so tough. To win that inaugural year, we thought that was just super-big because we done it against Buck Simmons.”

Simmons dabbled in asphalt during his career, climbing high enough to make starts in NASCAR’s highest ranks. He made eight career NASCAR Winston Cup starts in 1979-80, posting a best career finish of 14th at Atlanta Motor Speedway in a Kennie Childers-owned car in 1979. But Simmons eventually settled on a dirt career, which according to Pearson, was his desire all along.

“Buck did a couple of years in NASCAR, but he really didn’t like it,” Pearson said. “He believed that if he stayed with it he could be as good as any of ‘em. But that was what he really wanted to do, was race on the dirt. That’s what he grew up on and he always came back to it.”

Simmons first got out of racing in the mid '90s, taking a three-year hiatus that left him about 40 victories shy of the ultra-rare 1,000-victory plateau. He then got back behind the wheel and completed his career in a Gerald Voyles-owned car, scoring his milestone 1,000th career victory May 11, 2002, at Lavonia (Ga.) Speedway.

With backing from a John Deere dealership, the Voyles-owned cars often sported primarily green graphic designs, which wasn’t a problem for Simmons.

“He wasn’t superstitious. He’d eat boiled peanuts and didn’t mind driving a car with green on it,” Pearson said. “I guess that made him a perfect fit in the John Deere car, because you know a lot of drivers wont even sit down in a green race car.”

Simmons didn’t travel as much during his time driving for Voyles, but he was still a tough competitor. Smith recalls racing against Simmons as he closed out his driving career at tracks close to his northeast Georgia home.

“As he got older in years, he’d still be tough when you’d go up in the Toccoa and Hartwell area and race against him,” Smith said. “He had to be 60 years old and was still a tough man to outrun.

“He always was a great driver, and I’m sorry to see him go. He was one of those old-school guys that was really, really good. He’s one of the all-time best.”