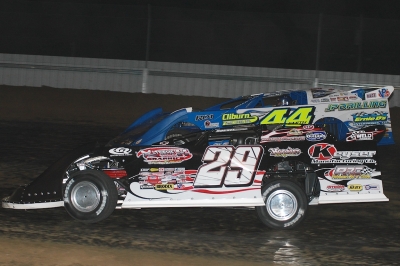 In earning $10,000 in the 3/8-mile oval’s Dirt Late Model Magazine 50, the Union, Ky., driver fought off a stern challenge from Clint Smith of Senoia, Ga., in the race’s late stages. | Lanigan wins at Independence

Smith actually lead lap 42, but just as it appeared that Smith would surge ahead of Lanigan for good exiting turn two on the next lap, Lanigan’s car slipped up the track and into Smith. Smith hopped over the cushion and lost his momentum, allowing Lanigan to power away with the lead.

The veteran driver known as Cat Daddy wasn’t happy happy after the checkered flag. Feeling that Lanigan crowded him up the track on the 43rd lap and cost him a victory, Smith had little to say when WoO announcer Rick Eshelman attempted to interview him during the postrace ceremonies.

When Eshelman asked Smith to describe the last 10 laps, he muttered, “Uh ...” then threw up his hands and walked away. The Independence spectators gave him a big cheer — and moments later, after Smith climbed back into his car, Lanigan temporarily stopped his victory lane picture-taking to lean into Smith’s cockpit and discuss what had transpired.

Lanigan was admittedly a bit upset with the turn of events that clinched his latest victory. He has been close with Smith this season, caravanning with Smith down the highways from race-to-race and collaborating on setups.

“I was getting a little loose,” Lanigan said of the race’s final laps. “We went with a little softer tire, and Cat got on the outside of me. I had the bottom groove and I went in there (through turns one and two) and got loose a little bit and got into him, but nothing intentionally. We were just racing hard. I knew he don’t want to let him win, so I’m gonna race him hard for the win.

“I know he’s mad at me, but I wasn’t trying to get into him. I just lost the air and I was loose, and I got into him.

“He definitely had a good car,” added Lanigan, who broke the $250,000 mark in earnings with his victory. “We’ve been working together good, and I know he’s wanting to win as bad as I do. He’s got the wins coming.”

After taking some time to cool off, Smith spoke eloquently about the situation at his trailer following the race.

“He kind of made a defensive move to the bottom to give me the top, and the top was better,” said Smith, whose WoO winless streak reached 52 races since his last victory, on May 8, 2011, at Needmore Speedway in Norman Park, Ga. “When I got up there on the outside of him he just ... it’s just a deal, I guess. I think he went in there hot and knocked me up out of the way to get the lead back. He knocked me up so hard it put me in the loose stuff and he got back by me.

“He drove in that corner hard and came across those holes and hit me, and I’m sure when he got in those holes and got to bouncing and slid into me, he kind of said, ‘Uh oh.’ ”

Smith let Lanigan know his wasn’t pleased, but he also made it clear he wasn’t going to hold the scrape against his pal.

“It’s hard to race your buddy sometimes, you know what I mean?” said Smith. “The way I kind of got to look at the deal is, I wouldn’t have been running second and trying to pass him without his help, so it’s a Catch-22. My car was good, but he’s helped me make it good.

“Me and (Lanigan) are buddies. We travel up-and-down the road together. We’ll travel with him tonight, and we’ll go on tomorrow night (at Wisconsin’s Shawano Speedway) and see if we get it on.”