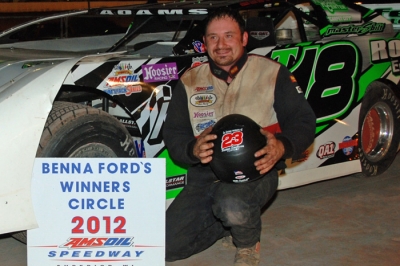 The day after his best friend and father figure died, T.J. Adams headed for Amsoil Speedway in Superior, Wis. Adams slipped into the late Keane Laakson’s firesuit. He climbed into the seat of Laakson’s old MasterSbilt Race Car. Then he pulled Laakson’s helmet over his head. | Weekly results | Slideshow

With everything on his side — and his mentor’s voice in his head — Adams led the final laps at Superior to capture the first WISSOTA Late Model feature victory of his career, stirring a wave of emotions through the supportive crowd at the 3/8-mile oval.

“I sure hate not to have him here,” Adams said in a Saturday telephone interview, “but to win last night. It was his car and his engine, I wore his entire driving suit. To get that was really special.”

Adams paid the ultimate tribute to Laakson, the 46-year-old who died early Thursday after an 18-month battle with amyotrophic lateral sclerosis, the disorder often called Lou Gehrig’s disease that withered Laakson’s muscles, rendered his hands useless, robbed him of speech and shriveled his 240-pound body to less than 100 pounds.

Laakson, a long-time WISSOTA racer of the No. 23 at Rice Lake Speedway and other Wisconsin ovals, was honored with a decal on Adams’s No. 18 and another on the back of Laakson’s old black helmet: “In Loving Memory of 23 Keane Laakson 7/26/12.”

Adams, who was 12 when his own father was killed in an accident while working underneath a truck, had grown to love Laakson, his long-time friend, his boss at Stone Lake Oil & Propane and a fellow dirt racer.

“Keane was like my dad to me. I spent Christmases and birthdays and everything with him. It’s not about me,” the Hayward, Wis., driver said of his victory. ”I don’t want the attention. I just want to do everything I can to make him smile and proud.”

The morning after the victory, Adams went to work at Stone Lake Oil, gave Laakson’s wife Sam a hug, showed her his helmet and told her about a victory he’ll never forget.

Adams first met Laakson when he was just 3 years old, and the family friends drew closer as racing buddies, and closer still when Laakson hired Adams nine years ago at the firm that provides propane to homes and businesses, and fuel to racers throughout the upper Midwest.

“It was one of those deals where we worked together every day, and after 4 o’clock we were best friends,” Adams said. “We hung out every day, pretty much.”

Adams admired Laakson’s positivity at the racetrack and beyond, never forgetting that fun is the primary objective.

“He loved racing. He just did everything he could to help anybody. He was one of those people that at the racetrack, you could walk up to him and it didn’t matter who you were or what questions you had, he would always take the time to hear you out,” Adams said.

“He never took it (too) seriously ... he always told all of us, ‘Go out there and do the best you can be and have fun.’

“He was just one of those people that no matter the situation, he always told you to keep your head up, things will always work out. He always had a positive spin on things.”

That positivity was put to the test over the past year and a half as ALS wracked his body.

“I’ve never seen something do like that to somebody’s body,” Adams said, recalling the pain Laakson faced with muscles between skin and bone deteriorating. “His skin was just wrapped around his bones like chicken skin on meat.”

Even through the darkest days, Laakson insisted he’d beat the disease and continued to work as much as his health allowed.

“He just never gave up,” Adams said. “Every day he could be at work, he was here.”

Adams had a feeling Friday would be a special night at the racetrack. His heart heavy with Laakson’s passing, the first indication that things were going his way when he bobbled to lose four spots in his heat race, yet rallied back to finish second.

“I just felt like he was there,” Adams said. “He was telling me it was going to be all right.”

Then in the main event, Adams was running second, rolling around the track during a lap-17 caution when he had a premonition.

“For some reason, I knew it in my heart at that time, something told me I was going to win,” he said. “I had three laps to go, and I just got this feeling when I was sitting there, going around on the (caution-flag) laps, I could hear his voice tell me just go out there and race my own race, everything was going to be OK.”

Adams briefly slipped to third on the next-to-last restart, but a tangle between Todd Frank and Darrell Nelson put Adams out front, and he pulled away in the final laps for the victory.

“I just really feel like he was there helping,” Adams said. “I don’t go to church or anything — I’m not against it — (but) for not doing any of that stuff or being really, really religious, it’s definitely made a point to me. It’s changed my views on things, because I really feel there is something. There’s something out there.”

Announcer Chris Stepan had described the circumstances of Laakson’s death along with the Adams connection, and the crowd embraced the winner’s victory lane celebration.

“To go up on the podium after the feature race ... they were probably thinking, ‘Who is this guy?’ They knew the car, they knew the situation, but like I said, I’d never won a feature before. I just got out of my car and congratulated everybody on a great racetrack and asked ‘em if I could say a little something about Keane.”

And he did, telling the story of the man he’ll have figure out how to live without.

“I was just a very special thing and I was very proud to fill his shoes,” Adams said. “Everybody stood up and clapped and cheered ... it was special. It was very nice.”