Notes: Owens falls short after I-80 rally from 16th 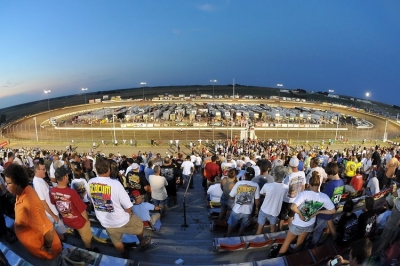 A look at I-80 Speedway. (fasttrackphotos.net)

But the rally from the 16th starting spot for Owens stalled at third place when he couldn’t find a way past Steve Francis, and the Newport, Tenn., driver ended up settling for a fourth-place finish that could’ve been better.

“It was kind of heartbreaking,” Owens said. “The track kind of locked down there toward the end. We had us a good groove going on the high side, and Francis was running the bottom and he kind of moved up. I was having to cross over and I spent a lot of time trying to get around him.

“I’d really like to have seen another restart before the track locked down on us, but it is what it is. We had a great car (and were) able to maneuver around, run the bottom and the top. We found that groove on the high side and everyone else was running about a lane or two below us, and we were able to roll by ‘em. We had a super good car for the feature, but things just didn’t pan out for us the way we wanted ‘em too.”

Birkhofer ran unchallenged most of the 80-lapper in racing to a $26,000 payday in Nebraska’s richest Dirt Late Model event while Owens never quite got over the hump.

“I seen how good Birkhofer was, and he’d eventually pull off. But I feel like if I’d have had a good track in front of me, we might’ve been able to race with him a little bit,” Owens said. ”Those guys were using the track — they’d go in low and come out high, that’s the best way to make it work — so you gotta make your way and get around ‘em the best you can. He was just running a line that was actually killing our momentum. I probably could’ve slid-job him down here in (turns) three and four at one time, but I never did. I didn’t want to tear up. You gotta finish. And that was my main goal. I really wanted to win, but you’ve gotta finish, too.”

While Brian Birkhofer’s 80-lap victory was never in doubt over the last 70 of 80 laps, he survived a few tense moments that could’ve spelled disaster with a cut tire or hampering body damage. One of them came on a lap-40 restart as second-running Don O’Neal made contact when Birkhofer tucked low entering turn three.

“I came into three and I was kind of entering (the corner) the way I always did, and I didn’t see O’Neal there,” Birkhofer said. “I felt him hit. I didn’t know if it was him or Francis. So, you know, I apologize to Don for that.

”It actually helped me, because when I did that, I got to where I slid up off (turn) four. I said, ‘Wow, this momentum line feels better than me trying to slow down and run that traction ring.’ So it was a blessing a little bit.”

Even after finding a quicker line, Birkhofer had to make some smooth moves in lapped traffic, including bouts with Jonathan Davenport and Wendell Wallace. Birkhofer and Davenport came together exiting turn two in the second half of the race.

“I got in hot there and I got into Davenport. I was trying to get beside him and I kinda of slipped. And we rubbed. It tore the decals up on the right side, so Chad Simpson will be happy I’ve gotta buy some more.

“Wendell, on the backstretch, I just didn’t get far enough (up) there. I thought he was going to give me room and I just had to hit the brakes. Lapped traffic is lapped traffic and those guys are racing, too. I just had to dissect my way through there without getting torn up.”

Two-time Lucas Oil Series champ Scott Bloomquist came from his seventh starting spot to finish second in his debut at I-80 Speedway, but he never mounted a serious challenge on winner Brian Birkhofer.

“The car was really good there at the end,” Bloomquist said. “They were telling us there on the watch that we were a few tenths better than Brian. I saw we were getting a little closer to him. The car was really good at the end, but we needed a little different setup. This is our first time here, and we got pretty close. I think we can fine-tune a little bit more and probably be a little better next time, so we’re looking forward to coming back.”

Bloomquist took a while before he got into contention, finally getting to fourth on lap 55 and picking up two more spots in the race’s final 10 laps by overtaking Jimmy Owens and Steve Francis.

“We messed around with the bottom a little too long,” Bloomquist added. ”Jimmy Owens, he got by us there (on the high side), and we moved up and didn’t feel like we were as good as he was. Then I just started working it and felt like we might’ve been better, then the next thing you know he got in a little hot, we got by him.

“We were definitely better than Francis. We ran him down and went by and went on, and looked like we were catching Brian, but hat’s off to Brian. He did a good job all weekend. He unloaded with his stuff right, won both of his heat races. We were using last night as a learning curve. I tried some way different setup stuff in both heat races just to get me some kind of direction for tonight. We went the right direction — I just could’ve fine-tuned it a little bit better.”

Steve Francis of Ashland, Ky., was disappointed to lose second in the final laps of the Silver Dollar Nationals, but he knew he couldn’t complain after unloading a Barry Wright Race Cars house car that was barely competitive in Thursday’s practice.

“We gained all weekend, and that’s kind of a tribute to the crew, Barry, Lance, Steve, Joe, all the guys that helped us out here from Omaha,” Francis said. ”It really is, because we unloaded practice night about a second off the pace and kind of progressively gained on it all weekend long. Really (we) had the second-place car and kind of screwed up with lapped cars there at the end. Probably would’ve been better off if I just would’ve just rode there and took my second. The racetrack got a little bit of rubber right there the last five or six laps, and I drove out of it like a dummy and let Scott (Bloomquist) get under me, trying to pass those lapped cars on the outside. Then I was hung there and then I ran right at (Bloomquist’s) rear quarterpanel the rest of the race.