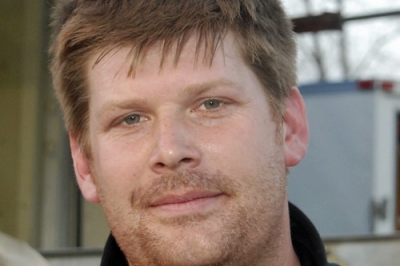 WILLIAMSBURG, Ohio — Wayne Chinn hadn't seriously contended for a victory in his own No. 1 race car since the 2009 season, so the driver nicknamed "The Sniper" was definitely taking aim at leader Brian Ruhlman last Friday at Moler Raceway Park.

The 31-year-old driver from Bradford, Ohio, pulled briefly alongside Ruhlman a few times in the Sunoco American Late Model Series event before eventually settling for second, a runner-up finish that was satisfying for a driver whose racing pursuits have been slowed as his family launches a new recycling center.

"It's been a while to be back in our own stuff, to tell the truth. Last year we kind of took over half the season off altogether just to get started in this business," Chinn said afterwards. "It's good to be back in the seat, I'll tell you that.

"I know we've got decent equipment. There's always stuff we can update and get better at, which will come in time. I've gotta kind of put racing back in focus here and start dialing down on it."

Chinn's realistic as he rebuilds a race team that, at its peak, followed the Lucas Oil Late Model Dirt Series in 2008 with a 10th-place finish in series points. He scaled back to a regional schedule in 2009 with steady success, including a stretch of five victories in seven starts during an early-season hot streak.

But racing funds were drying up as Chinn's family-owned AWP Equipment Rentals struggled during the economic downturn as construction contractors simply weren't needing forklifts, cherry-pickers and booms. The Chinns shifted gears and launched 1 Shot Services Scrap and Recycling Center — the logo features Wayne's trademark No. 1 with a crosshairs — to make ends meet.

"I'll tell you what, we've struggled with the family business for a long time. It goes from good to bad to worse to absolutely horrible to start over to good again. ... we're happy with where we're at businesswise, but man, it's taken a lot of time," said Chinn, who works with his father Jim. "It takes a lot of time and a lot of effort from a lot of people to continue to move heavy stuff in and out every day. It's me and him doing it together, and it's been a good venture so far, but we're just brand new at it, so we're learning and growing and hopefully we can keep spending more and more time on the race car and get to do what we love."

Chinn spent 2010 in Gary Engle's No. 15 car (winning three races at Moler) and ran it part time in 2011, notching a single victory. But he's refocusing on his own Rayburn Race Car for 2012, and while many C.J. Rayburn followers have switched to the four-bar suspension, Chinn's sticking with the traditional swingarm setup of the Hall of Fame chassis builder from Whiteland, Ind.

"We've been back and forth with it. Last year we actually ran our own car, we were on four-bar a little bit and swingarm a little bit. It takes a lot of time to learn from scratch on any type of setup, so we figured we'd start the season on something that we kind of had a good idea about setupwise. With some of the changes, we've had to kind of go outside of our normal setups and dial 'em back in, so it's been a couple of weeks trying.

"There's a whole bunch of races on it, but it's been a good car. We have tried doing some updates here and there, but I'm not so sure we wouldn't be better off — at the beginning of the season especially — with the old basic, tried and true Rayburn setup, because when there's moisture, they're hard to beat. We've kind of went to a few things that'll kind of help us on the slip, hopefully, but might be making us chase the setup a little bit right now. It's just like every other day in racing — a learning curve."

With more than 100 races on the car, Chinn is trying to keep it updated — "Now we've gotta update some of the other parts to keep up with the updated parts," he cracked — but he's confident he can be competitive. And someday, perhaps, rebuild his race team enough to expand his local and regional schedule to include some national events.

"I'd love to go run Lucas or any of those big series and have new equipment and go do it how we'd want to," Chinn said after his second-place run at Moler. "We're getting ready to load up and go home so we can open up at 8 in the morning and work until noon, and figure out where we're going to race tomorrow. That's the hard part. We're open Saturdays now. That really makes a different in where we can race and how we can race.

"I won't say we're operating on a skeleton crew, but you know, you can always use more help. So as we grow and can afford to bring more help in, maybe we can get out and (make) longer hauls. But to start the season and do this, we're kind of going to (race) close to home."

Chinn, whose career-richest victory was a $4,000 triumph in '09 at now-closed Rocky Top Raceway in Coal Grove, Ohio, plans to keep plugging away to reach his goals.

"If I'm honest with myself, I guess the race car is lacking a little bit compared to what we used to throw it at, every night, all night," he said. "But it's just because we're throwing it out of business so we can keep racing the right way for a long time to come."