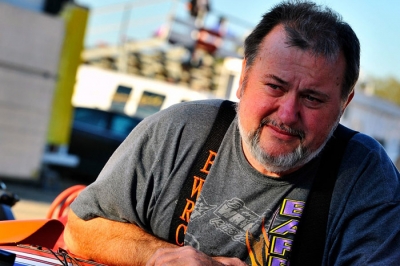 COLUMBUS, Miss. (Oct. 28) — A decade ago, hall-of-fame chassis builder Barry Wright said that he thought Dirt Late Models were getting to a point that just about anybody could drive one. Now, the legendary South Carolina racer who has provided winning rides for fellow Hall of Famers Scott Bloomquist, Freddy Smith and Ronnie Johnson, among others, isn’t so sure.

During his lengthy tenure in the sport, Wright has watched as dirt racing has transformed from back yard mechanics competing in race cars they built themselves, to a blend of young drivers and veteran pilots competing in machines built from off-the-shelf parts.

After watching his own Barry Wright Race Cars entry driven by Jonathan Davenport gain the pole Friday for Saturday’s Southern Belle Cotton Pickin’ 100 at Magnolia Motor Speedway, Wright said he’s no longer sure that just anyone can strap into one these 800-horsepower machines and get the job done.

“Used to, you would go buy a car, they’d take it and work on it themselves and make it do what they think it needed. These kids today, they want instantaneous (success),” said Wright. “Now you just buy it. But the ones that was doin’ all the winning then, they know how to work on their stuff. They know what they want.

“The ones still winning races (now) ... Scott, Billy, Birky ... are the ones with experience. You can’t beat experience.”

It’s experience that Wright has, and that Davenport continues to acquire. The combination made for a phenomenal campaign a year ago. But the 2011 season — at least the first eight months — didn’t go as scripted.

“We’ve got a little shop dog. She even knew we were running bad because she didn’t even want to go to the races with us,” Wright joked.

While struggling to match the winning ways of 2010, it’s no wonder that Wright had his doubts as well. But the South Carolina-based team and the Blairsville, Ga., driver have found a little magic this fall. After a dismal early season, the team has reeled off a handful of victories including a $15,000 payday last week at Whynot Motorsports Park in Meridian, Miss. Davenport backed up that victory by earning the pole for Saturday's Cotton Pickin’ 100, another $15,000-to-win special deep in the heart of Dixie.

“When you have a team clicking, it takes a lot of teamwork, like baseball,” added Wright. “Jonathan knows what he wants to make him go fast. We try to give it to him. Sometimes it clicks and sometimes it doesn’t.”

When things aren’t clicking, it can tend to snowball quickly. Davenport said that a string of bad finishes can start to weigh on both driver and team.

“It’s real tough. This is the most humbling sport in the world,” Davenport said. “There are so many different variables that could go wrong … a flat tire, the invert, drawing a bad qualifying pill.

“When you get down, it’s hard to get back up. This business is all about confidence I think. When you’ve got confidence in a car, you can put the car in different places you might not have before. We got this new car out and it’s just been working.”

While a new car and good results can certainly rebuild confidence, Wright’s been around long enough to know that success is sometimes fleeting. And he still contends that it’s not always the car.

“You still have to have the mechanical ability to put it all together … to work on your car and know what you want,” Wright said before echoing another Hall of Fame chassis builder.

ï¿½“It’s not always the car. Sometimes it’s the driver. C.J. (Rayburn) will tell you that,” Wright added. “He’s the one person who will tell you exactly how it is. One time he told (a driver), ‘You just can’t drive.’ï¿½ I asked him how’d he do that, because I just couldn’t say that. I laugh every time I think of that.”

With that said, Wright actually has been pleased with the results of the new car. The team has tried to work in a handful of test sessions, but Mother Nature has slowed that process as well. Even when they do get out to test, Davenport says the results can be misleading at times.

“You can go test and there’s only three or four cars and the track conditions aren’t what they would (normally) be like,” Davenport said. “You think you’ve learned something and you come back to race and you’re worse than before. We could go try 20 things and one will work and 19 of them won’t.”

Wright meanwhile contends that while a new car has been a factor in the turnaround, a change in philosophy has helped right the ship as well.

“We just started racing smarter,” he said. “We pick up the phone on Monday, find out where they are going to invert and then go somewhere else. If there’s nowhere else to go, then we’ll go where they invert. But we won’t if we don’t have to.”

And much like his long-standing slogan, Wright said of the recent success, “we’ve just been doing things right.”

"We’ve got a little shop dog. She even knew we were running bad because she didn’t even want to go to the races with us."