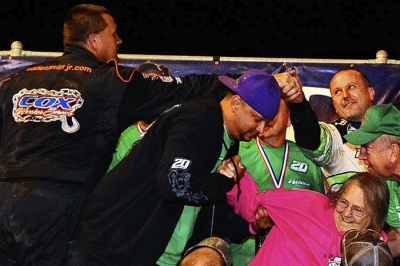 The 40-year-old Salt Rock, W.Va., driver picked his way to the front of his heat, but at the white flag, a spot among the three cars transferring to the feature wasn't assured until he made the best move of the prelims.

With race-long leader Dustin Neat faltering under the onslaught of Chris Madden and Jon Henry, Carrier went to the high side in turns one and two. Madden led while Henry and Neat lost momentum, allowing Carrier to sweep around both of them exiting turn two, turning his 10th starting spot in the heat into a second-place finish.

That put him starting 12th in the 100-lap feature and — just like in his heat race — he made another key move exiting turn two to take the second spot late in the race.

This time, it was a Darrell-Lanigan-Don O'Neal tangle in turn two that allowed Carrier to zip past for a three-wide pass down the backstretch, giving him a lap and a half to take a shot at leader Jimmy Owens.

"I seen Darrell and Donnie doing what they were doing, and I was like, 'Man, if they keep that up, I need to get up there closer so if they do make a mistake I can get 'em.' Then they did get together coming off of (turn) two and I got to second, and when I got to second, I was like 'Let's do what we can do.' "

Carrier's last-ditch slide job in the final corners fell just short, but his second-place finish was his best in three starts. He also notched his second straight top-five finish in one of Eldora's major events.

"We've been good here, but it seemed like we'd break something or have bad luck on the draw or get in a wreck early in the heat," Carrier said. "That's been the same car we've been bringing up here about three or four years. After we ran it in the Dream, we took it home and put it on jackstands, and went through it, put a body on it and that's mostly what we save that car for. It's been good here every time we've been here, but it makes us feel good we got two good finishes up here finally."

Carrier was sorry car owner and engine builder Carl Grover wasn't able to see his dramatic finish, but he knows the team has good things going.

"I don't want to sound cocky or nothing, but we've got a good team here. We've been building us a team for eight years and it keeps on getting better and better," Carrier said.

Where goes the performance rank in his career? "It's a good thing to have on your resume," he said. "You always want to say you won the World 100, but second's not bad. I ain't going to be like Ricky Bobby and second's last."

While many tours and tracks have adopted double-file restarts over the last dozen years, Eldora has stuck with a single-file line until this year's World 100. The track added its own twist, allowing the top three cars to run single file before double-filing the rest of the field starting with the fourth- and fifth-place cars.

The restarts certainly added another dimension of excitement — or chaos? — as drivers often gained or lost positions after a yellow flag.

"That double-file restart, I think it helps us sometimes, and I think it's a pain in the ass, especially when the track's rough down there in (turns) one and two," said eighth-place finisher Jeep Van Wormer. "There were multiple times where there were guys flat sideways in front of you, and you've gotta check up, and there's other guys that are banzaing behind you. It's just tough."

Polesitter Chris Madden of Gray Court, S.C., has long been critical of Eldora's heat-race inversions, but it sounds like he's discovered something he dislikes even more.

"I got passed by three race cars in the race," said Madden, who finished sixth with what he believed was a car good enough to finish third. "The rest of them I got passed because of stupid-ass double-file restarts."

How often did he get banged around on the restarts? "Every time," Madden said, pausing for dramatic effect. "Every time."

If he'd have "finished in the top three, I would've been OK with that," Madden said. "But all of this other crap ain't racing. That's not racing. That's just damn luck of the draw. I'm not playing cards."

Jared Landers of Batesville, Ark., made the most noticeable charge in the World 100 feature, starting 21st in the 30-car field and breaking into the top five after a lap-67 caution.

But his run in using the lower groove while most drivers stayed up high fell off not long after that when he suspension problems — and worse — hampered him the rest of the way.

"I think I busted a shock early on one of them holes, and I got real soft on the nose and it kind of wouldn't act right," the Clint Bowyer Racing driver said. "I was good on the bottom of this racetrack coming up through there, especially on the restarts, and I'd try to get in line and ride. And I think I ended up killing a tire.

"Once I blew the shock out I started hanging out and killing the edges of my tire, then I go in there and bounce a couple of times, I rolled the nose under, and I run the nose under the car. I guess it was about 10 laps and it was kind of ill-acting, and all the sudden I went in there and it bottomed out and I hit the wall."

Landers not only hit the wall. He scraped it most of the way around turns one and two before he was able to steer his beaten-up No. 777 back onto the racing surface proper. He took several more laps before calling it a night.

"I just had to pull off. I couldn't ride out there like that," said Landers, who ended up 17th. "I didn't need to tear up more than I already had."

Another flat tire for Dillon

Austin Dillon was hampered by a flat tire in his second straight World 100 start, but the 21-year-old driver from Lewisville, N.C., was able to post his first top-10 finish at Eldora in ninth. The grandson of NASCAR team owner Richard Childress stands fourth in Camping World Truck Series points but is already plotting his next to trip Eldora.

"I had a blast. ... I hope I can come back next year," said Dillon, who set fast time in 2010 before finishing 13th. "I know the Nationwide schedule is what we're working on next year, so it's going to be tough, too. Hopefully I can come back again soon and come here. I love running at Eldora.

"I've had flats twice now in this race. I've gotten in twice, but I've had flats in both of 'em, so I'd really like to see what we'd do with a good tire on there that didn't go flat. I ran over something I think over off of turn two. We really came up through there after we got that tire on there and I thought we were really good. It was a good positive. I'm glad we ended like that.

"It's awesome. Just getting in this race is huge for me. I don't get to run with them every week, and it's just a blast to come out here and run (with) these professional racers. ... the competition level is so good and I'm just glad we got in two years in a row. Hopefully I get to come back again."