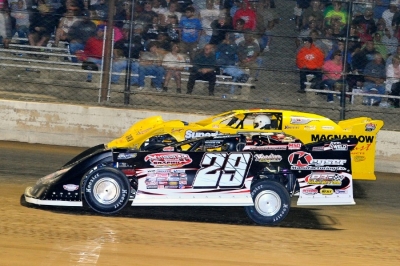 Darrell Lanigan (29) and Don O'Neal battle for second in the final laps. (thesportswire.net)

ROSSBURG, Ohio (Sept. 10) — For most of Saturday's 41st annual World 100 at Eldora Speedway, drivers chasing the dominant car of Jimmy Owens could barely keep the Newport, Tenn., driver in sight. But when Owens began faltering the final 10 laps, his closest pursuers knocked each other out — almost literally — in bids to overtake the struggling leader. | Complete World 100 coverage

Darrell Lanigan, Don O'Neal and finally Eddie Carrier Jr. took credible shots at overtaking the No. 20 of Owens over the final eight laps in Dirt Late Model racing's most prestigious event, but all three fell short, in part because they were so busy battling each other.

"I never seen Jimmy up there really," said O'Neal of Martinsville, Ind. "We got to racing there hard, and I wasn't paying much attention to what was up in front of us, and I looked up there and saw the 20 car and it was like he was coming back to us in a hurry. I was like, 'Wow, we've got a shot at this.' "

No one seemingly had a shot most of the way with Owens taking the lead from polesitter Chris Madden of Gray Court, S.C., on the 13th lap and frequently building leads of a straightaway despite a series of caution periods.

But when a piece of bracing broke on the right side of the leader's car in the late stages at the historic half-mile oval, it hampered his car's handling and made it virtually impossible for him to overtake slower cars. A straightaway advantage at lap 80 was a half-straightaway on lap 90 and gone altogether by lap 92, when Lanigan, of Union, Ky., took his first serious crack at the leader.

Soon O'Neal joined the mix as he and Lanigan made contact at least once virtually every lap the rest of the way, trading the second spot and paint regularly while Carrier came from nowhere to race into contention as the top four cars were suddenly bunched in the closing laps.

The fast-closing Lanigan and O'Neal bumped exiting turn four on lap 98, and Lanigan got such a good run on Owens into turn two he was forced to jump on the brakes, skittering across O'Neal's nose before scraping the wall exiting turn two. The contact slowed both pursuers enough that Carrier slipped underneath on the backstretch to take second with a lap and a half remaining.

Carrier had little time to do anything but plot a final-lap pass, and he gave it his all heading turn three to pull nearly alongside Owens before slowing to avoid contact, allowing Owens to survive the three-car onslaught.

"I was sitting there running and I really wasn't doing all I could do," Carrier said, "then I seen Darrell and Donnie doing what they were doing, and I was like, 'Man, if they keep that up, I need to get up there closer so if they do make a mistake I can get 'em.' Then they did get together coming off of (turn) two and I got to second, and when I got to second, I was like 'Let's do what we can do.'

"I came down the backstretch, and I said, 'Well, I'm going to try to pull one of these (slide jobs) down here.' I thought when I get in here, if I get to the center (of the corner) and I can't see him, I'm going to inch up. I got to the center and I could still see him out there, and I wasn't going to drive through a guy. I know it's the World 100, but I wasn't going to drive through him."

Meanwhile, O'Neal and Lanigan settled for third and fourth, both of them feeling they had cars faster than Owens in the final laps.

"I'd like to have won this thing, but man, what a race. Me and Lanigan got to running hard there. Both of us (traded) slide jobs on each other and cost us both a chance," O'Neal said. "Congratulations to Jimmy he did a helluva job."

Lanigan, looking for his first World 100 victory in his 18th try, said the track conditions required the slide-jobbing passes and "the only way you're going to pass a guy is slide a guy," he said. "But when you're racing O'Neal, you know what you're going to get. That's typical. But it's hard racing."

Six-time race winner Billy Moyer, who dropped out near the midpoint and watched the rest of the race from the infield, saw Owens slip away from drivers desperate to grab the lead.

"Then there at the end when a couple of them guys got to wanting to run over each other made it exciting for the fans to watch I guess," Moyer said, "but there wasn't much respect going on there in my opinion."

Josh Richards of Shinnston, W.Va., who spun with Dale McDowell on lap 82 just after taking the fourth spot from O'Neal, missed the showdown altogether.

Jimmy Owens might, too, because it all happened behind him as he anxiously awaited the checkered flag.

"I was counting laps," he said. "It was the longest race I've had in a while."