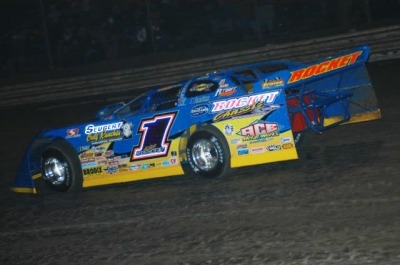 BARBERVILLE, Fla. (Feb. 14) — Josh Richards opened the 2008 World of Outlaws Late Model Series season exactly the same way he did a year ago — with a convincing victory during the Alltel DirtCar Nationals. But the path Kid Rocket took to the checkered flag in Thursday's 50-lapper was decidedly different than in 2007.

A dominant flag-to-flag winner in last year’s tour lidlifter at the D-shaped half-mile, Richards had to battle from start-to-finish to pocket a $10,150 top prize for his seventh career WoO LMS triumph.

“It was a lot harder tonight,” said Richards, who started third but didn’t take over the lead until lap 31 when Shane Clanton of Locust Grove, Ga., retired with mechanical trouble. “I was a nervous wreck the whole race.”

Richards, 19, of Shinnston, W.Va., had just disposed of Newport, Tenn.’s Jimmy Owens for second place and was beginning to bid for the lead when Clanton pulled up lame on the 31st circuit with a broken right-rear axle tube. He went on to build a full straightaway edge before a caution flag on lap 46 wiped it out, but he kept his Rocket Chassis house car solidly in front following the restart.

Even Billy Moyer of Batesville, Ark., who entered the night two-for-two in UMP action at Volusia, was unable to stop Richards’s drive to victory lane. The Dirt Late Model legend restarted on the winner's rear bumper, but he spent the remaining circuits racing for second with Rick Eckert of York, Pa.

Polesitter Jimmy Owens went to the front from the outset and edged away for an easy victory over third-starting Earl Pearson Jr. Fourth-starting Darrell Lanigan, who took third from outside front-row starter Brady Smith on the fourth lap, pressured Pearson late in the race but settled for third. Smith was fourth and Michael England rounded out the top five.

Shane Clanton got a good jump on polesitter Ivedent Lloyd Jr. and fought off a charge from fifth-starting John Blankenship after a lap-four restart to grab the victory. Blankenship, who outdueled second-row starters Jackie Boggs and Josh McGuire in the early laps to move into third, stayed close to Clanton the rest of the way while polesitter Ivedent Lloyd Jr. ended up third.ï¿½ Rick Eckert came up from his eighth starting spot to finish fourth, but he never got within striking distance of Lloyd. The race's lone caution appeared on the fourth lap when Peter Mantha spun in turn four.

Outrunning this week's two-feature winner, Josh Richards started outside the front row and stayed comfortably ahead of Billy Moyer to win. Moyer made a list-ditch challenge on the last lap, but Richards was far enough ahead to take the checkered flag. Richards reversed the finish of last night's feature finish. Further back in third was Billy Decker while Chub Frank couldn't work his way up to challenge for a transfer spot. Darren Miller finished fifth.

Polesitter Terry Casey won the race into the first turn and was never challenged in winning the 10-lapper. Justin Rattliff, who started alongside Casey, was the only diver who could remotely keep up with the winner in cruising to an easy second-place finish. Dan Schieper, back in his Rayburn Race Car after a night in a Wild Chassis, was uncontested in third throughout the race for the final transfer spot. Brian Shirley was fourth as he outdueled Ricky Elliott in the only competitive battle among the top five. Casey won by nearly a full straightaway while Schlieper nearly caught Rattliff at the finish.

A high-running Don O'Neal took the point from polesitter Shannon Babb at the outset and fought off repeated challenges from Babb throughout in nailing down a victory. Steve Francis, who started seventh after a sub-par qualifying effort, edged past a surprising Mike Knight with two laps to go and grabbed the final transfer spot. Knight made a last-lap move to regain the spot on the backstretch, but Francis held on. Dennis Erb Jr., who started third, ended up fifth.

Starting outside the front row, Tim Fuller got the early jump on polesitter Steve Shaver and edged away for a victory. The top two pulled away from the rest of the field while fourth-starting Tim McCreadie held the third spot throughout the race. Eddie Carrier Jr. was fourth and Bart Hartman fifth in the caution-free 10-lapper. Fuller crossed the finish line nearly a half-straightaway ahead of Shaver.

After struggling through most of the Georgia-Florida Speedweeks, Steve Shaver of Vienna, W.Va., put himself in a position for strong performance with a fast qualifying time in World of Outlaws Late Model Series competition at Volusia Speedway Park's Alltel DirtCar Nationals. Shaver posted a time of 16.620 seconds as the fastest among 71 entrants in the WoO season opener at the D-shaped half-mile near Daytona.

Shaver has entered 15 events over the previous three weeks with nine feature starts but not a single top-five finish. He posted sixth-place finishes at East Bay Raceway Park on Feb. 6 and in Monday's Volusia opener. Shaver will start on the pole of Thursday's first heat race after his fast time of 16.620 seconds. Other drivers starting on the pole of heat races, which are lined up straight up according to time trials: Shannon Babb (16.640) of Moweaqua, Ill.; Terry Casey (16.688) of New London, Wis.; Billy Moyer (16.877) of Batesville, Ark.; Ivedent Lloyd Jr. (16.950); and Jimmy Owens (16.966) of Newport, Tenn.

Format changes for the night compared to the previous night's UMP action included standard time trials instead of group qualifying. ... Among drivers making their first Volusia starts of 2008: Bob Geiger of Laurel, Del., and Bart Hartman of Zanesville, Ohio. ... Also making his first start was Michael England of Glasgow, Ky., who has been out of action since his father's Feb. 2 death. His father David died of an apparent heart attack the night before racing action began at East Bay Raceway Park. ... Clint Smith has been shuttling between Atlanta and Volusia throughout the week following the death of his stepfather. Smith attended the Wednesday funeral and made it back to Volusia just in time for racing. ... Scott James of Lawrenceburg, Ind., was back in his regular No. 83 after competing two nights in the Gerstner Plumbing No. 00. ... Andrew Reaume, who flipped his regular No. 88 on the backstretch in Monday's action, fielded fellow Canadian driver Don Gordon's No. 33. ... UMP action returns on Friday with a $10,000-to-win event, and the week wraps up Saturday with a $10,000-to-win WoO event. ... This is the final night of live DirtonDirt.com updates during Georgia-Florida Speedweeks.