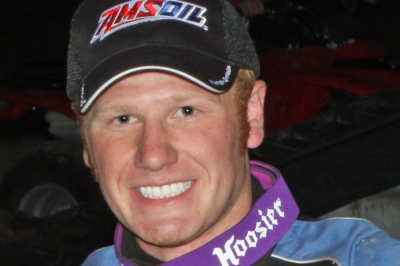 Spatola's surprise as a 13-year-old at seeing No. 89, his long-time go-kart number, pasted on the side of the open-wheel modified was something the Manhattan, Ill., driver will never forget.

"I went to Florida one year with my cousin Sherri (Heckenast), and we came back, and there was just a modified sitting in the shop with my number on it," said Spatola, now 20 years old. "I said, 'What's this?' He just gave his whole program to me. He wanted to get out of racing and do the whole family thing, so he tossed it all down to me and that's how I got started in the modified stuff."

Add to that surprise another one for Spatola. In making the move to the elite Late Model division in 2011, he's finished no worse than third in three of his first four feature events, tabbing him as an up-and-coming driver to watch in dirt racing-rich Illinois.

"Yeah, I'm real surprised. I didn't expect to be able to come out and be this good. I thought it'd take some time," said Spatola, who finished second to Ryan Unzicker on April 3 at Peoria (Ill.) Speedway in the $4,000-to-win Don Bohlander Tribute. "Our goal always was to be this good, and I always said I'm not quitting until I win everything I can, and be the best. I knew I'd get there one day. I just didn't know that I'd start off this good.

"I kind of expected to start off shooting for top-10s, kind of like I did in the modified, and work my way up. But to get top-fives right off the bat, it's a lot more than I expected, or I think anyone else expected."

Spatola's solid start is no promise to a successful season — and plenty of speedbumps are likely against rugged Illinois competition that includes Shannon Babb, Jason Feger, Dennis Erb Jr., Brian Shirley, Kevin Weaver and more — but the better he runs, the better competition he'll seek.

"We don't know for sure yet. We just kind of wanted to see how it'd be the first month here before we made a decision," said Spatola, who drives a royal blue Pierce Race Car powered by a Rhyne Competition Engine. "The original goal was just to stay around home, closest to home and get seat time and learn how to run up front, and then go on the road and learn how to run with those guys.

"But the first three nights out, being able to come close (to winning and) running with them, if we can keep this up and keep running top-fives week-in, week-out, I think we'll try to shoot (for the UMP DIRTcar Summernationals).

"We were already going to shoot to run probably half or three-quarters of the Summernationals. But if we can keep up running as good as we are, I think we'll shoot for running the whole thing."

The redheaded Spatola is a familiar face around Illinois racing for his nickname "Opie," if not for his family connections to long-time racers Frank Heckenast Jr. (his uncle) and cousins Sherri and Frank Jr., a 22-year-old who plans to follow the Lucas Oil Late Model Dirt Series. It was Frank Sr. who hung a nickname on Spatola for his resemblance to Ron Howard's television character from the 1960s.

"When I was real young, my uncle Frank just gave me that nickname and said I looked like Opie Taylor from the Andy Griffith Show. ... It stuck ever since," said Spatola, who was born in 1991. "I've watched one or two reruns before just to see what they're talking about, but that's way before my time."

As a young "Opie," Spatola was successful in go-kart competition during his pre-teen years while Kenny Kasper, a blood cousin adopted by the Spatolas and more than 15 years older than Mike, raced modifieds.

"I'd been in go-karts for five years at that time. We'd raced on the local level, then went to regional, then up to the national level," Spatola said. "We won quite a bit of stuff in go-karts, almost everything you can win. It was time for me to move up. We just didn't know what I was going to do yet.

"At the time, (Kenny had) been married for a few years and he was having his first kid, and he just decided that racing and starting a family was going to be too much for him. He just put a new body on it and put my number on it when I was in Florida, and surprised me when I came home."

After practicing in the car as a 13-year-old, Spatola began racing full-bore at age 14. Over the past five seasons he's racked up 32 feature victories, including a $3,000 triumph last season at Spoon River Speedway in Banner, Ill.

Although he wasn't in the Late Model division, Spatola toured on the Summernationals circuit with his modified, honing his skills on the undercard of the rugged month-long circuit while frequently pitting next to Frank Jr. and rubbing elbows with other Late Models standouts.

"The last two or three years, I've followed the Summernationals with the modifieds, and I love watching the Late Models and I see all the big name Midwest UMP guys — Unzicker, Feger, Shirley — they're always there sliding each other back and forth and racing hard, and I always wondered, 'Man, if I could do that, that'd be awesome.'

"To come out of the box and be able to do it and be able to compete with those guys is pretty awesome. We're just going to keep trying to get better at it every week, and hopefully by the end of the season maybe we can compete with them on a consistent, every-day level — and maybe beat 'em."

Power steering and rear-end problems hampered his car in his Late Model debut at I-55 Raceway in Pevely, Mo., but he rebounded with the runner-up finish at Peoria. A week later he finished third at Farmer City (Ill.) Raceway — behind Shirley and Heckenast Jr. — before posting another runner-up finish to Unzicker at Peoria.

Making the transition to a more powerful race car with wider tires and a different suspension hasn't thrown Spatola off his game.

"I don't think it's a whole lot different. You just kind of get in it and go," Spatola said. "It seems like a Late Model is a lot more forgiving on a driver. I can be a lot less consistent inside the cockpit, and still show consistency on a stopwatch. With a modified, every little movement counts. You've gotta be so consistent and so precise. Late Models, you can slip up once and still be OK.

"You can't go out there and be way inconsistent — good one lap, terrible the next lap — but it's just a lot more forgiving on a driver. Modifieds, if you spin a tire, you're done. A Late Model, you can kind of wheelspin every now and then to rotate the car, and still get away with it.

"The more power, you don't really feel as much because you've got those big tires. A modified you have to be so much smoother. The Late Model, though, the way you race on those, it seems like every lap you're just on kill. You're out there and everyone wants to win and it's all back and forth."

Spatola's older cousin has been impressed — and has often found himself chasing the youngster.

"He's doing a helluva job," Frank Heckenast Jr. said. "I just try to help steer him in the best direction I can."

After Spatola outran Heckenast his opening weekend, "he was after me all week saying he was coming for me. We raced again Friday, and he ended up beating me. So I guess we're even," Spatola said.

"We work together a lot, we like to help each other and we'll do anything to make the other one better, but when we're side-by-side, I don't think there's one of us that wants to let the other one win. We're going to do everything we can to beat each other. We're a real competitive family, that's for sure."

Heckenast has made on-and-off attempts to run portions of the Summernationals, finishing a career-best second in a series event at Fairbury, Ill., in 2009, but if Spatola's success continues he may give it a go. Having followed the Summernationals as a modified driver should give him an edge.

"If I had to go learn how to drive the racetrack and the Late Model, it would've made it a little bit (longer) of a learning curve, I think," Spatola said. "Being on the road and following the Summernationals and being at all the tracks — I've been to 90 percent of the tracks I'm going to go to with the Late Models — and we've had success at quite a few of them. I think that's really going to help me as far as getting into the Late Model."