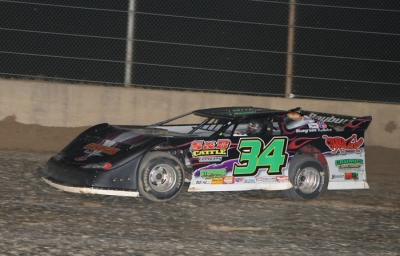 "He had a proven tire," the Winfield, Tenn., cracked after his 20-lap victory in a prelim. The loan came about when Marlar checked with Chris Fox, the crew chief of his long-time friend Owens, during the heat races.

Marlar used his own lugnuts, but he used the wheel and tire from the No. 20 of Owens that helped him to a flag-to-flag victory. "I stayed ahead of 'em," said Marlar, who had a few dicey moments amid lapped traffic before a lap-15 caution. "It was a close call a couple of times."

Marlar wasn't particularly confident at the 3/8-mile oval in southcentral Ohio. "I came here once last year to this race. I didn't make the race and missed it by one spot, and I have no experience here really. So I really don't know, I don't know what's best. I was just sitting there hoping nobody would pass me.

"We got here and we changed (the setup) two or three times already. Because we just don't know. We just threw something at it right there to try and get it to turn a little better, kind of loosening it up compared to how we would normally be, and it ran pretty good."

Marlar wasn't worried about overthinking things. "I'm worried about not trying and losing the race because of a lack of effort. I don't mind. If I try to do something and it bites me in the butt, then I'm OK with that — you just gotta remember to not do it again."

Frank survives on the high side

Although he was in the mix halfway through the fifth heat race, Chub Frank of Bear Lake, Pa., wasn't where he wanted to be — out front. So he stepped it up with a daring high-side charge, slinging past Eddie Carrier Jr. exiting turn four to take the lead and the victory.

A fan walked past Frank's trailer that was parked along a fence lining the pit entrance. The fan grabbed the fence and peered through at Frank: "How many times did you hit the wall?"

Frank struggled with a tight-handling car, but he manhandled it enough to get a victory that helped him get the pole position for Saturday's $50,000-to-win DTWC feature. The six heat winners drew for positions among the first three rows and Frank drew No. 1.

"I thought I was going to hit the wall two or three times," Frank said. "But I figured I'd do something or I was going to run third or fourth, and I couldn't see any reason to do that."

He made a 22nd-to-fifth run at K-C in the 2005 version of the DTWC, and he's interested to see how he'll fare starting closer to the front. "We've had good cars in the past," he said. "but we haven't had good starting positions."

But he's not getting ahead of himself. He knows 100 laps is a long way and that fellow heat winners Jackie Boggs (who starts sixth), Rod Conley (fourth), Jimmy Owens (fifth), Josh Richards (third) and Mike Marlar (second) will be among the tough contenders chasing him.

"They don't pay you until the checkered falls," he said.

After completing his easy-appearing victory in the fourth heat race, Richards detected a strange feeling in his car's steering when he turned the wheel to the left. Moments later, he got back to the pits and discovered a broken left-front A-frame, a key suspension component.

"I don't know what lap it happened on, but it broke," said Richards, who took the lead from polesitter Keith Berner with a first-lap slide job in turn four. "It's a good thing it didn't come the rest of the way off, because it it might've gotten ugly."

The 19-year-old Shinnston, W.Va., driver, who has enjoyed a four-win season on the World of Outlaws Late Model Series, is excited about his chances in the DTWC, a race in which he launched his Late Model career in 2003 by running in a special event for teens.

"I was really comfortable out there. The whole heat race out there I never felt nervous or anything. The car just felt really comfortable," Richards said of his Friday night victory. "I feel really good about tomorrow. Our car, I think, is pretty good. I think we need to adjust it just a little bit more so we can get on a little bit harder tires. We'll just not mess with it a whole lot, and I think we'll be up there."

Jackie Boggs of Grayson, Ky., the son of late Hall of Fame driver Jack Boggs, knows what kind of advice his dad would be giving him: "Don't change too much on the car." It's a lesson the 38-year-old Boggs has continually had to learn throughout his racing career.

"I always went radical with spring changes and stuff, and one of these guys, this guy that worked with the Rocket (Chassis) camp for a while, he said, 'Hey man, chill out so we can tune this car. You're making too many changes for me to tune this car.' "

Now, Boggs tries not to throw too many suspension adjustments at his car all at once. "We just calm it down and tune what we've got," said Boggs, whose strategy helped lead to a victory in the first heat race at the DTWC.

"We've switched shocks and springs and combinations and tires, from Hoosier to American Racer, we've struggled quite a bit," Boggs said. "The biggest thing I've learned is to not overtune the car. What you come with is your best knowledge, and you just tune it all night. We don't really change a bar, we don't change a spring, we just run the same stuff all the time."

The thing is, Boggs' "same stuff" is unique, he says. He's one of the few top-notch drivers driving a chassis built by Audie Swartz and he has his own special tweaks that he's added over the years.

"We've got some stuff on our car that nobody's got, and I know it. We're kinda solo. Swartz calls this the X-4 car. This is something that Jackie Boggs wants, because they think I'm out there anyway."

"Out there" doesn't just mean he's on the edge of suspension-setup sanity. It can also refer to how far ahead he is from the field when leading it, like he was in the sixth heat.

"It seemed to be kind of like old times," Boggs said an hour after his race. "I cut my teeth at this racetrack. I ran the first five years I ever raced here. … It all worked out good for us."

Keith Berner is a racer through and through, but because No. 96F car owner Bill Sweval usually races fewer than 20 times a year, much of Berner's racing outlet is through his shock dyno company, Accu-Force. But the driver from Millersburg, Ohio, figures a good performance on the racetrack — like his second-place run to Josh Richards in the fourth heat at the DTWC — is good for business.

"This was a big step for me, really," Berner said. "It lets people know I still know what's going on."

Berner has made only about 15 starts in 2007, but he's been pretty fast when he races. Entering the DTWC, he'd won three of his past four starts, all at Muskingum County Speedway in Zanesville, Ohio. He proved he's not bad at K-C Raceway, too, a track where he won the 2004 Late Model championship. "This place has been pretty good to me," he said. He hopes it's even better for Saturday's 100-lapper

Will tire choice play a part in 100-lapper?

The DTWC has an open-tire rule that allows drivers to bolt on pretty much anything black and round, but that's not always a factor. Track conditions sometimes simply call for harder tires that can endure 100 laps, but sometimes track conditions might allow some experimenting to see if rubber a bit softer an last the distance and give a driver an edge. How the 27th DTWC turns out remains to be seen.

"I'm kind of looking forward to 100 laps," said Jimmy Owens of Newport, Tenn., winner of the third heat race. "Our car's been good in the 100-lappers, especially when we've been on harder tires. We'll get some hard tires bolted on the thing."

Another heat winner, Josh Richards, agrees. "I'm sure everybody is going to be on (Hoosier) 40s or 1600s or the hard stuff tomorrow night, so I don't think it'll be much of an issue. We'll just have to wait and see."

Sixth heat winner Mike Marlar, though, wasn't so sure. He hasn't competed in a 100-lapper at K-C, but he's wondering if the surface won't allow drivers to try something a little different. "Last year, the tire deal was you could just run some standard old tires," he said. "But we're on some real odd tires, so I think it's going to be a big tire race tomorrow. In these heats, these guys have had everything on."