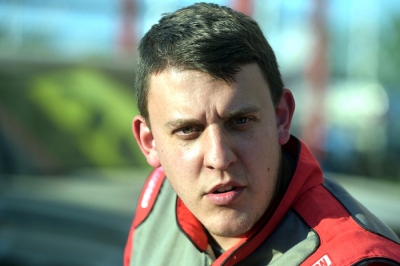 Andrew Kosiski was itching to go racing in May 30’s Malvern Bank Series season opener at Central Missouri Speedway in Warrensburg. His body, however, was overcome by a sickness that left him unable to even climb out of bed in his Omaha, Neb., residence on race day.

By midweek the 29-year-old driver felt even worse and was admitted to an Omaha hospital, where he spent four days and tested positive for Covid-19, the disease caused by the novel coronavirus. He was released on Sunday and is slowly regaining his strength, but he’s unsure when he’ll be able to climb back behind the wheel.

Kosiski, whose father, Joe, is a former standout Dirt Late Model racer and now owns and promotes I-80 Speedway in Greenwood, Neb., entered 2020 with the most ambitious plans of his racing career. While his deal to run selected open-competition Late Model events for Council Bluffs, Iowa-based Getzschman Racing evaporated before he entered a single race, he still had a busy schedule of Malven Bank Series, weekly action at I-80 and an assortment of other specials marked down with his family-owned MB Customs machine.

After racing’s shutdown for the coronavirus pandemic wiped out all of Kosiski’s in March and April, he made his ’20 debut in May 24’s Malvern Bank Series event at Stuart (Iowa) Speedway but had it abbreviated by rain that began to fall during his heat race and washed out the remainder of the show. Just days later his campaign took an unexpected turn when he began developing symptoms of what would be confirmed as Covid-19.

“I started feeling real cold (on May 28), and I had a fever,” Kosiski said. “Then it was like, ‘Well, it might be just the normal flu.’ Then that Saturday morning I was supposed to race (at Central Missouri), I couldn’t get out of bed. It got to the point where I couldn’t breathe very good and Kara (his wife) had to check me in the hospital for a few days with basically every symptom (of Covid-19) you could think of.

“My sister’s a nurse practitioner and she said, ‘Well, you can go (to the hospital) and they might admit you.’ When I got there I was in bad shape. My dehydration was real bad, my blood pressure was down, oxygen was really low. I was like a walking dead person for a day or two.”

Kosiski was treated in a variety of ways while hospitalized, including IVs for his dehydration, oxygen to assist his breathing, blood tests, shots to help prevent blood clots that can be caused by Covid-19 and various medicines. He improved sufficiently to be discharged Sunday, but he continued to feel the disease's effects.

“Now I sleep with an oxygen tank (to continue assisting his breathing) and I still don’t eat very much,” said Kosiski, who slept in until nearly noon on Tuesday. “I’m down 20 pounds and don’t do much but lay around because I get tired so quick. The stomachache’s still around (as well), which is Covid-related, and just being real weak and tired.”

Kosiski can’t be sure exactly where he was infected with the virus, but he believes it might have happened while he was working at his family’s Kosiski Auto Parts.

“I sell car parts, and we’re thinking a retail customer just brought (the virus) in and I must have exchanged money or something,” Kosiski said. “We’ve got work set up good where we got (protective) glass in front of us, to where we really can’t interact very close (with customers), but we still have to exchange money and do things like that.”

According to Kosiski, it appears that he also transmitted Covid-19 to his wife and his mother, both of whom have tested positive. But his wife “didn’t have any symptoms really at all,” and his mother “was pretty sick for three days and then it’s like a miracle rose and she was back outside working in the yard and she’s back to normal.”

“And I’m supposed to be the tough one,” Kosiski added, no doubt shaking his head and smirking at the other end of the phone conversation. “I’m going on almost three weeks of this s--- and I still ain’t cured. I don’t know what it feels like to be a different kind of a sick, like something major, but it’s pretty weird how it’s taken over my whole body.”

Kosiski conceded that his experience with Covid-19 made him rethink his initial conception that it was not much more than the flu.

“Yeah, definitely,” Kosiski said. “And I was a definite non-believer in it, I thought it was a hoax, and I didn’t like it and was tired of it because it was ruining our racing. Well, it got me.”

Nevertheless, Kosiski still thinks “this Covid is not as crazy as it’s made out to be” and doesn’t think everyone should “live in a glass bubble” because of it. But he after being struck as hard as he has been at the age of 29, he certainly suggests people should take precautions to stay as safe as possible.

Kosiski is just hoping that he can soon shed the lingering effects of the virus so he can go racing.

“The doctor I was with in the hospital said, since I was in the actual hospital, what I have to do is wait for all symptoms to be gone and then five days later is when I can probably start doing my normal life,” Kosiski said. “She never told me I had to go retest (for Covid-19), just wait till five days after all symptoms are gone.

“I’m hoping this week is when all symptoms are gone, and then I can go five days and maybe next week I can try to do something.”

Kosiski will unfortunately miss a this week’s three nights of Malvern Bank Series action, beginning Wednesday at Stuart Speedway and continuing Thursday at Hamilton County Speedway in Webster City, Iowa, and Friday at I-80. The tripleheader’s finale at his father’s track is also serving as I-80’s long-awaited 2020 season opener.

Sitting out I-80’s lidlifter will be especially troublesome for Kosiski, but he’s hopeful that he won’t have to skip many more races at the track. He’s certainly looking forward to the July 23-25 Silver Dollar Nationals, I-80’s Lucas Oil Late Model Dirt Series-sanctioned crown jewel that pays $53,000-to-win and, Kosiski said, still has a chance to be contested in its full form.

“They have a bunch of (state and local) guidelines they have to follow (for Friday’s event) and I think they can get 25 percent (spectator capacity) in right now,” Kosiski said. “I think my dad’s hope is to get to 50 or 75 percent (capacity) from the governor by Silver Dollar, and I think at 75 he can for sure make it go, but 50 … it depends on if they’re counting crews and drivers and what they’re counting for where. We’ve got so much room (on the grounds), so it just depends on what they consider what.

“My dad loves racing as much as anybody so he wants (to run) that race as a fan I think more than a freakin’ promoter, so he wants to get it done and he’s trying to figure out how to get it done without losing too much money. But he’s already lost so much from insurance and everything and not being able to race … they put up suites (four plus a new announcer’s and officials’ booth across the top of the grandstand, they’ve done all this other stuff, and they haven’t been able to use anything. They put a lot of money in this winter, and for this to happen …

“I know that the purse (for the Silver Dollar Nationals) was supposed to go way up this year, so he might have to adjust,” he added. “Everybody’s had to adjust (due to the coronavirus crisis), but I don’t know everything and I don’t think he knows everything. I know he’s doing everything he can to get that race in.”

The younger Kosiski, meanwhile, is just waiting for his body to let him get back to the track.

“I know I’ve only missed one (race so far), and I’m gonna miss three more (this week), so have I missed a lot? No,” Kosiski said. “But I can’t do no points racing and that’s a big bummer because that’s where I’ve always done good at. Maybe I’ll have to change and go do some fun stuff like the Show-Me (100 at Lucas Oil Speedway in Wheatland, Mo., on July 18), and we’ve talked about maybe going to Eldora (Speedway in Rossburg, Ohio) because I want to show my wife and my crew guys just what the atmosphere is if they can have fans there (for September’s World 100).

“I just hope I’ll be race-shape by them,” he added. “We’re gonna miss this week too, and hopefully not next week, but who knows?”

“I sell car parts, and we’re thinking a retail customer just brought (the virus) in and I must have exchanged money or something. We’ve got work set up good where we got (protective) glass in front of us, to where we really can’t interact very close (with customers), but we still have to exchange money and do things like that.”