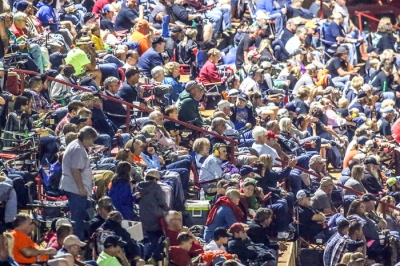 A big crowd at a 2019 Dirt Late Model event. (heathlawsonphotos.com)

As the global coronavirus outbreak has reached pandemic status and begun shutting down sports and entertainment events, travel and universities and schools across the United States, the Dirt Late Model world seems to largely be keeping a wary eye on the situation.

For the moment, at least, Dirt Late Model track promoters and touring series officials are maintaining an even-keeled approach in which they “wait-and-see what happens here the next few days,” said Lucas Oil Late Model Dirt Series director Rick Schwallie, before determining if the spread of the disease will affect upcoming racing events.

“We’ve kept an eye on it a little bit, but the whole complexion of things can change in a couple days,” Schwallie told DirtonDirt.com on Wednesday. “I don’t think it’s there newswise, but it could be by the end of this week or the beginning of next week we’re talking a lot more extensively about it.”

In fact, moments before and shortly after Schwallie spoke with DirtonDirt.com late Wednesday afternoon, the coronavirus story began exploding to a new level with the announcements that this month’s NCAA men’s and women’s basketball tournaments — as well as the NCAA’s upcoming Frozen Four hockey and wrestling championships — will be played without fans in the arenas and the National Basketball Association suspended its season indefinitely after a Utah Jazz player tested positive for coronavirus. NASCAR on Thursday afternoon planned to announced how it would handle upcoming races.

The high-profile developments escalated a health crisis that was earlier Wednesday declared a worldwide pandemic by the World Health Organization and over the past two weeks has seen coronavirus cases in the United States exceed 1,000 even without extensive testing.

Also on Wednesday, Ohio Governor Mike DeWine announced his plans to issue rules ordering there be no large indoor gatherings in the state due to the coronavirus in an effort to reduce the possibility of community-spread of the disease. He did not specify outdoor events, notable because the Lucas Oil Series resumes action on March 20 at Atomic Speedway in Alma, Ohio.

While Atomic promoter Brad McCown expressed no immediate reservations about going on with his Lucas Oil event on schedule when contacted by DirtonDirt.com late Wednesday afternoon, Schwallie, who had not yet talked with McCown, said he would continue to monitor developments.

“I have not spoke to any tracks (this week), other than Florence, Ky., and it was unrelated (to coronavirus concerns),” Schwallie said. “I was just on a phone call with (Florence Speedway promoter) Josh (King) today and we talked about it a little bit briefly.

“I’m keeping up on it definitely. I just feel like it may be a week early, or maybe a couple weeks early, or maybe just a couple days, and the complexion of this can change totally by like Friday. It changes quick. There’s more cases in Ohio today. I think Indiana (where the Lucas Oil Series is scheduled to run on March 21 at Brownstown Speedway) only had one case yesterday and now has 10 — we were just watching the news — so absolutely we’re watching it.

“I have noticed all the way out in Washington, the mayor of Seattle, with all the outbreak they’ve had there, is suggesting that they’re gonna put a ban on any large gathering more than 250 people (including outdoors). We’ve kept a little bit of a pulse on it, but I think it’s just a little bit early. I think over the next few days it’s gonna get more involved here on our plate.”

“We are starting to reach out to promoters to at least have the conversation and to have it on the radar,” Shuman told DirtonDirt.com when asked how World Racing Group, which operates the WoO Late Model and Sprint Car circuits, is handling the situation. “I think it’s still obviously going to be a case-by-case, region-by-region deal. Right now we are planning everything on schedule with no changes but are keeping in contact with promoters for sure.”

Track promoters on the local level are taking a similar tact.

“We’re just keeping up on it like everybody is and monitoring the situation about the spread of the virus,” said Talladega (Ala.) Short Track operator Lynn “Preacher” Phillips, who is scheduled to kick off his track’s regular season March 21 and host the Lucas Oil Series on April 4. “We’ll just play it by ear and just see what all is recommended to shut down and stuff. Most of it’s indoor stuff; I don’t know how it’s going to affect the outdoor arenas, but right now we’re just kind of watching it.

“We're concerned about it,” he added. “People’s health and welfare is No. 1, but we’ll just have to watch it for the next week or so, a couple of weeks, and see what transpires with this stuff.”

Matt Curl, the second-year owner and promoter of Fairbury (Ill.) Speedway, told DirtonDirt.com it is “important not to really panic right now.” But he added the short-track racing community as a whole has to “take this seriously” while “staying calm and understanding the entire situation we’re being dealt by society.”

“For me, I think I have a little bit of an advantage at Fairbury because my season doesn’t start until May 2, so I’ll be able to see what the trends are in the industry,” Curl said. “We don’t have a certainty, but I would anticipate that the opening night would still go off without a hitch right now.”

Curl has reached out to other promoters in dirt racing and even NASCAR to consider ideas and hopes that “with the measures being taken right now (across the country), we’ll see a quicker return back to normal.” But he also believes some in the industry may not realize the significance of the situation.

Curl does note that his concern over the possibility of coronavirus being spread at an outdoor facility like a racetrack with typically 1,500 or so spread over acres and different grandstands is somewhat different than an indoor venue jammed with tens of thousands of spectators. He also mused that racing is fortunate that the outbreak is coming at a relatively slow time for the sport.

“Hopefully what happens outside the dirt track industry can allow us to make some adjustments,” Curl said, adding that “we may not be affected, and we may.”

Kelley Carlton, the director of the Ultimate Southeast Super Late Model Series and other Dirt Late Model events, said he hasn’t really had any track promoters “talk to me or show concern” about the coronavirus outbreak. But with his background in health care — he works for a hospital-based Emergency Medical System — he understands the seriousness of the situation.

“I actually had somebody text me this morning, just a race fan, and he asked me, ‘On a scale of 1-to-10, how concerned are you?’ ” said Carlton, whose Ultimate Southeast tour is scheduled to open its 2020 season Friday at North Georgia Speedway in Chatsworth, Ga. “And my response was a 3, which is, I’m not any more concerned about it than anybody else who has the flu. We treat everybody the same (with coronavirus), you do all the same things as far as isolation precautions and all that.

“I don’t know if we’re gonna see anything really (affecting scheduled Dirt Late Model events) — the risk of being outdoors and getting (coronavirus) is so much reduced. You’re not indoors and enclosed and breathing in droplets and things like that … and contact and droplets is the most common way of getting it.

“Again, my health care side of me comes out,” he continued. “I wish people didn’t need a pandemic outbreak to wash their hands. We actually have a class every year (at his hospital) about how to wash our hands. It’s an important thing, and they require us to use hand sanitizers throughout the day. That’s the most important thing you can do to protect yourself, and don’t be in close quarters with somebody, especially one that has symptoms.”

Carlton acknowledged that the age group most affected by coronavirus does give him reason to pause.

“The people that are the most susceptible to it are obviously the elderly people, and of course, as a race promoter, I do have to worry about that because I know that a large part of our audience is that older generation,” Carlton said. “I worry not necessarily that there’s that much of a concern that they’re going to contract it, but I’m worried that those people think there’s a greater risk so they stay away (from racing). I think that’s the biggest thing that race promoters are worried about currently just because there’s nothing out there right now that being in an open-air arena, if you will, is a problem.”

“We’re just keeping up on it like everybody is and monitoring the situation about the spread of the virus. We’ll just play it by ear and just see what all is recommended to shut down and stuff. Most of it’s indoor stuff; I don’t know how it’s going to affect the outdoor arenas, but right now we’re just kind of watching it.”