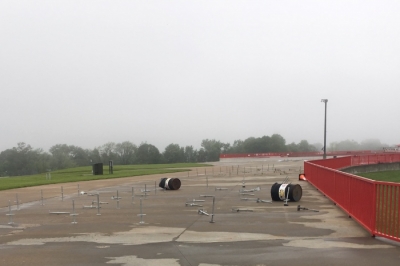 Over the hundreds of thousands of miles that Rick Schwallie has traveled chasing races as a fan, photographer, official and now the director of the Lucas Oil Late Model Dirt Series, he’s never experienced anything quite like what happened to him and a portion of his tour’s staff on Monday night in Wheatland, Mo.

Schwallie, 40, of Batavia, Ohio, and his cohorts were literally in the middle of the savage storm — which might have included a tornado — that swept through the town with a vengeance shortly before midnight, leaving a trail of destruction in its wake at Lucas Oil Speedway that led track and series officials to postpone this weekend’s 27th annual Show-Me 100 activities.

Talking by phone with DirtonDirt.com’s Michael Rigsby on Tuesday afternoon for an interview segment of that evening’s edition of Late Model Live, the tone of Schwallie’s voice expressed just how tired and emotionally drained he was after the harrowing hours he spent in southwestern Missouri.

“We are,” Schwallie responded when Rigsby asked if he and his crew were worn out. “We’ve had a long night.”

Monday had already been a long, long day for Schwallie and six other Lucas Oil Series staffers who were staying together about a half-mile from the racetrack in a house on Forest Lucas’s sprawling ranch that sweeps for miles across the countryside surrounding Lucas Oil Speedway. They had arrived at the residence after Saturday’s rainout of a Lucas Oil Series event scheduled at Deer Creek Speedway in Spring Valley, Minn., and Monday was their “wash day,” as Schwallie termed it, during which they spent hours at the track cleaning up all their haulers and track equipment and prepping it for the upcoming race weekend. By the end of it, Schwallie said his fitness tracker revealed that he had taken 18,000 steps.

“We were exhausted,” Schwallie said. “We came back to the house and laid down for a little while and then we made a late dinner in the house, just made some spaghetti.”

Then, sometime after 11 p.m., as Schwallie and Co. were “unwinding from our day” and “had washers and dryers going in the house,” Schwallie headed down to the home’s finished basement to call his wife, Lucas Oil Series administrative manager and chief scorer Ashley, who had traveled back to the couple’s home in Ohio after Saturday’s rainout and was planning to leave for Wheatland on Wednesday following their daughter Addison’s last day of school. Shortly thereafter the weather began to take a turn for the worst.

“Some of the other staff had came down, and then a couple more of them come down, and said, ‘It’s really getting nasty out there,’ ” Schwallie said. “We wasn’t in the basement two minutes (after that) and we heard loud crashing sounds from the (attached) garage area of the house.”

Parked inside the garage was the Lucas Oil Series pace truck and another company pickup truck because Schwallie and his officials had seen reports of possible storms and thus wanted to keep the vehicles away from potentially damaging hail. The trucks’ location in the garage ended up being precarious as well — although initially, they didn’t know how precarious.

“We knew something was going on, but we never heard no warnings on our phone, no sirens, no nothing,” Schwallie recalled. “We walked up a ramp that comes from the basement to the garage (after the storm’s winds seemed to die down) and we could see that the garage doors were blown out and on top of the one of the pickup trucks that we had in the garage.

“At that point, we thought that was it. We thought, Oh, man, we got a mess on our hands. Then the lightning would happen and you could see that there was a barn outside of the house that we were staying at and the barn’s gone.

“I thought, Oh, wow, the barn’s gone! That was our joke — not really a joke, but just being in shock to one another. ‘The barn’s gone out here!’ Then we come upstairs, and each time the lightning would happen — because it was just pitch-black, no power — you could see more and more. It was just a debris field of stuff out here where we’re staying at.

“It wasn’t long after that people were calling and telling us, ‘We can’t make calls fast enough,’ and our focus turned to the racetrack and being concerned about people being out there. Even the whole time this storm was going on, we were contacting people at the racetrack. We had six race teams I think at the racetrack, and (they were) letting them know, ‘Hey, the bathrooms (in the pit area) are unlocked and they’re designated as tornado shelters so if there’s something serious, go there.’ ”

After clearing debris out from the garage and then driving the four-wheel-drive pace truck through a ditch to get out to the road “because there was a tree down across the driveway,” Schwallie and staffers arrived at the speedway to find paramedics, ambulances and fire trucks on the scene already tending to early-arriving fans on the grounds staying in campers that “were just all tossed about.”

“There were probably anywhere from a dozen to 20 campers on site, and I’d say at least 50 percent of those were either tossed on their sides or completely blown apart,” Schwallie said. “We just drove around the facility (in the pace truck equipped with a light bar) just making sure there weren’t any people still left in any of these vehicles or these campers.

“We checked on the race teams, which we were able to contact most of them via phone. We knew who all were there at the time, and they were all OK. They were probably just as shocked because the immediate pits of the racetrack, where we’re parked at with all our trucks, nothing really happened there. It blew all the trash barrels out of there — the trash barrels were all the way out  on Highway 54 — but when you get to driving around and see the amount of destruction in different areas (of the grounds) …  set of grandstands that sits atop the concrete in turn one, that was almost to turn three in the infield. And then the major destruction was the (covered) grandstands that had been built for the off-road facility (beyond the dirt track pits). It wadded all that up.

“We could see all that with the light bar and driving the truck around, and we’re taking pictures and reporting to our (Lucas Oil) corporate office. There’s so many phone calls that come in at that very moment. Dan Robinson (the facility’s director of racing operations) wasn’t able to be there at that very moment — he was in St. Louis for (longtime NASCAR Truck Series owner) Mike Mittler’s funeral proceedings — so he was trying to make contact, (former Lucas Ol Series director-turned-boss of the Lucas Oil Off-Road Series) Ritchie (Lewis) was trying to make contact, our families are trying to make contact with us.

“This was a very scary moment, but we were looked after and blessed to be safe … and everybody appears to be safe,” he added. “I know they transported a few people from the racetrack (who were hurt in their campers), but from what I understand nothing life-threatening. As bad as as it was for us, I can’t imagine what it would’ve been like in one of them camper trailers.”

When Schwallie returned to the track Tuesday morning, he began looking toward the status of the Show-Me 100 with speedway management. While Schwallie said a local news channel’s early-Tuesday report that the event was already canceled was “not the case at all at that very moment,” it soon became apparent that postponing the race was the right decision.

“It was a matter of just seeing where we were at with the facility and the amount of clean up,” Schwallie said. “And those folks in those campers that lost their vehicles … you just don’t flip a light switch and go out there and clean that up and throw it in a dumpster and host a race. That’s not very respectful. So it’s about them people more than anything. You gotta keep that in mind.”

In addition, with rain falling most of the day on Tuesday, crews would have had a difficult time making a dent in the destruction.

“The biggest concern was, How are they gonna get that set of grandstands torn down and out of the infield?” Schwallie said. “It’s parked in the middle of the racetrack, a mess, so if we can’t get to it because of the rain …

“It just wasn’t in the cards (to race this weekend). We had to back up and punt, as we would say, and move to Plan B.

“And Plan B is really just to buy us some time,” he added. “We’re tired, we’re exhausted, we don’t feel like we’d make sound decisions. The best decision is just to say, ‘Time out, guys.’ We need to come up for air. We’ll circle back to it.”

Schwallie, who said a decision on a new Show-Me 100 weekend date is expected to be made by early next week, concluded his interview with Rigsby by noting that the Lucas Oil Series staff’s spirits were raised by some exciting news that arrived on Tuesday afternoon. Lucas Oil Series technical and former Dirt Late Model standout Steve Francis, who was part of the tour’s staff staying in the house on the ranch, was summoned back to Bowling Green, Ky., by his wife, Amanda, who assists the series with social media and other duties but stayed home because she was in the final weeks of her pregnancy.

“She called a little bit ago and said that it’s time,” Schwallie said. “Steve’s right now en route back to the house. We can’t wait to welcome their baby.”

After hearing the baby news relayed by Schwallie, Rigsby summed up the two days in Wheatland with a classic quote: “Where there is darkness, there is also light.”

And that light came in the form of Steve and Amanda Francis's daughter, Adley Delle, who was born Wednesday at 2:58 a.m. — with Steve there for the delivery.

“And those folks in those campers that lost their vehicles … you just don’t flip a light switch and go out there and clean that up and throw it in a dumpster and host a race. That’s not very respectful. So it’s about them people more than anything. You gotta keep that in mind.”