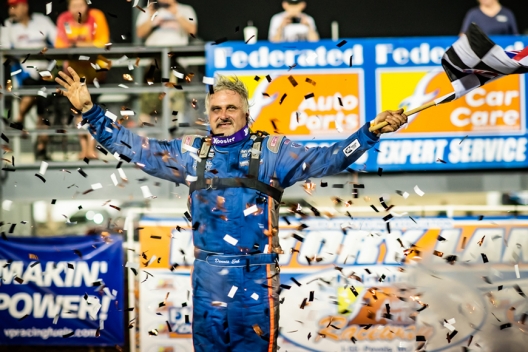 Along with winning for the second straight night at Federated Auto Parts Raceway at I-55 to sweep the inaugural St. Louis Firecracker Faceoff, Erb also pulled the same winning move he did in Friday’s main event.

In Saturday’s 55-lap finale of the World of Outlaws Case Late Model Series/DIRTcar Summer Nationals weekend, the 49-year-old driver from Carpentersville, Ill., driver drove by race-long pacesetter Jason Feger of Bloomington, Ill., for the lead rounding turns three and four on lap 28 and never looked back en route to a $20,000 payday. Combined with his 40-lap triumph on Friday, he left the 3/8-mile, high-banked oval with 30-grand in first-place checks.

Erb went unchallenged over the race’s second half to win back-to-back features, beating Bobby Pierce of Oakwood, Ill., to the finish line by 3.248 seconds. Feger settled for third and leading laps 1-27 off the pole while fifth-place starter Shannon Babb of Moweaqua, Ill., placed fourth and WoO rookie Gordy Gundaker of St. Charles, Mo., completed the top five after starting third.

“We were just riding out there and following (Feger) for a little bit,” said Erb, who started fourth in his XR1 Rocket. “I knew we were starting to get into traffic, and I was trying to watch him and see how he was entering the corner. He just went in there and gave me enough room to sneak up underneath him.”

Erb’s win was his fourth on the WoO tour this season to lead all drivers. It was also his 13th overall career series triumph and his 25th DIRTcar Summer Nationals win.

While Erb was able to move past Feger for the lead early in the race, he was still left with having to maneuver through traffic in the remaining distance. He stated that being aggressive was important considering the caliber of drivers behind him.

“I knew we had a good group behind me there, so there was no time to relax,” Erb said. “We just had to make our marks and watch the cars in front of us. You just really can’t back off because you never know what’s going to happen.”

Erb extended his WoO points lead for the second consecutive night, departing the track 144 points ahead of Max Blair of Centerville, Pa., who finished 11th.

Feger was passed by Pierce for second on lap 46 and finished more than a second behind Pierce’s runner-up machine. He noted he couldn’t get his car to stick to the bottom the way he wanted, allowing Erb and Pierce to overtake him.

“I just felt like I was too tight to keep it down there,” Feger said. “I couldn’t get rotated. I couldn’t, like, enter in on the bottom and get rotated.

“I kind of based everything off of (Friday) night and how the track raced. I thought there’d be enough speed to go there, which there was, but instead of all the lapped cars being on the bottom, they were in the middle. So it just kind of made it hard to pass, and (Pierce) and Dennis could rotate the bottom better than I could.”

The 25-year-old Pierce made his way to second from the eighth starting spot. He snuck by Feger on the bottom late in the feature but didn’t have enough time to catch Erb.

“I was searching a little bit, and the top wasn’t really there like it normally is in the past,” Pierce said. “It’s not even like the bottom had that much moisture. The top was just so slick and crumbly. There wasn’t enough bite up there to really get anything going, so it is what it is.

“But hey, coming from eighth to second, cat-fishing like that and scraping the inside wall, we’ll take it any day.”