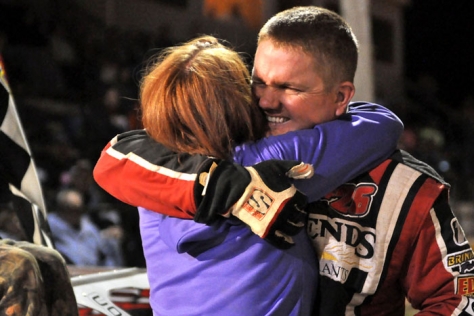 MERIDIAN, Miss. — Josh Putnam’s voice cracked as he talked about losing his close friend Mark Fields. Standing in his hauler in the Whynot Motorsports Park pit area on warm Saturday afternoon, Putnam, of Florence, Ala., had no problem taking a break from smashing springs in preparation for the 27th annual Coors Light Fall Classic later that evening to talk about Fields and the tragedy that unfolded in Lawrenceburg, Tenn., a week earlier.

Fields, a likable 43-year-old racer, husband and father of two, died Oct. 18 at Vanderbilt University Medical Center in Nashville, the result of injuries sustained from multiple gunshot wounds he received five days earlier in a confrontation with a neighbor.

It was a tragic, senseless death. Friends said Fields was out in his yard preparing to help his daughter — a senior in high school — with a homecoming float when, believing his neighbor had shot or shot at his dog, he went around the corner to confront him. Only the neighbor knows exactly was happened next. Reports said the neighbor opened fire on Fields, emptying the gun with the exception of a lone bullet, which he fired at himself. The neighbor, who, like Fields was med-flighted to Vanderbilt, was arrested and charged with second-degree murder while the racing community mourned the loss of one of its own.

Fields wasn’t a national star. He never followed a regional tour. He was a blue collar worker and a blue collar racer, cut from the same fabric as his father Harold “Shorty” Fields, a standout driver in his own right who competed — and won — regularly at those middle Tennessee and north Alabama bullrings. I’m not going to pretend that I knew Mark Fields. I admit that I didn’t know him beyond the casual “hello” while waiting in the payout line at Thunderhill Raceway in Summertown, Tenn. People I’ve spoken with said if you knew him that well, if you knew him well enough to strike up a random conversation after a late night at the races, then you had a friend for life.

“You kind of found somebody who’s a little more than just a racing acquaintance with him,” said Putnam, who has known Mark since before the two were teenagers. “It’s just been a friendship ever since I can remember, that 10 or 12 years old, racing gokarts. If Mark wasn’t at the car races with his daddy, he’d just pop in to the go kart races and everything else. Mark was one of those guys that it didn’t make any difference what was going on, he had a smile on his face.”

Putnam, who lives about 40 miles from Lawrenceburg, recalled how Mark and Shorty helped him acquire his first dirt car. Putnam was about 22 when the Fields duo “basically just give us a car to get started with.” Putnam said Mark was in his corner every step of the way from that day forward.

“He’s probably one of the only people that has always been the guy standing there pushing for me … didn’t make no difference what I’ve done,” Putnam said. “He was for me, like, ‘Go for it, go for it, go for it.’ He’s just always been there. But that was the type of guy Mark was. I think that’s the reason he was so well-liked around the Lawrenceburg area. Which, he could be a smartass, but who can’t? Like I tell everybody, he was a smartass but he could never be an asshole.”

Mark Fields worked as a lineman for the Lawrenceburg Utility System for more than two decades. From the outpouring of support the family has received, both in person and through social media, he was well-liked well beyond the racetrack. Fields regularly attended sporting events at Lawrence County High School where his daughter is a senior on the school’s volleyball team, which participated in the state tournament just a day after his death. Fields was also a member of the Mars Hill United Methodist Church.

Cale Finley, a Crate Late Model racer who also operates his own parts and fabrication business in Athens, Ala., said that it was personality that made Fields so well-liked in the community as well as a fan favorite at his home track.

“Well for one thing, nowadays it seems like racing is so much of a job than what it used to be. It’s not as fun as it used to be,” Finley said. “So when you show up at the racetrack and someone like Mark shows up at your trailer, he’s always got a smile on his face and he’s always excited to be there. It makes you forgot about how hard it was to get to the racetrack that day. It reminds you that you can still have friends and race, and race hard on the racetrack and come back to the trailer. Just like he would always say to everybody, ‘We’re still friends ain’t we?’ It’s gonna be a loss. It’s gonna be a huge ripple in the racing pond. It will be felt everywhere, I think. You never hear anybody say they didn’t like Mark. Everybody he ever met really was friends with him.”

Fields, Putnam and Finley are all within six years of age of each other. But they have a lot more in common. Their fathers — Shorty Fields, Curtis Putnam and Dale Finley — were all successful racers who competed against each other regularly.

“(Mark) was special to me because of Shorty,” Finley said. “His dad and my dad, they raced hundreds of laps together at Thunderhill, Duck River, Winchester. It was always (numbers) 36 and 26. Like I said before on how I got my number. I was at Winchester one night with dad. He was racing. This was before I had started racing and we were working on me a car and I was gonna be number 51. That’s what my football number was.

“Mark was up there and he come over to the trailer and talked to dad and Shorty and all that stuff. I realized then that he just added the F and just became F26. I told dad, I’m gonna do the same thing. Because it was special for Mark and Shorty to have the same number. So I said I wanted it to be just as special for us, so that’s what gave me the idea for me to do what I did (and become F36).”

Everyone who really knew Mark had a story to tell, whether it be his fellow linemen he worked with at the utility company, the guy who did his decal wraps or the dozens of others who left Facebook comments and prayers for Mark’s family. Finley had a story, too.

“Probably my story about Mark would be, we were at Winchester racing one night. I was running two-barrel (Late Model) and he was running Super and they had a big (Super Late Model) race,” Finley recalled. “I don’t remember why or what put him in the back, but he had to start in the back of the feature. Well, he got up on the outside and come all the way to second or third. I was always afraid to run the top at Winchester. I was just starting and I was afraid I was gonna run off the racetrack. I’ll never forget it.

“He told me that you just gotta trust that it will stick. He referred to it like Harry Hogg in (the movie) Days of Thunder. He’s like, it’s just like having a matched set of tires in Days of Thunder. It will work. That particular night was the highest finish I’d ever got. The two-barrel race at Winchester, I got up on the top in the feature and come to fifth. That was something that stuck out in my mind. It’s kinda where we become friends and started talking more when I got old enough to start racing. We had a lot more to relate to then.”

Putnam remembers well the night that Fields captured his one and only Southern All Stars triumph (pictured), a May 7, 2016 victory at Thunderhill worth $4,000. It was the first time Fields was on the track after hooking up with chassis setup consultant Randle Chupp, a former driver whose father Gene Chupp was also a regular competitor in north Alabama, as well as at Thunderhill, later in his career. While that’s certainly a sweet memory, Putnam said one of the best came two seasons again during a trip to Magnolia Motor Speedway in Columbus, Miss.

“We carried his car in my truck and trailer and all I did was help him the whole weekend,” Putnam said. “We didn’t win the race, but we made a lot of improvements on his program and that was what the whole deal was for. Just him and Shorty and all of us staying in the truck like that was probably one of the funnest weekends in I don’t know how long and I wasn’t even racing myself. Just like with my boys, he played with them just like they was his. I’m kind of getting a little bit choked up ... It was like (having) a distant brother, it really was. Just a good guy.”

Putnam said he’s going to miss their conversations, which, believe it or not, weren’t always about racing.

“It’s one of the things like me and Mark might not talk on the phone everyday, but there was a text message, there was something, there was some kind of communication back and forth just daily,” he said. “It probably hasn’t been a month or so when those storms and stuff come through (the Gulf Coast) and he went and worked those storms and he called me on the way home and he said, ‘Maybe I can take just a little bit of a breather now.’ He said, ‘I think we’re going to be able to pay our house off with this little lick.’

“It’s like he was so proud that he had made that accomplishment and stuff. He called me and it was like a minute and a half conversation and it was just about that. It’s just that kind of a relationship. He was just touching to a lot of people.”