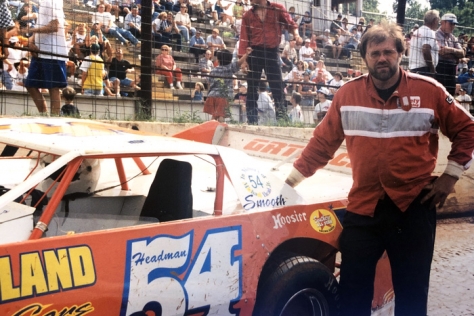 There are a handful of quotes from drivers that stuck with me through the years. Naturally, some of the best have come from the biggest stars, like Scott Bloomquist. But there have been others, more obscure and less publicized, that I won’t likely forget. Mike Head once said that his hot and cold racing fortunes were like going from the outhouse to the penthouse — and vice versa. I remember him saying that in 1993 during driver introductions at Chickasaw Speedway in Okolona, Miss., and for some reason I’ve never forgotten it.

When I heard last week of the passing of the Dirt Late Model Hall of Famer from Ellenwood, Ga., his quip while standing on the Chickasaw frontstretch so many years ago was one my first thoughts.

After reading Kelley Carlton’s excellent blog last week, I thought about how appropriate it really was. It’s hard not to repeat many of the sentiments that Kelley shared or those thoughts we received from the throng of respondents to his column. Head touched a lot of lives. He was undeniably popular among fans back in the day. Unfortunately, for those who’ve just come to love our sport over the last 15 years or so, it may be difficult to understand just how good Head was.

When I think Mike Head, I think determination. I think Southern All Stars. I think about him outrunning Bloomquist and Bob Pierce to win the 1990 North-South 100 at Florence Speedway in Union, Ky., a victory that put Head on the sport’s radar far beyond his Georgia roots. I thought about all the times I snapped his picture in victory lane, the first time I saw his daughter Jamie — who I admit I was quite enamored with — and the two nights I slept in Head’s house.

While I remember much about Head, I have absolutely no idea when or where I first saw him race. It might've been at either of my two home tracks, Winchester (Tenn.) Speedway or Duck River Speedway in Wheel, Tenn., in the mid-1980s when I was in my early teens.

It could've just as easily been at Talladega (Ala.) Short Track around the same time. I started going to the NASCAR races at Talladega Super Speedway in 1983 and didn’t miss a Spring race there for 10 years. It wasn’t until 1989 that TST started hosting Southern All Star events the Saturdays before the spring Winston Cup race — Rex Richey won that first one May 6, 1989 — but that doesn’t mean I hadn’t seen Head earlier.

I know TST hosted spring racing in 1984 the same weekend NASCAR was in action at the big track across the highway. I went to the Friday race. But those races weren't Southern All Star sanctioned at the time. That doesn’t mean that Head wasn’t there. After all, Talladega was among his favorite tracks.

Head claimed six of his 24 Southern All Star victories at TST and had four top-five finishes in the Ice Bowl, the track’s signature event. Along with his 2001 Ice Bowl victory — a race I covered while working at National Dirt Digest — he was the runner-up in the inaugural Ice Bowl in 1991 and later added finishes of fourth and fifth while making nine Ice Bowl appearances.

After the 2001 Ice Bowl, runner-up John Jones of Rock Springs, Ga., had this to say about Head: “We had the fastest car, but they had the fastest driver.” I wonder how many people thought that of Head through the years?

I know that once I became familiar with Head’s iconic orange No. 54, I was always on the lookout for him. As I responded to Kelley’s blog last week, racing was better when Mike Head was there. He always put on a show and I’m not sure anyone in the pit area worked harder to do so.

In 1991 or '92, I went to Boyd’s Speedway for a Tuesday night show and Head was among the dozen or so drivers there racing for $600-to-win. Head had motor trouble during hot laps, but rather than pack it in and get a jump on the two-hour trip back home, Head and his crew of misfits changed the engine in time for the feature. He started last and worked his way into the top five by the end of the race. That’s Mike Head.

I probably wouldn’t have changed a flat tire in the feature for $600. And I dang sure wouldn’t have swapped a motor. I probably instead would’ve headed for IHOP or Cracker Barrel. But not Head. He came to race and he needed to make money, so race he did. It was both laughable — like, who works that hard? — and admirable — like, damn, I wish that I worked that hard — all at the same time.

One time in the mid-’90s, Head headed for the pay window at Duck River. I can remember Head explaining he didn’t want a check, he wanted cash, because there wouldn’t be anyone at any gas station from Tennessee to Georgia who would take the check — and he needed the money to get home. The track exchanged it for him and about an hour later I saw Head fueling up at a gas station just up the road in Shelbyville. I imagine he paid in cash.

In 1992, I went to 411 Motor Speedway in Seymour, Tenn., to watch dirt cars compete on Doug Sopha’s asphalt track. The race couldn’t have paid more than $1,500-to-win. I expected a handful of locals to be there and, naturally, I expected Ronnie Johnson there as well. Johnson was always one of the best at competing on the asphalt in a Dirt Late Model.

I was a little surprised, however, when I walked through the pits and saw Head, four hours from home on a Tuesday night. When I asked him if he was lost, he said that when your tire man — Sopha, then the Hoosier Tire South distributor — calls you and tells you that he needs you at a race, you go. That’s just another example of the type of end-of-the-earth loyalty that Head displayed.

As I got to know Head in the early ’90s, I really became a fan. I can’t say that I pulled for him any more than I did Johnson or Rex Richey or Dale McDowell, but it definitely never bothered me to see him win. There was just something about that big smile that was so welcoming in victory lane. He invited you to talk and you were never turned away. If you could survive his handshake without shying away, you were good.

He was just an open and welcoming guy. When I went to his shop to shoot some photos for a project I was working on in 1993, Head didn’t hesitate to open up his home and offer me a place to stay for the night.

I’ve been to a lot of race shops over the years. I sat on Bloomquist’s front porch for an interview, visited Randle Chupp in Kentucky and went to Jerry Inmon’s home in Mississippi, as well as the Arkansas shops of Bill Frye and Wendell Wallace. Each were gracious. Each went out of their way to make me feel welcome.

But Mike Head opened up his house, took me to dinner, insisted he give me a ride in his big hauler and then told me I could crash in one of the bunk beds in his son Michael’s room. He allowed me to not only see what it was like down at his race shop, but he gave me a glimpse inside his family with Michael, Jamie and his wife Carolyn. When he called me a week later and asked me to come back to reshoot some pics because he’d gotten his truck painted, I couldn't refuse.

After I moved back home and began helping my stepdad's team again, I didn’t get to see Head quite as much. In 1996 we raced against him a time or two. With Bill Mahan of Lacey’s Spring, Ala., driving our family-owned car, we ran seventh in a Southern All Star race Head won June 14, 1996 in Penton, Ala. We also finished one spot behind the ninth-place Head on May 24 that same year at North Alabama Speedway in Tuscumbia, and honestly, Head was holding us up on one-grooved track.

When Childersburg (Ala.) Speedway opened in ’96, we went there one night hoping to pick up an easy win. We’d been there about 30 minutes when I noticed the top of Head’s big orange hauler rolling into the pit area. I knew immediately that Head probably had the same idea we had — and that we’d probably be running for second that night. The race was cancelled because of rough track conditions, but I have a feeling we were going to be chasing that orange No. 54.

It’s a feeling that many drivers had over the years as Head racked up more than 650 victories. He did it with a hard-nosed determination, but always managed a smile. That smile and those easy conversations are what I’ll miss most.