Help for a hero 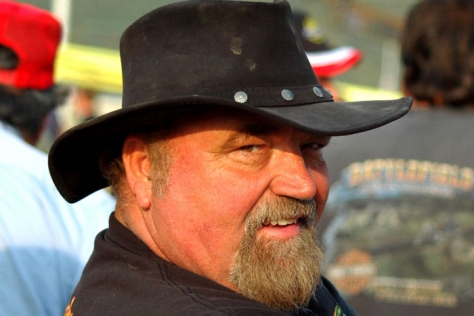 I've told this story before in this space. In fact, I spoke of it in my very first entry here. But in case you missed it, here is an excerpt.

I was probably 8 years old when I went to my first NDRA race in South Carolina. My dad bought me a program from a nice young lady who, judging by her attire, must have come straight to the track from her swimming lessons.

Then I distinctly remembered “hot laps” from that night. There was lots of dirt flying and a lot of noise. And I saw the car with Fred Flintstone painted on the hood — I was immediately a fan.

I must have rooted hard enough, because the ol’ Fred Flinstone car won that race. My night was made complete when my dad took me down on the front straightaway and introduced me to the driver, a big burly man with a black hat. His name was Duvall or something like that. I found out later that my dad knew the guy because he had once driven one of the cars my dad had owned.

So as I grew up and traveled all over with my dad to races, I kept up with Mike Duvall and that No. F1 car tabbed the Flintstone Flyer. I grew to learn about Duvall’s exploits with the NDRA, his teaming with Larry Moore and his prestigious 1982 World 100 victory. As an avid reader of both The Racing News and National Dirt Digest, I knew that Mike had stayed a threat to win everywhere he raced. I was also acutely aware that he was closing in on the 1,000-victory milestone.

Fast forward a few — well maybe more than a few — years. I’m in the flagstand at Sugar Creek Speedway in Buffalo, S.C., on at Friday evening. Duvall had begun to race primarily at tracks local to his Cowpens shop, and on this night Duvall came to Sugar Creek.

After I finished the drivers’ meeting, Duvall walked up to me. I was familiar with his newly found Christian faith and his story of being saved. But Duvall wanted me to know something. He said: “Now son, I have got right with the Lord in my life. I want you to know that I love you in Christ. But I want you to understand that I might not like you later on. But just know if I don’t I still love you.”

He chuckled a bit beneath his ever-present black hat. I did too, albeit nervously.

As I went on from the flagstand to roles as series directors, Duvall has raced with me more times than I can count since that day. He and I would talk about that often. And we would laugh just as hard about it every time.

In addition to his literal big black hat, Duvall has worn many more in the figurative light. He has been a race promoter, a driving instructor, setup teacher and consultant, along with a mentor to many. He has done so much for so many in his lifetime. He is the salt of the earth.

Today, Duvall is in a fight for his life. Struggling with complications of dementia and other medical issues, he has spent much of the last few months in and out of the hospital.

Unfortunately, there have been days when he has struggled with memory loss and other significant issues associated with his condition.

Mike’s wife Pam has taken to Facebook on more than one occasion recently to ask for prayers for the first ballot National Dirt Late Model Hall of Fame inductee. Mike’s medical woes have been quite costly as you can imagine. Duvall’s home track Cherokee Speedway in Gaffney, S.C., recently held a benefit event in his honor with Trent Ivey winning the night’s Late Model feature.

Also friends of the family have established a GoFundMe page to assist with the many medical bills that continue to accumulate. If you would like to donate visit gofundme.com/flintstone-flyer-mike-duvall-fans. You may also send get well cards and wishes to: Mike Duvall, 2089 1/2 Pacolet Highway, Gaffney SC 29340.