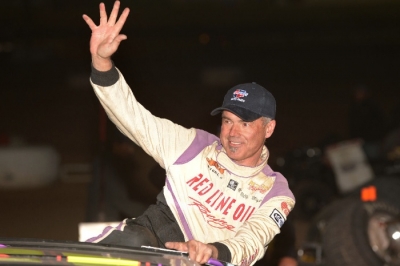 The 55-year-old Hall of Famer from Batesville, Ark., a three-time winner at the six-race Tucson miniseries each of the past two seasons, broke through for his first 2013 victory Saturday. Starting outside the front row, Moyer led all the way in the caution-free 30-lapper, maneuvering through lapped traffic well enough to prevent runner-up Tim Fuller of Watertown, N.Y., from making a serious challenge.

“The lapped cars were a little more hairy tonight than last night, but everything held together and we made it through,” said Moyer, who finished second to Terry Phillips on Friday. “You’ve just gotta bide your time and try to keep the wheels on it going through there, but everything worked out good.

"We had a good starting spot, for sure, and it all worked good. I couldn’t see what was going on behind me there or nothing, but the car felt pretty good — but it can always be a little bit better, so we’ll work on it more for tomorrow.”

Tucson's Winter Extreme finale is scheduled for 1 p.m. Sunday with a $10,000-to-win event for the Super Late Models.

Fuller, who started third, got within a half-straightaway of Moyer near the midway point, and again in the final 10 laps, but Moyer nearly always kept a cushion of lapped cars between him and his pursuers.

“I was faster than the lapped traffic,” Fuller said, “but I just couldn’t clear ‘em, and instead of getting in a crash — I saw Billy have some trouble, too, with lapped traffic — and I really thought I had a shot at him. ... It’d have been neat to see maybe a caution, but whatever. That’s the way it is.”

Whitwell tried to slip under Fuller entering turn one on the final lap, but Fuller shut the door on the driver whose best previous finishes of the week were a pair of fifths.

“I’m real excited. I’m a little camera-shy since I haven’t got up here all week yet. It was a good race. I feel like I should’ve been up here a couple of other nights, but I just missed it a little bit,” said Whitwell, fielding the Mike Tahtinen-owned No. 24. “I think I was still off a little bit tonight, obviously. These two front-runners are really, really fast. I thought I was going fast, but they’re in another league, it seems like. But it’s real exciting to be up here.”

Bagley wasn’t far behind in fourth while Kay was a distant fifth, finishing with part of his rear spoiler missing after Bagley’s lap-10 pass forced him into the turn-four wall.

Fuller, Chris Simpson, Will Vaught, Phillips and Moyer will try to become the week’s only two-time winner in Sunday’s lucrative finale.

“We just hope we get a decent draw tomorrow where we can have a good starting place,” Moyer said. “With 50 laps, if the track’s racy like this tomorrow night, it should be a good race and you can come up through there if you have a good car.”

Notes: Moyer’s Victory Circle Chassis is powered by a Clements Automotive engine and sponsored by L&D Trucking, Henderson Motorsports, Banner Valley Hauling, New Vision Graphics, Sunoco, Ohlins Shocks and Hoosier Tire. ... Thirteen of 24 starters finished on the lead lap and 20 were running at the finish. ... While the event started about 3:30 p.m., two breaks to rework the track surface and several delays required six hours to complete the four-division program. ... The Late Model event was the season’s first for the Colorado-based Championship Dirt Motorsports organization, formerly known as the Championship Late Model Association. ... Don Shaw switched to a backup car for his consolation race, giving up a front-row spot to start on the tail. ... Tyson Turnbull entered the day’s Late Model events but never hit the track; he’d had engine problems in Friday’s event. ... Jason Krohn of Slayton, Minn., won the modified feature, overtaking race-long leader Jake O’Neil on the 20th of 25 laps. Modifieds wrap up the six-race miniseries with a $1,000-to-win race Sunday.