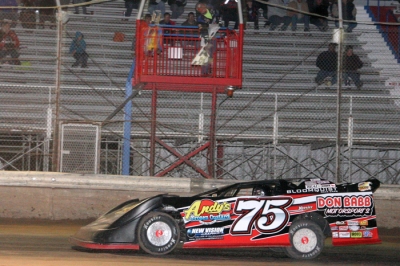 TUCSON, Ariz. (Jan. 18) — Terry Phillips had a comfortable lead midway through Friday’s 30-lap main event at Tucson International Raceway, but it was so comfy about five laps later as Billy Moyer and then Will Vaught closed in on his No. 75.

Battling a flurry of soon-to-be lapped cars, Phillips knew his closest competitors were licking their chops in the fourth round of the six-race Winter Extreme at the 3/8-mile oval. | Complete Arizona coverage

“I had a feeling that I’d slowed up so much for (the slower cars), so it was hard,” said the 46-year-old driver from Springfield, Mo. “I had a chance to split ‘em and did that. I know Moyer and some of them guys, there’s a lot of good racers here, I figured they were breathing all over me, so had to go.”

Phillips sliced through the traffic to get some breathing room, giving him the edge he needed to finish off his 10th career Arizona Late Model victory. Moyer — also a 10-time winner in Arizona over the last 12 years — closed within a few lengths at the finish, but Phillips notched his first Tucson victory since 2010.

“The car was pretty right on the money. We hit it right,” said Phillips, who also credited track prep specialist Tom Campbell. “The track, hat’s off to them, it was just perfect tonight. You had two lanes and sometimes you could go through the middle, so thanks to them.”

Moyer, who won three of six races each of his last two visits to Tucson, settled for a runner-up finish while Vaught, the Crane, Mo., driver who captured Wednesday’s feature, finished third in the caution-free race. Ron Davies of Warren, Pa., who started outside the front row and led the first 10 laps before the third-starting Phillips zipped under him in turn four, was fourth with his son-in-law Shane Clanton of Fayetteville, Ga., rallying from his 22nd starting spot to round out the top five.

Phillips, who made his debut in his Bloomquist Race Car in Tucson last January, was glad to find victory lane in Arizona a year later. He moved into the second spot on the fourth lap, then took advantage when slower cars hampered Davies on the 11th circuit.

“We’ve been working out tails off trying to figure these cars out and stuff, you know,” Phillips said. “These things very seldom ever fall out, you know. They just do a helluva job, the crew here. I’m just the lucky one that gets to drive it.”

Moyer and Vaught appeared to have a chance to overtake Phillips with 10 laps remaining, but couldn’t make a move on him before he sliced between slower cars to rebuild his lead.

“He had to deal with lapped cars too, and I did, too,” said Moyer, who posted his first top-five finish of the week. “We were just trying to, you know, use our heads. It was pretty tough for us to get through there without tearing stuff up.

“We’re gaining. We’re slowing getting toward he front. This is as close as we’ve been, so we’re definitely happy about that. The guys that work on it never give up and keep digging.”

Notes: Terry Phillips drive a Hatfield-powered Bloomquist Race Car sponsored by Andy’s Frozen Custard, Don Babb Motorsports, New Vision Graphics and Integra Racing Shocks. ... Phillips last won at Tucson in Late Model action on Jan. 13, 2010. ... Eleven drivers finished on the lead lap and 18 of 24 starters were running at the finish. ... Polesitter Lance Matthees of Winona, Minn., wasn't a factor after the first few laps and finished 10th. ... Last Sunday's winner Chris Simpson got banged up in his heat race and scratched from his consolation race. ... In the third heat, front-row starters Mike Balcaen and Kyle Beard both fell out with flat tires. Beard left before a lap was complete after contact between the two, then Balcaen dropped out running second. ... David Breazeale, who damaged the powerplant in his regular No. 54 on Wednesday, piloted his car owner Leon Henderson’s No. 10. ... Tony Toste was leading the final heat when he dropped out with a lap and a half remaining. Toste was also leading a consolation race, but a poor restart knocked him from contention and he missed transferring by a single spot. ... New Mexico driver Garrett Alberson entered in a backup car and it, too, was sidelined in a puff of smoke in a consolation race. ... John Kuchar of Henderson, Colo., was the only newcoming driver in the Late Model division. ... Fito Gallardo of Las Cruces, N.M., won the night’s modified feature, earning $1,000 and snapping the three-race win streak of Rodney Sanders, who was fifth.