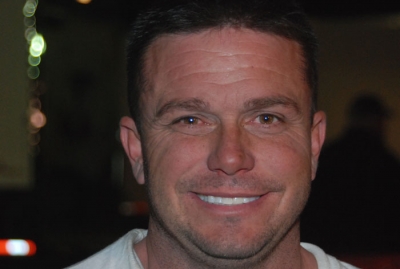 TUCSON, Ariz. (Jan. 14) — Rob Sanders guided his Victory Circle Chassis back into his windowed trailer Friday night in the USA Raceway pits, then let out a sigh. "Those guys are good," said the 35-year-old driver from Bakersfield, Calif.

It's no secret that Dirt Late Model racers from the West Coast are generally a step or two behind more prolific drivers from 2,000 miles to the East, but Sanders received a clear-cut reminder in Friday's 30-lap Wild West Shootout feature.

The first Californian to start on the front row of a main event during the six-race series, Sanders simply couldn't hang with stronger Midwesterners and Southerners at the front of the pack, least of all Hall of Fame driver Billy Moyer of Batesville, Ark., who raced to his second straight Tucson victory.

Moyer ended up passing Sanders twice — early in the race, then again when lapping him in the feature's late stages. Each time the 53-year-old driver went past, Sanders marveled at how Moyer's similar Victory Circle Chassis gained so much more traction.

"Those guys were leaving me on the (corner) exits. I didn't have the bite those guys have," Sanders said. "Moyer's in the corners like he's on a rail. You try to do what they're doing and ... you know, when you're coming off the you've got the car bowed off, and it's pinched over on the right front, I just can't get the drive off.

"I didn't have the drive that they had. I wish I could've done a couple of different things with my shocks You get those guys that run professionally — every day pretty much during the season — it's pretty difficult."

But don't expect Sanders to give up. Sanders, who runs construction and pipe companies, can't think of better way to spend a week, and watching one of Dirt Late Model racing's best drivers leave him in the dust isn't discouraging.

"You've got Moyer with 700-umpteen wins — and I've got one," said Sanders, whose lone Late Model victory came in 2008 at Victorville (Calif.) Auto Raceway's Turkey Classic. "I've only been racing for 10 years, and only been in a Late Model for five. He's been in it 30 or 40 years or whatever it's been.

"I never get discouraged. I'm an upbeat person. It doesn't matter what happens out here, I'll leave with a smile on my face regardless of what happens. The engine blows, it's racing. I really enjoy it, hanging out with my friends. That's the most important thing."

While Sanders doesn't have a crew like some teams — only his girlfriend Brooke Pelzer came along — he's pitted next to fellow Bakersfield driver John Lowrey just in case.

"If I get in a jam, these guys over here will jump on this car as fast as they can," Sanders said. "Whatever I need, I've got guys that'll jump on it. But 99 percent of the time, I'm doing everything myself, and I like that. If something goes wrong, it's my fault, it wasn't somebody else who forgot something, or something like that. I enjoy doing things myself. I enjoy getting all greasy. That's half of it for me."

Sanders has posted a best finish of 12th at Tucson last Sunday, and he hopes to tune his Victory Circle Chassis better with plenty of like-minded drivers in the pits driving the same Bakersfield-based chassis. Chris Sivesind of Victory Circle, who helped design the chassis, is also around to lend a hand.

"I can usually bounce ideas of him," Sanders said. He looks at the car and he gives you what he thinks you might need to do ... he keeps us pretty close all the time. Which is really good, because you want to be a close. You've just gotta get on the track to see if you can make it better or not."

And Sanders even got to rub elbows with Moyer, who popularized the Victory Circle brand in the East with two 20-victory seasons over the past three years.

"Moyer comes around all the time ... (we) went to lunch this morning with him," Sanders said. "He'll chat you up. He'll talk to you if you ask him a question, he'll talk to you about it. If you own a VC, you can go over and look at his car or whatever you need to do. This is actually the same model as (Billy Moyer Jr.'s) car. Moyer Sr. has the (2011) which has the new front end on it ... this front end is a little different. This one's the same as the Junior car, so I watch Junior's car to see what he's doing."

Little by little, Sanders hopes he can get as fast as the Moyers, both of whom have captured features during the weeklong miniseries.

"The car wasn't half bad, it's just those guys are better," Sanders said. "You've just gotta try to catch up."

Correction: Fixes that Chris Sivesind has returned to work at Victory Circle.