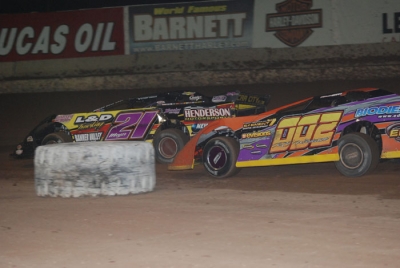 TUCSON, Ariz. (Jan. 12) — When race-long leader Ray Moore got hung up in traffic on the 17th lap Wednesday at USA Raceway, second-running R.C. Whitwell saw the opportunity to make his move. But third-running Billy Moyer beat him to it. | Complete WWS coverage

With Whitwell venturing outside Moore in turn three, Moyer scooted past both cars on the inside and took a lead he'd never give up in the third round of the Wild West Shootout. Moyer, the 53-year-old Hall of Famer from Batesville, Ark., who won three miniseries races last year, earned $3,000 for the 30-lap triumph.

"We just made the right (moves) with some of those lapped cars, and had some luck on our side getting through there," the seventh-starting Moyer said after joining his son Billy Jr. as a winter winner in Arizona. "We sure didn't have the best car right there tonight."

Whitwell, a hometown standout in the modified division, took a few more cracks at Moyer in the closing laps before settling for the runner-up spot, the same position he finished Sunday at the 3/8-mile oval. Terry Phillips of Springfield, Mo., gained three spots to finish third followed by Bub McCool of Vicksburg, Miss., who survived a first-lap scramble and rallied from his 18th starting spot for this third top-five miniseries finish.

Moore, the Haughton, La., driver who started outside the front row and led 16 laps, rounded out the top five finishers as the six-race Wild West Shootout reached the halfway point.

The miniseries takes its final break Thursday before returning for another nighttime event at 7 p.m. Friday. Saturday and Sunday's events start at 1 p.m. with the Bill Cheesbourg Memorial finale paying $10,000 to the winner.

In Wednesday's feature, Moore edged polesitter and Tucson native Jeremy Payne on the first lap and set sail while Payne faded from contention. Whitwell took up the chase with Phillips in third, and when Moore got into turn one too high on the eighth lap, Whitwell got underneath the leader exiting turn two.

But a slowing Billy Moyer Jr. brought out a yellow flag that negated Whitwell's move, and Moyer got past Phillips on the restart and began tracking the lead duo of Moore and Whitwell.

Moore was in command at the halfway point, but the slower car of Darryn Waldo running the inside groove gave him problems as he tried to find a way past. When the leaders entered turn three on the 17th lap, Moore was suddenly flanked by Whitwell on the outside and Moyer on the inside as he hoped Waldo would make a mistake.

I was just hoping that he would slip up the track just a little bit and let me get under him," Moore said. "but he never did."

Whitwell hoped to be the one to take advantage of Moore's struggles with traffic, but he couldn't beat Moyer to the front.

"The first time (Moore) got bottled up, I decided after following those guys for a while, I decided to go to the high side," Whitwell said. "But at the same time I did that, the 21 went by me at the same time. He had the same idea. I was just playing catch up (after that).

With Moore dropping from contention, Whitwell took up the chase of Moyer and stayed within striking distance. A pack of slower cars hampered Moyer on lap 25, but he cleared them to get some breathing room. Again on the final lap Whitwell drew close enough to take a shot at the lead, but Moyer held him off at the checkers.

"My car was decent — kind of inconsistent — if I could be more consistent I could be a lot better," Whitwell said. "At times (he) left the door open and I'd try to get under him. That last lap, I almost took us out. It was pretty close. A lot of fun racing."

Notes: Moyer's Victory Circle Chassis has a Clements Racing Engine and sponsorship from L&D Trucking, Henderson Motorsports, Banner Valley Hauling and Minx Show Palace. ... Leon Henderson, one of Moyer's primary sponsors, started third but faded to a 12th-place finish. ... Terry Phillips, the winningest driver in Wild West Shootout history, posted his best finish of 2011 after struggling the opening weekend. ... Bub McCool is the only driver with three top-five finishes. ... The race was slowed by two cautions, the first for a scramble in turns one and two among several cars that knocked David Breazeale, Paul Mueller and Eric Mass out of the race.

Outside front-row starter Chris Wall cruised to a victory in the final consolation. Bub McCool took the second spot from polesitter John Lobb on the ninth lap while Lobb and Trevor Glaser claimed the final transfer spots. Russ Sell's No. 50 rolled into the turn-three wall and ended up on his wheels; he wasn't injured.

Polesitter Brad Looney started on the pole and cruised to a 12-lap victory in the caution-free affair. Billy Moyer Jr., who started fifth, quickly got to the second spot and held it the rest of the way while David Breazeale was third. Pat Doar, who nearly slid into the wall between turns three and four early in the race, got the fourth and final transfer spot.

Polesitter Frank Heckenast Jr. cruised to an easy victory, far outdistancing fellow front-row starter Eric Mass. Brant Kehrer got the third spot while Clay Daly was the final driver transferring to the main event after a contentious battle for the fourth spot. Rob Mayea held the spot most of the way, but he and Rob Sanders banged together on the frontstretch of the eighth lap, sending Sanders briefly into the infield and out of contention. Sanders attempted to get back on the track in turn one but he clipped a tire barrier and lost the left-front portion of his car's nosepiece. On the restart, Daly briefly took the fourth spot from Mayea, but Mayea went back ahead until Daly made an outside move off turn two on the final lap to take the position. Mayea ended up banging his No. 37 into the backstretch wall.

Polesitter Terry Phillips jumped to the early lead and was never challenged in staying on the point throughout the eight-lapper. Fellow front-row starter Frank Heckenast Jr. lost ground on the start but gathered up his car to track down Phillips midway through the race. Heckenast finished about a half-dozen lengths back while Brant Kehrer was another straightaway behind in third. No cautions slowed the action.

Polesitter Ray Moore built a straightaway lead after two laps and cruised to an easy victory in the fourth heat. Jon Kirby had a couple of shaky laps early but settled down to hold the spot over Trevor Glaser midway through the race. Eighth-starting R.C. Whitwell looked as good as anyone in the heats, rallying up to catch Glaser and grab the third spot in the final laps. Glaser ended up fourth. Jimmy Mars, a two-time winner last year at Tucson, never made it to the track; he had thrust bearing problems with a new engine and doesn't plan to run a consolation race.

Polesitter Billy Moyer's third-lap slide job of fellow front-row starter Jesse Stovall led to an easy victory in the caution-free eight-lapper. Stovall got the jump at the outset, but Moyer stalked him in the early laps before sliding past. Second-row starters Chris Wall and Pat Doar had a tight battle for the third spot throughout with Wall getting the position at the finish. Tail-starting Brad Looney advanced to finish fourth.

On a fast racetrack, polesitter Jeremy Payne sped to victory over fellow front-row starter. David Breazeale joined the top two for a three-car breakaway and finished in the third spot. Tony Toste ran in the fourth spot most of the way, but he slowed on the backstretch on the final lap and gave up three spots. Billy Moyer Jr., winner of Saturday's feature, didn't make much progress in finishing sixth.

Polesitter Leon Henderson, best new as a sponsor for Billy Moyer's team, scored a solid victory in the eighth-lapper, holding off Ronny Lee Hollingsworth. Montana's Darryn Waldo made a quick move from his sixth starting spot up to third, and he finished in that spot over Chad Ruhlman, subbing for Dick Barton in a Kennedy Motorsports entry. Clay Daly was fifth. Newcomer Scott Green took on slow lap and pulled to the infield in the caution-free affair.

The event marks the first nighttime race of this year's miniseries; the weekend action has started at 1 p.m. ... Among newcomers on hand in the Late Model division are Scott Green of Bennington, Neb.; Jess Anderson of Gillette, Wyo., and Paul Mueller of Bismarck, N.D. ... Mueller blew a motor in Friday's practice and didn't compete over the weekend. ... Anderson is driver the No. H20, a car Jimmy Mars raced to victory at Central Arizona Raceway's Wild West Shootout action in 2008. ... Another newcomer is Chad Ruhlman of Bemus Point, N.Y., who will drive the No. 1B Kennedy Motorsports car driving over the weekend by Dick Barton. Ruhlman, the team manager, is expected to make occasional starts for the team in 2011. ... Bub McCool, who had a pair of top-five finishes over the weekend, got into the turn-three wall during hot laps. His No. 57j appeared to suffer relatively minor damage. ... The only other division in action are modifieds.