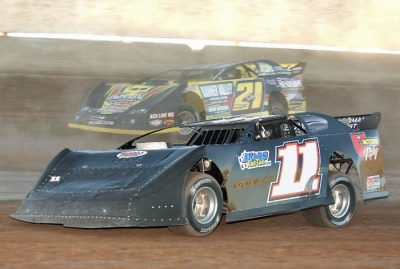 TUCSON, Ariz. (Jan. 9) — Winning his first Arizona miniseries race in eight years, Pat Doar of New Richmond, Wis., led the final 11 laps Sunday afternoon at USA Raceway for a dramatic $5,000 victory in the second round of the Wild West Shootout.

The third-starting Doar botched a lap-22 restart to briefly give up the lead in turn two, but he roared down the backstretch and pulled off a thrilling turn-three slide job to regain the point from home-state driver and polesitter R.C. Whitwell. | Complete WWS coverage

"I stuffed it in there too straight and hit that hole, and started bouncing. Before I knew it, two of 'em went by me," said the 47-year-old Doar, whose previous Arizona victory came Jan. 23, 2003, at Central Arizona Raceway in Casa Grande. "But then I just drove it in the middle, and my car stuck — to my surprise. I mean, my car was really good, but I think Whitwell, he must not have gotten into (turn) three as good as he had been."

Whitwell settled for second in the 30-lapper, a half-straightaway back at the finish while Bub McCool of Vicksburg, Miss., survived a scrape on a late restart to finish third. Father-and-son Billy Moyer, who started 21st, and Billy Moyer Jr., winner of Saturday's opener, rounded out the top five finishers.

It was a rough night for the Springfield, Mo.-based Terry Phillips Motorsports cars of Phillips and Jeremy Payne, a Tucson native who finished second Saturday. Phillips led laps 2-19, but slid high exiting turn two after lapping a slower car and got into the backstretch wall, giving up the lead. Payne was running third on a lap-27 restart when McCool made contact from behind, sending Payne's No. 74 spinning into turn one.

Brad Looney took the lead from outside the front row at the start, but after Doar nosed ahead briefly, the fifth-starting Phillips quickly took command on the second lap as Whitwell and Doar gave chase.

After the high-running Doar nearly drove around Phillips just before a lap-seven yellow, all the frontrunners jumped to the high groove on the restart and the top three of Phillips, Whitwell and Doar pulled away from the field.

When Phillips faced the slower car of Brad Williams on the 20th lap, he drove underneath Williams in turn one. But when his No. 75 skittered high in turn two, Phillips couldn't keep it off the backstretch wall, allowing Doar and Whitwell to blow past, with Doar holding the lead at the flagstand. Phillips limped to the infield.

Doar restarted alone out front on lap 23 with everyone double-filed behind him, but he pushed high in turn one, jumping the cushion and allowing Whitwell to go by and Payne to pull alongside. But Doar quickly regained his momentum, drove hard into turn three below Whitwell and slid back into the lead in turn four.

Two more single-file restarts — including one after Payne's demise — were uneventful as Doar grabbed his first victory at Tucson since a triumph in the modified division at last year's Wild West Shootout.

The race was slowed by five cautions, all for single-car incidents except Payne's spin. Looney had a lap-seven flat tire and Ronny Lee Hollingsworth slowed on lap 12 and headed pitside. Clay Daly slowed with a shredded right-rear tire on lap 22 and David Breazeale broke his right-front suspension on lap 27.

Drivers take a two-day break before returning to action 7 p.m. Wednesday for the third round of the six-race miniseries. The 30-lap main event, the first of two nighttime races this year at Tucson, pays $3,000 to the winner.

Notes: Doar's M-B2 Customs chassis is sponsored by Mars Race Cars, U Motors, Speedwerx, jimmoe.com, S&S Transport and Pro Power. ... Doar was a two-time winner in 2003 at Central Arizona Raceway, when the miniseries was called the Early Thaw. ... R.C. Whitwell's runner-up finish was the best for an Arizona-based driver on the series. ... Jack Sullivan of Greenbrier, Ark., advanced 18 positions to finish sixth. ... Late Model rookie Morgan Bagley of Longview, Texas, advanced from 13th to sixth before getting a piece of Jeremy Payne's lap-27 spin, knocking him out of the race. ... Bub McCool and Billy Moyer Jr. are the only drivers to post top-five finishes in the first two races on the six-race miniseries.

In a thriller with the top five running in a tight pack most of the way, newcomer David Breazeale slipped by a traffic-hampered Rob Sanders on the last lap for the victory. Sanders broke away from the pack on the ninth of 12 laps, but Breazeale took advantage when a slower car broke Sanders's momentum in turn one. Billy Moyer and Jack Sullivan were a close third and fourth while Eric Mass slipped up late and finished fifth, missing a transfer spot in the caution-free affair.

Nick Bartels regained the lead from fourth-starting Brad Williams with two laps remainingt to capture the second consy. Williams held onto second, finishing just ahead of New York teammates John Lobb and Dick Barton. Outside front-row starter Chris Wall lost power on the first lap and coasted to the infield. The lone caution appeared on the fourth lap when Leon Henderson, Russ Sell and Bill Bartels tangled in turn three.

Polesitter Morgan Bagley won a race-long duel with fifth-starting Mike Johnson, slipping ahead for the final time on the final lap in the 12-lapper. Both drivers transfer to the main event along with third-finishing Jesse Stovall. John Kaanta, in a distant fourth, also transfers.

Polesitter Ronny Lee Hollingsworth rolled to an easy victory in his Texas-based Flynn Motorsports machine, leading all eight laps. Fourth-starting Pat Doar took a while to get rolling, but the high-running Wisconsin driver took second from Nick Bartels on the fifth lap and made up some ground on Hollingsworth the final three laps, although he still finished more than a half-straightaway behind. Bartels was third and Mike McCaughan a distant fourth.

Polesitter Jimmy Mars won a back-and-forth duel with fellow front-row starter Chris Wall, taking the lead for good on the fourth lap as Wall jumped the turn-one cushion. Wall finished nearly a straightaway back in second with Rob Sanders another straightaway back in third. Newcomer David Breazeale was a distant fourth.

R.C. Whitwell made a high-side move on polesitter Brad Williams on the third lap and pulled away for a victory. Whitwell, who looked good Saturday but got into the backstretch wall, didn't have any problems in Sunday's heat in winning by more than a straightaway. Dick Barton also went around Williams on the sixth lap, while Williams settled for third. Tail-starting Dylan Smith made a late charge for fourth.

Saturday's feature winner Billy Moyer Jr. won from the outside the front row, barely holding off runner-up Terry Phillips, who rebounded from his struggles yesterday afternoon. Phillips slipped underneath the race-long leader entering turn three on the final lap, but Moyer Jr.'s high line gave him enough momentum to sweep back ahead by inches at the line. Those two pulled away from the field while Jeremy Payne — who tangled with Billy Moyer in turn four on the third lap — was third. Polesitter Darryn Waldo struggled from the outset, droppping all the way back to eighth after one lap.

Third-starting Brad Looney slipped under polesitter Leon Henderson early in the race and race to an eight-lap victory. Eighth-starting Bub McCool rallied for a solid with Clay Daly just behind in third. Henderson was fourth. Dave Deetz spun on the first lap to draw the prelim's lone caution. John Lowrey started on the tail and was hampered part of the race when his nosepiece got folded under his car.

Billy Moyer Jr. of Batesville, Ark., winner of Saturday's opener, is among 52 drivers entered in the popular winter event that has attracted drivers from 17 states and Canada. ... Six heat races are scheduled with a passing-points system transferring drivers to the 24-car feature event. ... Three newcomers are in action. Jon Kirby of Russellville, Ark., is debuting a Bill Frye Motorsports Rocket Chassis. Two other drivers, Mississippians Leon Henderson and David Breazeale of Henderson Motorsports, were late arrivals after their hauler had fuel filter problems en route to Arizona. ... Three other divisions are in action: hornets, super stocks and modifieds. ... Announcer Chris Stepan is streaming his live audio from Tucson at Ustream.