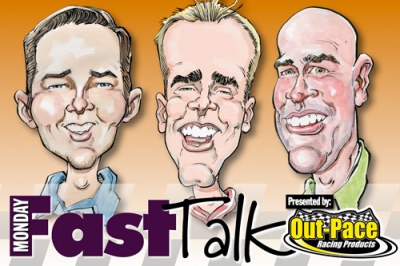 Todd Turner: Did anyone else have a little deja vu when Ryan Gustin, on his way to his biggest career victory, made contact with a slower car in Sunday’s Winter Extreme finale at Tucson International Raceway?

Gustin famously wrecked himself last summer at I-80 Speedway’s Silver Dollar Nationals after a 34th-to-first charge, knocking him from contention. This time, the Marshalltown, Iowa, driver survived to collect $10,000 in the National Dirt Racing League finale at Tucson. A great ending to the week for the second-year Late Model driver who was in contention during each of the final weekend’s three features. And a great start to 2014 for last year’s consensus Rookie of the Year, wasn't it?

Ben Shelton: Not only did it most definitely remind me of Gustin's miscue at the Silver Dollar Nationals, but he also told me in the postrace interview that it was the first thing that shot into his head. He went as far as to say he was shocked once he realized there was no real damage.

Gustin has been beyond dominant in the top tier of open-wheel modified racing for the past several years, and he has hit the ground running already in the Super Late Model ranks. It's refreshing to see new drivers like him coming into our sport. I love watching him race, and his enthusiasm is a breath of fresh air to Dirt Late Model racing.

Andy Savary: Say what you want about Ryan Gustin, but boy does he know how to make a race entertaining and he is quickly becoming a fan favorite because of it. It turns out last year’s Silver Dollar Nationals chaos was only the beginning and yes, he almost duplicated some of it on Sunday.

Gustin turned in a weekend full of late-race rallies that eventually culminated in a field-stomping victory on Sunday. I feel like we need a Twitter hashtag to warn the racing community that, “OH MY GOSH, RYAN GUSTIN IS DOING THINGS!!!” because the platform goes absolutely wild in support of him when these moments occur. I suggest #OMGustin, but if you have a better one, tweet it to @DirtonDirt and we can discuss.

TT: While Gustin had a high-profile week, veteran Jimmy Mars perhaps had the best week among more than 60 entrants overall with five top-five finishes in six starts, including a $5,000 victory Saturday that marked just his second Late Model victory in 16 months. It was clear during his 2013’s struggles that the Menomonie, Wis., driver had lost confidence, so this should help get him on track, shouldn’t it?

AS: When he parked in victory lane on Saturday night, his newly-restored confidence sure made it seem like he had officially turned the page on a lousy 2013 season. To put it simply, Dirt Late Model racing is a better place when Jimmy Mars is good. Mars is not only one of the best drivers in the sport, but also one of the most respected. As you noted, he was the most consistent driver in desert, and it's good to see him get off to such a sparkling start in Tucson.

TT: Mars publicly shrugged Brian Birkhofer's departure from MB Customs during the off-season, but I'm not so sure proving the chassis is capable won't spur him a bit this season.

BS: I know we are supposed to be impartial to accomplishments by drivers, but I'll fully admit I was thrilled to see Mars win Saturday night. He's a true good guy of the sport, and he's really been way down the past year or so. You could just tell that his win as well as his other performances this week have energized him once again. Obviously this was just six races at one track, but I think this could be a bounce back year for Mars. A.J. Diemel looked very impressive in his MB Customs car, as well.

TT: Let’s talk about some of the other “winners” during the week. New Winter Extreme sanctioning body NDRL (the national tour that marked the first anniversary of its announcement)? Moyer Xtreme by Longhorn with two victories? Nighttime races vs. daytime races as the middle events of the six-race miniseries went down to the last lap? Format-fiddling? Your thoughts, or chime in with your own pick.

AS: The NDRL and Longhorn Chassis both surely have to be happy with the kickoffs to their respective 2014 seasons, but my biggest winner(s) for the miniseries are the West Coast racers. While West Coasters have turned in some solid performances in the past, January events in the desert have been mostly dominated by national invaders in recent seasons. That seemed to change a bit this year.

Tucson’s own R.C. Whitwell kicked things off in grand style with the first-ever home-state victory for Arizona on opening night, and the West Coast never stopped rolling. Tony Toste (runner-up), Clay Daly (fourth) and Whitwell (fifth) each notched top-five finishes on the second night and just a few days later Whitwell was on cruise control late in the race when he lost another likely victory to mechanical gremlins. Additionally, Garrett Alberson, Jason Papich, Rob Sanders and Joey Moriarty each qualified for multiple main events, something that is no easy feat amongst this caliber of competition. Tucson had some serious West Coast flavor this year and that crop of drivers proved that they deserve more respect.

TT: We should probably mention Chase Junghans with some nice showings, too. The Manhattan, Kan., driver debuting a Capital Race Car made only half the six feature fields, but a third-place finish among that competition is worthy.

BS: While crowds have always been a struggle at Tucson during the Winter Extreme, I saw some really nice ones this week including possibly the biggest crowd ever for the event during Saturday's festivities. The NDRL did a real nice job with promoting the event in the area and on social media.

The performance by the Moyers in their new Longhorns may have been hit and miss at times, but they were definitely better than I expected out of the box. Both drivers seemed encouraged about their potential for this season.

On a final note, I wasn't overly thrilled about starting the events a little later than in the past, but it worked out with night shows that presented some really good racing.

TT: Likewise, let’s consider who had a rough week. First, there’s Terry Phillips, who wrecked contending in one feature, then fell by the wayside from another while leading. Also William Thomas (failed to make a feature)? Max Blair (mostly off the radar in Kennedy Motorsports debut)? Will Vaught (a winner last year who was a non-factor after a third-place finish in the opener)? The format-fiddlers? Your thoughts, or chime in with your own pick.

AS: Vaught stands out the most to me. He got off to a hot start in the opener and charged to a podium finish, but then was never really heard from again. He entered with a lot of laps at Tucson under his belt, including a thrilling victory in 2013, and just couldn’t match his past success for whatever reason.

I hesitate to call Phillips a loser, just because he was among the fastest cars in Tucson for much of the week and he should be somewhat encouraged by that. Though he lost a couple of chances because of bad luck, TP still put himself in a position to win and was competitive for most of the week.

BS: I think that Terry Phillips had to have had the worst luck of anyone during the course of the week. On more than one occasion he had the fastest car, but mechanical failures or accidents led to DNFs. I'm not sure if it's worse to have bad luck like Phillips or to not be competitive at all.

The week was a definite learning experience for Max Blair, but I felt that he showed improvement throughout the course of the miniseries. I really looked for Vaught to find his way to victory lane at least once at Tucson, but the cards just never lined up for him.

AS: As for the format-fiddling, it seemed like the format these events had used in the past wasn't broken. I'm not sure why they chose to mix it up this year, but by the end of the week they had settled back in with something somewhat similar to where it had been in previous seasons. I think I'd like to see them revert to the old ways moving forward.

TT: Let’s look ahead to next weekend’s three-race stretch at El Paso (Texas) Speedway Park, which hosts major Late Model events for the first time with NDRL action. Andy and I are pretty much in the dark about the westernmost Texas dirt oval, so give it your best shot Ben. What type of drivers do you expect? Have you hear much about the racetrack? Will El Paso ace Garrett Alberson have an edge?

BS: As always I'm looking forward to going to a track for the first time. In the Tucson pit area, many drivers were overheard trying to acquire information on the facility as only a handful have ever seen the place. While I expect a smaller car count than we saw at Tucson — some drivers are heading back home to prepare for Speedweeks or their fun meters are just pegged out — I fully expect to see a strong field of cars there with guys like Moyer, Blankenship, Fuller, Phillips, Gustin, Mars, Diemel, etc.

I know that Alberson is really excited about having a bit of an edge at his home track. Alberson tells me the place is a little smaller than Tucson and semi-banked. He also said that late in the year that changes in track prep resulted in some great racing. Hopefully all of these factors will result in a very entertaining outing during the inaugural Battle at the Border.

TT: Of course, everyone can see the El Paso oval for themselves via DirtonDirt.com’s pay-per-view of all three races, a continuation of the live video the site brought from Tucson. It should be a big time in Texas.