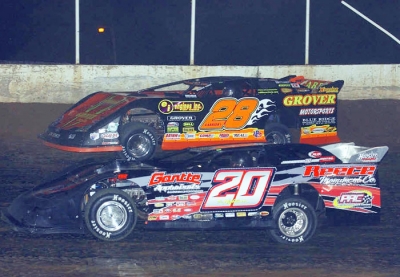 O'Neal, of Martinsville, Ind., started on the pole and built leads of as much as a half-straightaway while holding Owens at bay through the middle portion of the 50-lap event. But Owens was tracking down O'Neal when the leader pulled into the infield about lap 44. Owens, who started outside the front row, led the rest of the way to cross the finish line ahead of Eddie Carrier Jr. of Salt Rock, W.Va., and Brian Birkhofer of Muscatine, Iowa. Lucas Oil Series points leader Earl Pearson Jr. of Jacksonville, Fla., was fourth ahead of Rick Combs of nearby Cincinnati, Ohio. Steve Casebolt of Richmond, Ind., last year's winner, finished sixth after starting 17th at the half-mile northern Kentucky oval.

O'Neal wasn't the only contender to exit early. Hometown driver Darrell Lanigan, who returned to Florence after the World of Outlaws Late Model Series event in Hagerstown, Md., was rained out, made it a three-wide battle for the lead on the 18th lap when he tried to get under Owens in turn three as O'Neal ran the high side. A Lanigan-Owens collision broke a tie rod on Lanigan's No. 29 and he limped around a few more laps before bringing out a caution.

Correction: An earlier version of the story incorrectly reported the lap when Owens took the lead. He led the final six laps.