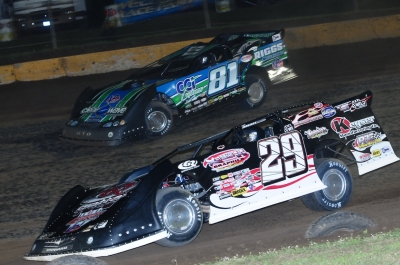 “I used to say Eldora (Speedway) was my favorite racetrack, but I’ve changed now,” James said in victory lane after his $5,000 Corn Belt Clash victory. "I love this place. I’ll be here every time there’s a big one from now on.”

The next big one is coming up quickly with with $50,000-to-win USA Nationals on Friday and Saturday on the World of Outlaws Late Model Series. James will be among the favorites after he blew past polesitter Darrell Lanigan of Union, Ky., on the 31st lap Thursday and dominated the rest of the 50-lap feature.

Lanigan ruled the first half of the race, building a half-straightaway lead and holding a comfortable margin as frontrunners raced into lapped traffic. That traffic proved to be Lanigan's undoing when he tried to work under a slower car of Chub Frank as James quickly caught up, then made an outside pass exiting turn two. James survived a scrape with the backstretch wall in overtaking Lanigan and Frank in one fell swoop.

“Darrell, he left the door open there. It looked like his car was getting a little loose. He got away from me a little bit. I was watching my water temperature. I wanted to keep it in check. It got pretty hot. (The temperature) got it back down to where I could start racing there at the end, and got up after it a little bit,” said James, who started outside the front row.

"Then he got behind Chub there, and there was four of five (lapped cars) there. A lot of times, being in the lead — it’s happened to me a lot — being in the lead is the worst spot to be, and that’s what happened to him. If those guys hadn’t have been there, I probably wouldn’t have gotten by him. But sometimes it’s your day, and sometimes it’s not.”

James went on to take the checkers comfortably ahead of Brian Shirley of Chatham, Ill., who took the second spot when Lanigan briefly got sideways in turn two on the 45th lap. Lanigan settled for third while Kent Robinson of Bloomington, Ind., nursed an ailing engine home in fourth. Don O’Neal of Martinsville, Ind., got rolling on the high side in rallying from his 23rd starting spot to round out the top five on a night when 57 drivers entered action with the Iowa-based tour.

Lanigan, the World of Outlaws points leader, said he simply made the wrong choice in trying to overtake backmarkers in the second half of the race.

“We got up to that lapped traffic and they were making it difficult there to pass. I just chose the wrong groove, and sometimes it’s better to (be running) second on those kind of situations. I should’ve just stayed to the top,” said Lanigan, who often battles James at his home track of Florence Speedway in northern Kentucky. “Scott ran good out there ... I’m happy for him. He did a good job.”

James didn’t mind mixing it up with some familiar faces with Lanigan and two other Indiana drivers finishing in the top five.

“Darrell’s been running great this year. He lives real close to me and we get along pretty good. It was nice to see two guys within 25 miles of each other on the front row tonight, that was pretty cool.

“We haven’t raced as much as I’d like to this year. Circumstances didn’t work that way, but it’s not too late to cash in on a couple of these big ones here in the next two weeks. I’m excited. We’ve got a lot of work to do. I’m tired, I’ve gotta go run tomorrow, I’m out of shape, I promise you I’m out of shape. We need to get back to that. It was fun out there racing and I’m glad I could get another win here.”

The water temperature flirted with danger at 230 degrees in the first half of the race — James said his new Rocket Chassis has a nosepiece so low to the ground it doesn’t allow much air to reach the radiator — but after easing up a bit to let the powerplant cool down, he made his winning move.

The 50-lapper was slowed by a single caution when eighth-starting A.J. Diemel stopped in turn four on the second lap with engine problems. But he wasn’t the only contender to retire in a race where just nine cars finished on the lead lap and 17 were running at the finish.

Mike Marlar of Winfield, Tenn., ran as high as fifth but pulled to the infield on lap 34. Brandon Sheppard of New Berlin, Ill., came from 21st and reached fifth before an overheating powerplant forced him out. And Sheppard’s fellow 11th-row starter, five-time USA Nationals winner Scott Bloomquist of Mooresburg, Tenn., slowed on the white flag lap when he struck a 20-pound weight that fell off another car, crushing his right-front wheel and damaging the chassis.

Notes: James drives a Scott Riggs-owned Rocket Chassis with sponsorship from CCi Systems, Clearwave Communication, Riggs Motorsports and VP Racing Fuels. ... The victory is the fourth of the year for James, but his first away from Florence Speedway. ... He was driving a 2-race-old car that he ran fifth with six days earlier at Florence. ... Runner-up Brian Shirley was making his first start since winning the UMP DIRTcar Summernationals title on July 14 at Oakshade Raceway in Wauseon, Ohio. ... Fourth-place Kent Robinson was driving his backup car after breaking an engine in his primary machine in hot laps; he also damaged the engine in his backup when it lost water in the second half of the race. ... Corn Belt Clash points leader Chad Simpson improved five positions to finish sixth. ... Ross Camponovo of Clarksdale, Miss., was 16th in his Cedar Lake debut. ... Thursday's event was run without time trials, using passing points from heat races and a fast dash to help set the lineup. An incorrect lineup listed Robinson as the polesitter, but Lanigan rightfully took the spot when the cars pulled on the track. Lanigan was fourth in the dash and should've been on the pole after Brian Shirley won the dash, then drew a four-car inversion for the feature. ... Friday’s USA Nationals action continues with a fresh program of time trials and heat races sanctioned by WoO. Consolation races and the 100-lap main event are scheduled for Saturday.