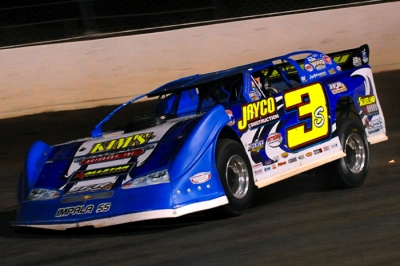 Brian Shirley started from the pole of the Dream in his Pierce Race Car. (jmsprophoto.com)

ROSSBURG, Ohio (June 9) – Give a shout out to the little guys after Dream XVIII.

While Shane Clanton’s win could be a boon for his fledgling Capitol Race Cars chassis brand, Clanton wasn’t the only driver in Saturday’s 26-car field that was on an island of sorts. And he wasn’t the only one who enjoyed some success over the weekend while fielding a lesser-known chassis.

Brian Shirley and Earl Pearson Jr., won’t be comparing race notes anytime soon, but they both understand how Clanton feels. Shirley, who started from the pole, was in a Bob Pierce Race Car, while Pearson, who sat the overall fast time on Friday night, was in a Longhorn Chassis.

All three of the chassis brands are diminutive in comparison to the major chassis builders, yet they stood out at Eldora’s richest event.

Even so, Shirley, of Chatham, Ill., was disappointed in his 20th-place finish after starting from the pole.

“If we could come out with a top five, or maybe a top 10, it would maybe be OK,” said Shirley. “You feel better when you at least come out with a solid finish. It’s more disappointing letting the fans and my crew down.”

Part of Shirley’s dilemma is the learning curve with the Pierce Race Car. Unlike brands such as Rocket Chassis (10 cars in the feature lineup) or Bloomquist Race Cars (five in the main event), there weren’t too many Pierce cars at Eldora for Shirley to compare notes with.

“It’s hard because we’re out here trying and I know (Bob) Pierce and them would be here if little Bobby was old enough,” said Shirley. “It’s just hard to execute everything perfectly. It’s very difficult. Even tonight, I felt like the track was different than in years past. The whole track threw me for a loop tonight.

“But now we’re building a notebook. Hopefully we’ll be able to come back and be able to sit on the pole for the World 100.”

Part of building that notebook includes paying close attention to how the car reacted during the main event and then being prepared to adjust likewise next time. It’s tough though when you’re traveling and there aren’t many drivers to toss around ideas with.

Like Shirley, Pearson, of Jacksonville, Fla., has plenty of notes, but not nearly enough for the Longhorn Chassis, which is funded by former NASCAR champion Bobby Labonte.

“All we can do, is like yesterday, we had good balance in the car and we can take that to other places,” said Pearson, who came from 25th to finish 14th after taking a provisional to get into the race. “When the track got slick tonight, we kinda missed the setup. I know the setup we had tonight wasn’t the right setup, so we’ve got to go home and do our homework and get better.”

Both drivers know it may take a little while to catch up. Pearson pointed to the lengthy process of building cars, selling them and then getting feedback. That’s something that both Capital Race Cars — co-founded by former racer Marshall Green — and Longhorn Chassis struggle with as they continue to grow,

Bob Pierce Race Cars, meanwhile, may have a stronger customer base at this point, but they were nearly equally as scarce at Eldora. That means one thing for Shirley.

“Baby steps,” he said. “We’re kinda on our own here. We need to take advantage of the time on the track and learn from it. This was a new car, so we kinda had a learning curve on it too.

“We’ve got so much work to do to understand what it takes to win one of these 100-lap races. We’ll just keep our head high and keep working at it.”