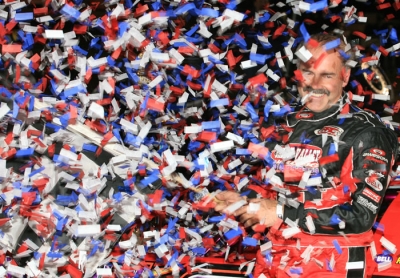 It was the third straight WoO victory for Moyer, a three-time tour champion who is enjoying an early-season run for the ages. On the WoO alone, he's already earned $53,450 in four events.

"Everything is just awesome right now," said Moyer, who started third but led just three laps of the 'Illini 100,' including the final two. "We're just riding it out as long as we can."

Moyer's triumphant performance dashed the hopes of Moweaqua, Ill.'s Shannon Babb, a former Farmer City regular who was hoping to give his hometown fans a reason to party. Babb, 34, was forced to start last rather than his scheduled 19th spot in the 24-car field because he changed two tires after reporting to the track for the feature lineup, but he appeared ready to score a memorable victory when he grabbed the lead from defending WoO champion Steve Francis of Ashland, Ky., on lap 55.

Alas, Moyer found another gear in his Clements-powered Victory Circle M1 Chassis — a machine he has helped develop — and nosed into the lead for the first time on lap 85. Babb regained command the following circuit, but Moyer used the inside groove to slip in front on lap 99 and then repelled Babb's final-corner challenge to cross the finish line less than a half car length ahead. Babb, driving NASCAR Sprint Cup star Clint Bowyer's Traeger Grills Rayburn car, settled for second behind his racing mentor.

"He's had a real good year and I'm tickled to death for him," a gracious Babb said of Moyer. "It was a lot of fun to race for the win with him. I wish we would've won, but I'm happy to run second to him."

Francis finished a close third in Dale Beitler's Reliable Painting Rocket, right in the tire tracks of Moyer and Babb. He started from the pole position and led twice, for laps 51-54 and lap 73, but couldn't stay there largely because he was "a little tight in the middle of the corner."

Tim McCreadie of Watertown, N.Y., came from the 20th starting spot to finish fourth in the Sweeteners Plus Rocket after being unable to overtake Francis in the final laps, and 2006 Farmer City Raceway track champion Wes Steidinger of Fairbury, Ill., who started 17th, made a late-race move to place a WoO career-best fifth in his Rayburn mount.

For much of the distance it appeared that Moyer might finally be mortal. He fell to fifth at the start, then spent nearly three-quarters of the event trying to pass Chub Frank of Bear Lake, Pa., for third.

After Brian Birkhofer of Muscatine, Iowa, who surged from the fifth starting spot to take the lead from Frank on lap 10 and ultimately built the race's largest edge, saw his bid end on lap 50 because he caught a turn-four rut wrong and spun into the wall, Moyer could only watch as Babb completed his march from the rear by passing Francis for the top spot. Moyer was simply too busy with Frank.

"Chub dealt me fits more than anybody on the track," said Moyer, who set a track record of 11.973 seconds around the quarter-mile oval on Friday. "It was a 100-lapper, so I was just trying to be there for the end. But I knew I had a pretty good car if I could ever get by (Frank), and I just couldn't do it for the longest time.

Moyer finally overtook Frank for third on lap 74 — the same circuit that Babb ended Francis's quick one-lap stint back in front. Moyer secured second place on lap 82 when he executed a slide job on Francis between turns one and two — Francis checked up to avoid hitting Moyer and lost ground, but he held on to third — and almost immediately caught Babb.

After being unable to keep the lead when he nipped Babb at the line on lap 85, Moyer was concerned that the race's 10th and final caution flag, on lap 88 for a flat tire on Frank's car, might do him in.

"I didn't want to see that yellow, because (Babb's) crew guys were telling him where I was at on the track," said Moyer, who opted to run four 30-compound Hoosier tires under the event's UMP DIRTcar 10-20-30-40 rule. "He kinda took my line on the restart, so I had to drive by the seat of my pants.

"At the end I went back down to the bottom. He probably should've stayed there, but he went up (higher) searching around (for traction) and I was able to get a run on him (for the lead coming to the white flag). I don't know if I would've beat him if he had stayed down there."

Babb, who won last year's WoO event at Farmer City, mourned a final sprint to the finish that was a couple laps too long for him.

"I figured (Moyer) probably wasn't good in the stop-and-go deal on the bottom, so I took his line a little bit (after the last restart)," said Babb, who ran three 20-compound tires with a hard 40-compound shoe on the right-rear. "But 12 laps to go was a little bit too long. I was soft on the left-rear (tire), and it kinda died on me. It was good for about five laps and then I had to search (for more traction)."

Babb nearly found enough bite with an inside charge through turns three and four on the final lap, but he fell short by a matter of feet.

"I turned off of four and had good traction, but he barely beat me to the line," said Babb. "It's hard to make up a car length when your cars are equal."

With the venerable fairground track's standing-room-only crowd charged up by the exciting finish, Babb rehashed their battle in victory lane.

"I just told him, 'Congratulations,' " said Babb. "He's a tough old fart. He's gonna keep beating us up as long as he can."

Moyer has won multiple races at Farmer City over the years, including the 2006 WoO event, but he knows he earned his money in the Illini 100.

"It was fun tonight," said Moyer, the current series points leader. "This is home for (Babb). I knew he'd run good here. On that (one-way) radio when (the officials) gave the lineups, I kept hearing him getting up through there, and I was like, 'He's coming.' "You gotta run good here to beat him."

Finishing in positions 6-10 was Josh Richards of Shinnston, W.Va., who maintained second place in the WoO points standings; Rick Eckert of York, Pa., who debuted a new Rayburn car; Darrell Lanigan of Union, Ky., who used a provisional to start the feature; Steve Sheppard Jr. of New Berlin, Ill., who recovered from pit stops to change flat tires on laps 32 and 52; and Darren Miller of Chadwick, Ill.

Notes: Besides Babb's penalty for changing tires, Darrell Lanigan, Ryan Dauber, Kevin Weaver and John Blankenship were penalized for arriving late to the racetrack, shuffling the order of the last few rows. ... Brian Shirley an in the top five early, but he nipped the turn-four wall on lap 29, slid over the frontstretch banking, and never contended again. He had a flat tire on lap 63. ... The draw for the first three rows was held in front of the grandstand before two consolation races. ... Fifth-starting Shannon Babb, who slipped over the backstretch banking in his heat race, rebounded to win the first consolation over Tim Lance, who started third. Polesitter John Blankenship was third but should be in line for a provisional starting spot. ... In the second consolation, Tim McCreadie cruised to a huge lead, then calmly handled a slip over the turn-two banking before resuming his domination. Kevin Weaver, who started alongside McCreadie on the front row, held off fellow Illinois drivers Matt Taylor and Jason Feger. McCreadie's teammate Vic Coffey ran second early after an excellent start but faded to finish a distant fifth. ... Track crews worked on filling and repairing portions of the track in turns one and two before the modified consolations ... Forty-four of the original 55 entrants returned for Saturday's action, leaving 24 for the main event and 20 for the non-qualifiers' race, an event scheduled to pay the same as Farmer City's weekly purse. Feger won the event, the final race of the night.