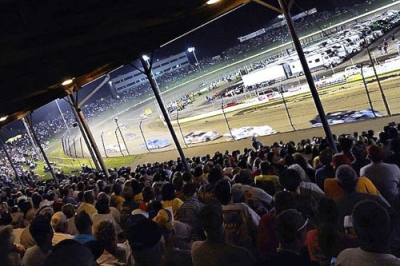 The $100,000-to-win Dream XVIII presented by Ferris Commercial Mowers, scheduled for June 8-9, will see $20,000 added to the purse and an innovative format that provides more competitive laps for fans at the Tony Stewart-owned oval.

With help from the Briggs & Stratton Power Products Group and its Ferris brand, the event’s new sponsor, that total purse reaches nearly $210,000 and more than half the 26 starters in the 100-lap feature will see an increase in prize money, including a hefty $1,750 for 24th position, a $250 increase.

Much of the weekend’s happenings will be familiar — two rounds of Friday time trials, Saturday’s 100-lap feature and the $100,000 winner’s purse — but the pursuit towards that rewarding payday will take on a decidedly different look in 2012.

Instead of locking in 120 entrants, this year’s time trials will lock 60 drivers into Saturday’s 15-lap heat races. The balance of those 20-car lineups to be determined by the results of the newly added Friday qualifying features.

Each Friday qualifying feature will pay $1,000-to-win and carry full UMP DIRTcar points, part of a push to give the organization’s weekly drivers ways to remain competitive in the overall title chase while away from their home tracks.

The excitement and drama carries over to Saturday’s time honored heat races, with inversion of the heats to be determined via the fan favorite Wheel of Misfortune by Friday’s quickest driver.

The top three finishers in each of six heats transfer to the main event. Finishers 4-6 go to the B-Main and finishers 7-10 head for the C-Main in races that have both seen purse boosts. Eldora added yet another twist for the consolation races.

While the top six finishers from the C-Main transfer to the B-Main, the non-transferring cars from the C-Main will remain on the track for a five-lap scramble that pays $1,000-to-win along with UMP DIRTcar points.

Again after the B-Main, which transfers six drivers to the 100-lapper, another five-lap scramble will ensue for another $1,000 payday and points.

The Dream concludes a big week at Eldora that starts with June 6’s Feed The Children Prelude to the Dream, Wednesday’s charity all-star race that features NASCAR and other auto racing stars in a Dirt Late Model showdown.

Eldora tickets and campsites are available by calling the track office (937) 338-3815 or online at eldoraspeedway.com.