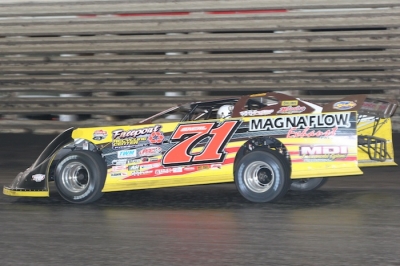 But a critical miscue by Owens on Knoxville Raceway's tricky high-side cushion in turn two damaged his car's nosepiece, causing a near-spin exiting turn four on lap 96 that allowed Don O'Neal to sweep into the lead. | Complete Knoxville coverage

O'Neal, who himself battled the treacherous high groove most of the Lucas Oil Late Model Dirt Series event, safely kept his Moring Motorsports No. 71 out front the final five laps for a $40,000 payday in one of the sport's most lucrative races.

"It was really about anybody's race," said O'Neal, who watched Owens go from unbeatable to vulnerable amid a stretch of three cautions from laps 88-93. "It was was so easy to mess up up there — and he was finally human and he messed up, too."

O'Neal, a 47-year-old veteran from Martinsville, Ind., making his first appearance at Knoxville since a controversial, injury-causing accident in 2005, notched his ninth victory of the season and third paying at least $25,000. It was his fourth 2011 victory in the Illinois-based Larry Moring-owned car that O'Neal moonlights in when he's not piloting the MasterSbilt house car.

The eighth-starting O'Neal took the lead from front-row starter Austin Hubbard of Seaford, Del., on the 24th lap and led through the middle stages of the 100-lapper. But when Owens went underneath him in turn one on the 60th lap and immediately pulled away as a lapped car on the backstretch hampered O'Neal, it appeared as if everyone was racing for second.

Owens, who said his "car was just perfect," slipped back to fifth at the finish and let a golden opportunity for his first career victory at the historic sprint-car stronghold go by the wayside.

"It's just kind of a bummer," said Owens, who won Thursday's semifeature. "Everybody's running that cushion and it's kind of heavy up there, and someone I think had kicked up a big old clod of mud there. When you roll in, you're committed to an area, and you're there, and I hit that, and I was done after that."

The right-front corner of his car's nosepiece, and a bent bumper, dug into the racing surface in turn four a half-lap later, and Owens was lucky to hang onto a car that got sideways in front O'Neal, runner-up Steve Francis of Ashland, Ky., and third-place finisher Brian Birkhofer of Muscatine, Iowa.

Fifteen-year-old Tyler Reddick of Corning, Calif., avoided a near-tangle with Birkhofer exiting turn-two on the final lap to finish fourth from his 16th starting spot. Owens was fifth followed by Billy Moyer of Batesville, Ark., and Hubbard, the only drivers on the lead lap in the 33-car field.

Francis, whose red No. 15 lost an air cleaner in the race's late stages, pocketed $20,000 for his richest payday of the season.

"It was a heckuva a race there. The fans that stuck around to see them last 10 laps, they were pretty exciting," said the 12th-place starter. "Me and Birky, we had one heckuva race for a long time. Then we got up there when Don and Jimmy were mixing it up, they let us get up there and start mixing it up with 'em. One time I think we were four-wide off (turn) four for the lead. Definitely we'll take (second) and be happy."

Birkhofer, winner of the inaugural Knoxville event in '04, said he was fortunate to finish third after struggling the last two-thirds of the race.

"I should've run about seven or eighth. I had fun them last 10 laps watching these guys be animals, though," said Birkhofer, who won Friday's semi feature. "Steve actually came up and past me and I got back to the bottom and got a little bit better. But my car wasn't right. It was just fortunate to watch, I was able to watch them and get a better paycheck than what I deserved, really."

Acknowledging his car wouldn't work on the high side, he was impressed by O'Neal's ability to maintain consistent speed riding along the inconsistent cushion.

"If you give Don O'Neal the opportunity to win a race with eight (laps) to go, and the way the track was, I'm probably going to put my money on him, too," Birkhofer said.

Hubbard jumped into the early lead over the pole-starting Birkhofer and built a half-straightaway lead while O'Neal quickly moved to the front from his fourth-row starting spot. O'Neal took third from Scott Bloomquist on the 16th lap, grabbed second from Birkhofer and then slid under Hubbard to lead lap 24 just before the first caution appeared for a slowing Chris Simpson.

Eight cautions over the next 21 laps slowed the event — none for major incidents — while Hubbard and 22nd-starting Jimmy Mars of Menomonie, Wis., chased O'Neal along with Birkhofer and Owens. Bloomquist fell from contention when he pitted on lap 45 to check for a possible fluid leak.

The longest stretch of green-flag racing followed — 43 circuits — and Owens got rolling, reaching the second spot by lap 55 and erasing O'Neal's half-straightaway lead before taking command on lap 60.

Hubbard regained second from O'Neal, but when he got squeezed into the backstretch guardrail by the lapped car of Brady Smith, O'Neal regained the spot as Hubbard faded.

Mars fell out of fourth with powerplant failure — his second of the weekend — on the 88th lap to draw a caution that erased a comfortable lead for Owens. O'Neal turned up the heat on Owens the lap-88 restart and again on a lap-92 restart, trying to get outside Owens at the flagstand and once briefly pulling alongside.

O'Neal dove past Owens and into the lead on lap 93 in turn three, but that move was erased by the final caution for debris. Owens again thwarted O'Neal on the restart and edged away for a few laps before his slipup on the cushion set up the late-race dramatics.

Notes: O'Neal's Moring Motorsports MasterSbilt Race Car is sponsored by Magnaflow Exhaust, Freeport Recycling and MDI Environmental Systems. ... While O'Neal hadn't raced at Knoxville since '04, he planned to pilot Moring's car at last season's Knoxville Nationals, but his trip was canceled because O'Neal was hospitalized with diverticulitis. ... O'Neal's 2004 accident in turn three knocked him unconscious and sent him to a Des Moines hospital for four days with two cracked vertebrae at the base of his neck, a concussion and broken shoulder blade. Jimmy Mars and John Vandeberg, caught up in the accident, were restrained by track personnel and police in showing their anger at O'Neal for the wreck. ... Ten cautions slowed the action in Saturday's 100-lapper: Chris Simpson slowed (lap 24); Chad Simpson spun on backstretch (lap 29); Jared Landers and Scott James tangled on the backstretch (lap 31); Brian Shirley slowed (lap 35); Darrell Lanigan got into the turn-two wall (lap-35 restart); Mike Marlar slowed (lap 41); Scott Bloomquist slowed (lap 45); Jimmy Mars stalled (lap 88); Brian Harris stopped on backstretch with a faulty battery (lap 92); and debris (lap 93). ... Next up on the Lucas Oil Series is a Georgia swing Oct. 8-9 at Dixie Speedway in Woodstock and Rome Speedway. Both races pay $10,000-to-win.