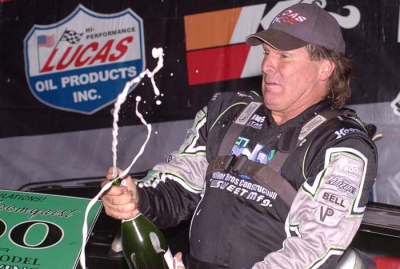 Bloomquist, winning Brownstown's biggest race for the third time but first since '91, stretched his series points lead and enjoyed a champagne-spraying celebration in victory lane at the quarter-mile oval in southern Indiana.

"I have to thank so many people for getting to 500 wins," the 46-year-old Bloomquist said. "I wish (long-time sponsors) Bob and Barb Miller were here to see this, they have been such an important part of my career. My wife, daughter, and my mom are here so I am glad they got to see this.

"To win No. 500 here at Brownstown is special. It has been one of my favorite tracks to run on in my career — somebody said we got our 200th win here in 1991. The first time I came here, I don't think I even made the race. The locals were so tough here to beat and with all the traveling guys racing it was quite a chore just to get into the field."

Bloomquist, who started in third in the 100-lap affair, took the lead from O'Neal on the fourth circuit. Owens took over the second spot on lap six and challenged Bloomquist for the lead up until lap 11, when O'Neal regained the second spot. O'Neal then picked the pace as the top three put on quite a show for the race lead.

Bloomquist entered heavy traffic by lap 26, but a lap-40 caution gave the leader clear racetrack On the restart Bloomquist pulled away from O'Neal and Owens as he set sail throughout the middle stages.

But his 12-length lead nearly disappeared with 25 laps remaining as Bloomquist struggled while negotiating lapped traffic.

Bloomquist worked his way through the lapped cars and put plenty of distance between himself and O'Neal by the time the checkers flew.

Three cautions slowed the race, first for Zack Dohm on the ninth lap. Dale McDowell, the race's first retiree, drew a lap-11 yellow and Earl Pearson Jr. was part of the final caution on lap 40.