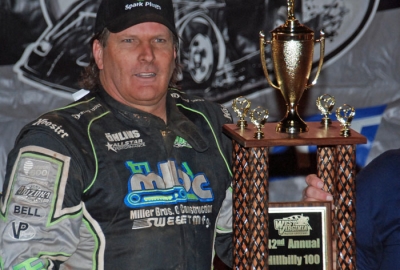 MINERAL WELLS, W.Va. (Sept. 5) — The Hillbilly 100 was on a short list of major Dirt Late Model events that Scott Bloomquist hadn't won. You can check it off the list now.

Taking the lead from Don O'Neal on the 82nd lap, Bloomquist led the rest of the way at West Virginia Motor Speedway on Sunday for the $42,000 victory, the 24th Lucas Oil Late Model Dirt Series victory of his career and seventh of the season. | Video | Slideshow | Prelims and blog-style reports from Sunday's race

"A hundred laps here are kind of tough on equipment," said the 46-year-old Bloomquist in victory lane. "I can't say enough about the Hoosier Tires, they held up real well tonight. We were a little cautious through traffic, and O'Neal was running hard on the cushion and I saw that and backed off a little bit and then his tires went away and we were able to get by him for the win."

The reigning series champion extended his points lead in leading 47 laps at the massive 5/8-mile oval, which hosted the Carl Short-promoted Hillbilly 100 for just the second time and first since '85.

Jonathan Davenport of Blairsville, Ga., finished a half-straightaway behind Bloomquist for second while Steve Shaver of Vienna, W.Va. — aiming for his fourth straight victory at WVMS this season — was third. O'Neal, who had a flat right-rear tire just after losing the lead to Bloomquist, was fourth and Eddie Carrier Jr. of Salt Rock, W.Va., was fifth. Zack Dohm of Cross Lanes, W.Va., was the last driver on the lead lap in sixth in a race slowed by frequent cautions.

Donnie Moran of Dresden, Ohio, started 10th and worked his way up to third but fell from contention with mechanical problems on lap 68 in a race witness by a huge crowed on the terraced hillside at WVMS.

Bloomquist started outside the front row and jumped into the lead at the outset while Dale McDowell of Chickamauga, Ga., winner of two of the previous three Lucas Oil Series event, ran a solid second for 14 laps until O'Neal slipped past.

O'Neal began his pursuit of Bloomquist and briefly pulled ahead on lap 22 amid traffic. Seven laps later, O'Neal made a pass stick and stayed in control through a series of caution flags and two red-flag periods through the middle stages of the race.

At the halfway mark, O'Neal led Bloomquist, Shaver, Bart Hartm and Davenport, but Hartman would be among several drivers to drop out as just a half-dozen cars stayed on the lead lap by the finish.

A lap-81 restart changed the race's complexion as Bloomquist overtook O'Neal on the restart. O'Neal slipped back a few more spots before slowing in turn four with a flat tire.

Davenport took up the charge, but he could never get within striking distance of Bloomquist the rest of the way as the Hall of Fame driver checked off his Hillbilly to-do list.

Notes: Bloomquist's self-designed chassis has a Roush Yates Engine and sponsorship from Miller Bros. Coal and Hawkeye Trucking. ... Some teams fretted about using all the fuel in their tanks in 100 laps at the huge oval, but no one appeared to run out of gas; several teams added fuel during mid-race pit stops. ... The most serious race stoppage was on lap 62 when Brad Neat slammed hard into the turn-one wall; he wasn't injured but his No. 41 was heavily damaged. ... Ray Cook hit the wall between turns three and four after a lap-57 restart when he lost his brakes at the high-speed oval. "The pedal went to the floor," Cooks said. "That ain't a good feeling here." ... The Lucas Oil Series returns to action with a Sept. 17-18 weekend in Virginia. Winchester Speedway hosts the tour Friday while Virginia Motor Speedway in Jamaica hosts the tour Saturday for the $15,000-to-win USA 100.

Correction: Fixes Hillbilly 100 was previously held at WVMS in 1985