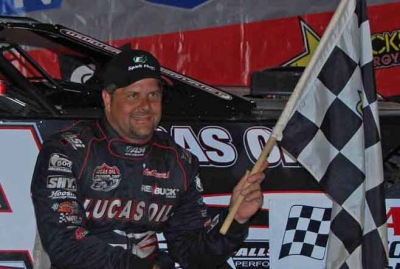 Pearson took the lead from series points leader Scott Bloomquist of Mooresburg, Tenn., on the 30th lap and stayed in control the rest of the way at the 3/8-mile oval in eastcentral Mississippi. | Slideshow | Prelims | Video

“I want to first thank all these fans for coming out here tonight, it was hot and I’m sure they saw a good show,” said the 38-year-old Pearson, whose 23rd career victory tops the all-time series list. “I have to thank Lucas Oil Products, Red Buck Cigars, MasterSbilt Race Cars and Larry Wallace Racing Engines for all of their support. I also want to thank my car owner, Bobby Labonte, my crew Jason, Matt, and everybody back at the shop. The car was fast from the time we unloaded it on Friday.”

Outside front-row starter and series rookie Eric Wells of Hazard, Ky., bolted out to the early lead, controlling the race until Bloomquist took charge on lap 20. But Pearson’s smooth inside move dropped Bloomquist to second 10 laps later.

Pearson built a healthy lead over what turned out to be torrid battle for second among Bloomquist, Ray Cook of Brasstown, N.C., and Billy Moyer of Batesville, Ark. The trio fiercely fought for the second spot most of the race with Moyer solidly claiming the position by lap 71.

Moyer closed on Pearson’s seemingly insurmountable lead, drawing with five lengths, but he suddenly slowed on the frontstretch and pulled to the infield on lap 79.

Bloomquist regained the second spot and, after the final restart, challenged Pearson over the final three laps but couldn’t catch Pearson.

“I want to thank (promoter) Johnny Stokes for the great racetrack he gave us tonight,” said Pearson, whose victory followed a pair of Ohio victories July 3-4 at Muskingum County Speedway and Portsmouth Raceway Park. “You could run anywhere on the track. Eric ran well in the beginning of the race; when Scott got around us, I knew it was going to be a tough race for the lead.”

Notes: The event was presented by the Columbus Convention and Visitors Bureau. ... In Pearson’s three recent victories, Cook and Bloomquist have both posted top-three finishes each time. ... The race was taped by Speed and is scheduled for telecast on July 31. ... Lucas Oil competitors return to action July 16-17 at Tri-City Speedway in Granite City, Ill., and Lucas Oil Speedway in Wheatland, Mo. Both events pay $10,000 to the winner.